Polish organizations in Lithuania under criticism for homophobic T-shirts

(1)
BNS
aA
LGBT groups on Thursday expressed regret over the choice of Polish organizations in Lithuania to wear homophobic T-shirts with slogans Vilnius on Bicycles without Pedals (Wilno Na Rowerach Bez Pedalow) during their recent congress. 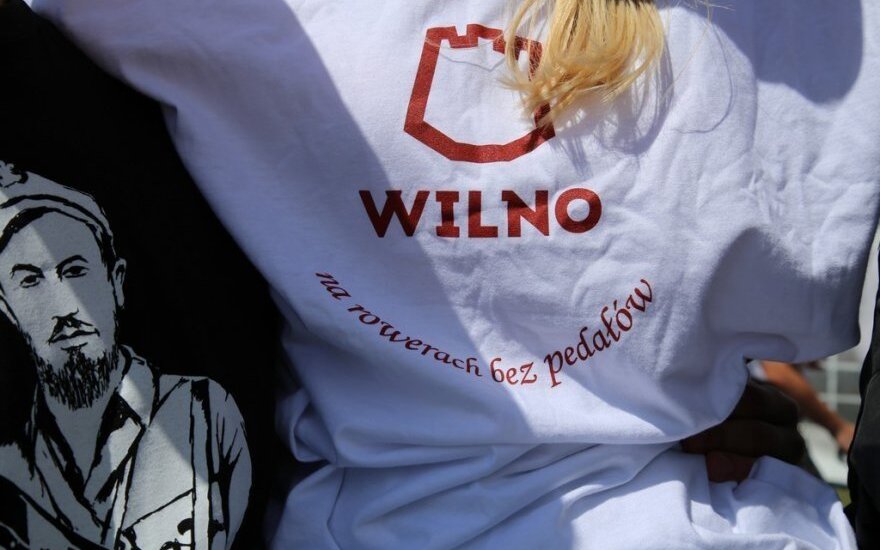 Vladimir Simonko, the leader of the Lithuanian Gay League, said the word "pedal" was an insulting way of referring to the LGBT community.

"We regret the use of such vocabulary in public events co-organized by political parties financed from the Lithuanian state budget," Simonko told BNS.

He expressed hope that the homophobic statements by some organizations do not reflect the general position of Lithuania's Polish-speaking citizens.

The T-shirts were worn at the July 11-12 congress of the political party, the Electoral Action of Poles in Lithuania, and its close ally, the Polish Union of Lithuania. Photographs of participants wearing the T-shirts are published on the party's website.

Vilnius City Municipality said its lawyers were looking into the use of part of the Vilnius trademark on the T-shirts without its consent.

"The municipality does not tolerate and will not tolerate any type of discrimination on the grounds of nationality, race, religion and gender. The Public Relations Division, with the help of the Legal Department, are already looking into the case. We are expected lawyers' conclusions on the public use of the trademark," Neringa Kolkaitė of the municipality told BNS.

She noted that none of the official trademarks of the Lithuanian capital include the Polish-language name of Vilnius, Wilno.

MEP Valdemar Tomaševski, the leader of the Electoral Action of Poles in Lithuania, assured that the slogan was not an insult to LGBT people.

"Everyone is a free and can wear whatever T-shirts they need to. I believe we should not start looking for problems where they don't exist. The times have passed when people wore uniform clothes (...). If someone wants to criticize, it is their right, however, I think this is not the case. We are tolerant as citizens of Lithuania, everyone knows that," said the MEP.

He refused to specify whether it was the Electoral Action of Poles in Lithuania that ordered the T-shirts.

"People are free, the topic has been exaggerated. There were about 2,000 people. If someone has nothing else to do than walk around the congress and read slogans on T-shirts – this is not serious," said Tomaševski.

The Lithuanian Equal Opportunities Ombudsperson's Office has opened a probe into the reported wearing of homophobic T-shirts.

"We have the right to initiate our probes, and we exercised the right in the light of the information available in public. The probe has been opened and I will refrain from further comments, as everything should be clear after the probe," equal opportunities ombudswoman Agneta Lobacevskytė told BNS on Thursday.

"We will seek to make the probe fast, it should be as thorough as possible, we will provide the conclusions as soon as it is over," said the ombudswoman.