Personal stories from the Holocaust in Lithuania told in new website

EN.DELFI
aA
“We drank tea using the observational method: we would hang a sugar cube by a string and sip tea while looking at it. This didn’t make the tea taste any sweeter, but it cheered us up," wrote Tamara Lazersonaite in her memoirs. She was the daughter of professor Vladimir Lazersonas, the pioneer of clinical psychology in Lithuania. Professor Lazersonas and his family drank their ostensibly sweetened tea in the Kovno Ghetto.” This is how the Lazersonas family, who were part of Kaunas intelligentsia before the start of World War II, are introduced in the new website stumblingstones.lt, a press release from manoteises.lt states.
Sekite svarbiausias naujienas socialiniuose tinkluose! 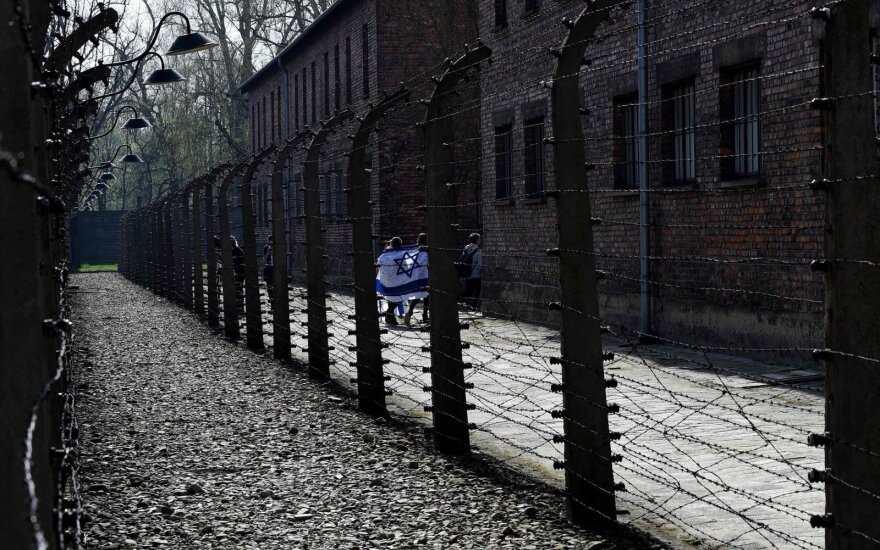 The pioneer of clinical psychology in Lithuania and his wife, doctor Regina Lazersoniene-Safochinskaite were incarcerated in the Kovno Ghetto. They both later died in concentration camps. Only two of the three Lazersonas children survived the Holocaust.

“At stumblingstones.lt, readers can find even more personal, humanely told stories about Jewish and Romani people commemorated in Stumbling Stones placed around Lithuania. Some of their stories can also be heard in video recordings, narrated in first-person by people related to the Holocaust victims by professional, national or familial ties,” says Jūratė Juškaitė from the Lithuanian Centre for Human Rights, the organisation behind this website.

In Kaunas, a Stumbling Stone was placed to commemorate Isaac Anolik, the first Lithuanian representative at the Olympic Games, whose story is narrated by Daina Gudzinevičiūtė, president of Lithuania’s National Olympic Committee. The story of Samuel Petuchauskas, a prominent member of the Šiauliai local government, is retold by his son, professor Markas Petuchauskas, who was himself imprisoned in the Vilnius Ghetto.

Visitors of the new website will also find stories about four Romani women who died or suffered greatly during the Holocaust. The story of Anastazija Jablonskienė-Bagdonavičiūtė, mother of 18 children who was shot dead at Pravieniškės concentration camp, is told by her granddaughter. The website also remembers Ona Matuzevičienė-Bagdonavičiūtė, who was pregnant when she walked from a concentration camp in Western Europe back to her native Panevėžys.

Stumbling Stones were created by the German artist Gunter Demnig. Lithuania became part of the world’s largest open-air memorial museum in 2016. Lithuanian Centre for Human Rights has installed 19 Stumbling Stones commemorating Romani and Jewish victims of the Holocaust in four major Lithuanian cities: Vilnius, Kaunas, Šiauliai and Panevėžys. There are over 60,000 of these memorial plaques around the world, 23 of them in Lithuania.

The four memorial plaques placed in Panevėžys are so far the only symbols in Lithuania commemorating the Romani Holocaust.

The Stumbling Stones art project is open to the public. Memorial plaques can be placed to commemorate any person who died or experienced suffering during the Holocaust. For more information on how to do this and the project itself visit stumblingstones.lt.

Ground-breaking ceremony for "The Lost Shtetl," a unique museum and memorial complex in Lithuania designed by Lahdelma & Mahlamäki architects

On Friday 4th May the ground-breaking ceremony will take place in Šeduva, Lithuania, for The Lost...

The construction of a modern museum telling the story about Litvak towns, their history and culture...

Around one hundred people on Wednesday took part in the 11th March of the Living to honor the memory...