Participants of Mission Siberia'18 return to Lithuania from Kazakhstan 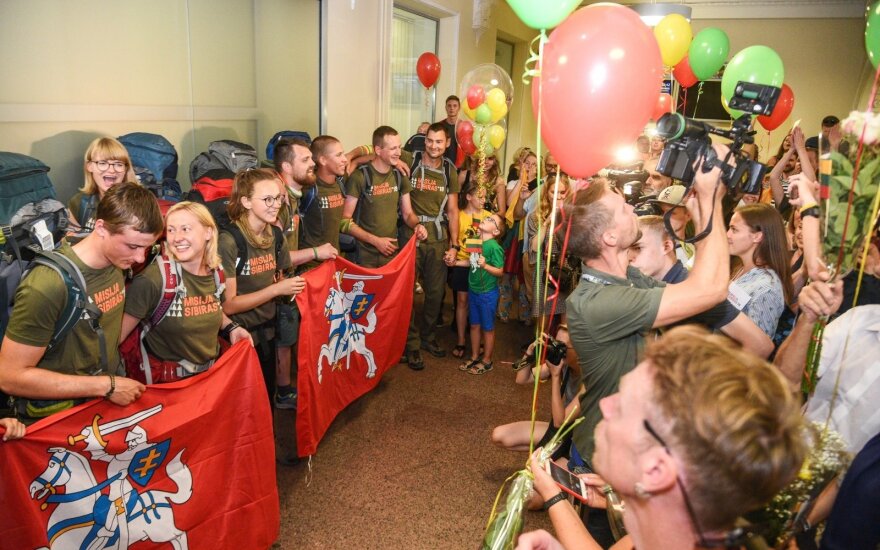 Mission Siberia'18 participants had to change their plans and go the Central Asian country after the Russian embassy refused to issue them visas in late June, less than a month before their planned departure to places of deportation of Lithuanians in the Siberian region of Krasnoyarsk.

The team of 24 was welcomed at Vilnius Airport by around 50 people, friends and family, with flowers and balloons in the colors of Lithuania's flag.

Members of the team had been preparing for heat in Kazakhstan, and it rained for the major part of the expedition and temperatures often dropped below 10 degrees centigrade, which was one of the most serious challenges.

"To stand before a cross we built with our own hands and sing the Lithuanian anthem is an indescribable feeling. It’s so cool!" Domas Zenkevičius, 18, told BNS Lithuania.

In his words, changing weather conditions let them feel at least some of the so-called "hell on earth" Lithuanian political deportees felt.

Agne Goldbergaitė, 27, another participant, says the biggest impression was to find a Lithuanian grave at a dilapidated cemetery.

"Both physically and emotionally many things were completed, but the most difficult things included weather conditions and never-ending huge dilapidated cemeteries. If you find at least one Lithuanian grave in an hour, it becomes a great gift. We built crosses in the rain and during the heat, at night, so it was a lot of team work," she told BNS Lithuania.

The team spent 10 days in Kazakhstan and visited the areas of Karaganda, Balkhash, to Dzhezkazgan. They travelled around 3,000 kilometers, tended to 200 cemeteries and built six crosses, with the highest of them being around 5 meters high.

Around 20,000 political prisoners from Lithuania were held in several tens of Gulag camps in what was then the Kazakh Soviet Socialist Republic.

Over 150 Lithuanian burial sites in Russia, Kazakhstan and Tajikistan been cleaned up since the launch of Mission Siberia expeditions back in 2006.

Some 280,000 people from Lithuania were sent to forced-labor camps or deported during the Soviet occupation period.

Mission Siberia expeditions have been organized since 2006.

No one can deny truth about genocide against Lithuanian people - Grybauskaitė

No artificial barriers can prevent young people from honoring the memory of the victims of Stalinism,...

Lithuania's Mission Siberia will go to Kazakhstan this year

Representatives of Lithuania's annual Mission Siberia expedition, organized to tend to the burial...

Lithuania's former political prisoners and deportees called on Russia during their convention on...