BNS
aA
More than 150 witnesses have been interviewed in the January 13 attempted coup case in the Vilnius court, the Prosecutor General's Office said. 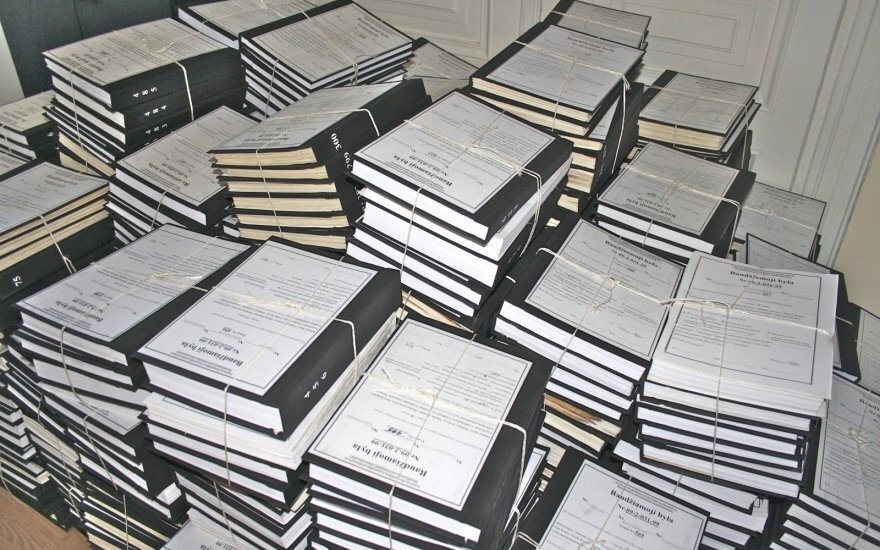 Files related to the January 13 case

Prosecutors of the office's Criminal Prosecution Department in charge of the probe, all victims or their representatives who have appeared in court hearings have already been heard. Witness interviews are currently in progress.

The main case of the 1991 coup case was handed to the Vilnius court on Aug. 31 of 2015, with the criminal case of other defendants handed to court on July 3 2017. The court merged them and now hears them as one.

In the case, charges of crimes against humanity and war crimes were brought against 67 individuals, all citizens of Russia, Ukraine and Belarus who at the time held top positions in the Soviet Union's communist party, ministries of defense and interior affairs, the State Security Committee (KGB) and paramilitary units of the institutions.

Two defendants are present in the courtroom, while the rest stand the charges in absentia, as they are hiding from justice abroad.

The prosecutors said this was the first case in Lithuania with all investigation materials digitized. The decision was taken to make the proceedings simpler and because of the historic value of the documents. The prosecutors received assistance from the central state archives, which restored more than 1,500 archival documents that were in very poor condition.

The pre-trial investigation was conducted by a task force of three prosecutors of the Criminal Prosecution Department of the Prosecutor General's Office and an officer of the Lithuanian Criminal Police Bureau.

Fourteen people were killed in early hours of Jan. 13 of 1991 when Soviet units stormed the Vilnius TV Tower and the Radio and Television Committee Building in an attempt to overturn Lithuania's legitimate administration.

A Vilnius court on Wednesday decided to merge two cases of the January 13 trial into one –...

The Vilnius Regional Court on Monday resumed, after a break of more than two months, proceedings in...

The Lithuanian Prosecutor General 's Office said it had handed to court another part of the January...

Russia has refused to hand summons to the Soviet Union 's former leader Mikhail Gorbachev for...

The Vilnius Regional Court has cancelled hearings, scheduled for this week, in a mass trial related to...

Free legal assistance will be offered to victims of the January 13 1991 attempted coup in the case...