BNS
aA
Over 100,000 worshipers have gathered on Sunday morning in Lithuania's second-largest city of Kaunas for the Holy Mass celebrated by Pope Francis. 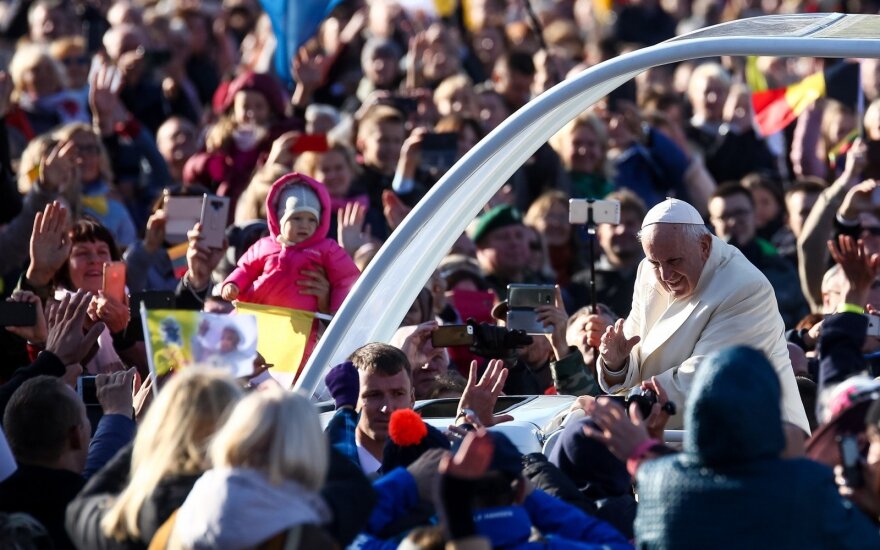 People have been singing psalms since early morning, watching documentaries, sharing testimonies. People have also brought flags and chairs to the service.

The pope arrived in an open popemobile and was greeted by cheering crowds waving flags of Lithuania and the Vatican.

Organizers say over 100,000 people gathered in the Santaka Park in Kaunas, and around 200 foreign journalists have come to cover the event.

Addressing the faithful ahead of the service, Bishop Kęstutis Kevalas said the Church's support is very important in consolidating Lithuania's freedom

"We have overcome external occupation. We know what it means to stand with prayer against tanks, what it means to form the Baltic Chain and experience unity. We know God's word works, " he said. "Today we need encouragement for hope, to not to leave the freedom project midway."

25 years ago and three years after Lithuania regained independence then Pope John Paul II celebrated the Holy Mass in the Santaka Park.

Tomas and Elena Petrauskas came to Kaunas with their daughter who is in a wheelchair and say they just could not miss the historic event.

"We don’t want to miss the first messenger of God. He came to Lithuania to see us, so to stay in bad would be negligence," Tomas, 32, says.

"It will be really interesting for our daughter to learn that her parents were a bit crazy and brought her so early in the morning," Elena smiled.

Aldona Pečiukaitė, 82, came to Kaunas from Raudondvaris and says her faith was her support during the exile in Siberia. She also reminisced seeing Pope John Paul II in 1993.

"I really want to see the pope for the last time," the woman said.

Gitana Buivydienė, 44, came from Vilnius and hopes the Holy Mass celebrated by the pope will held to strengthen her faith.

"Pope Francis is a very grave shepherd, we can say he's revolutionary. He's very humble and is capable of satisfying himself with small things," the woman said.

Pope Francis arrived in Lithuania on Saturday. In Vilnius, he met with state leaders and addressed worshipers from the Gate of Dawn chapel and the Cathedral Square. Organizers say 60,000 people came to greet the pope on Saturday.

In Vilnius, Pope Francis called on Lithuania to take strength from the nation's past and be tolerant and resistant to those who sow division taking advantage of the sense of insecurity.

The Holy Gather also called on young Lithuanian to resist such individualism that excludes people from each other, making them egocentric and arrogant.

On Sunday afternoon, the pope will return to the capital to honor the memory of victims of the Soviet and Nazi regimes.