aA
'Wonderful Losers. A Different World", from Lithuanian film director Arūnas Matelis, was awarded the Best Documentary Feature at the 33rd edition of the International Warsaw Film Festival (WFF). As the winner at one of the top eight 'A' class film festivals (along with Cannes, Venice and Berlin) in Europe, Arūnas Matelis' documentary will also be eligible in the selection for the European Film Academy Awards, Kino Komunikacija wrote in a press release. 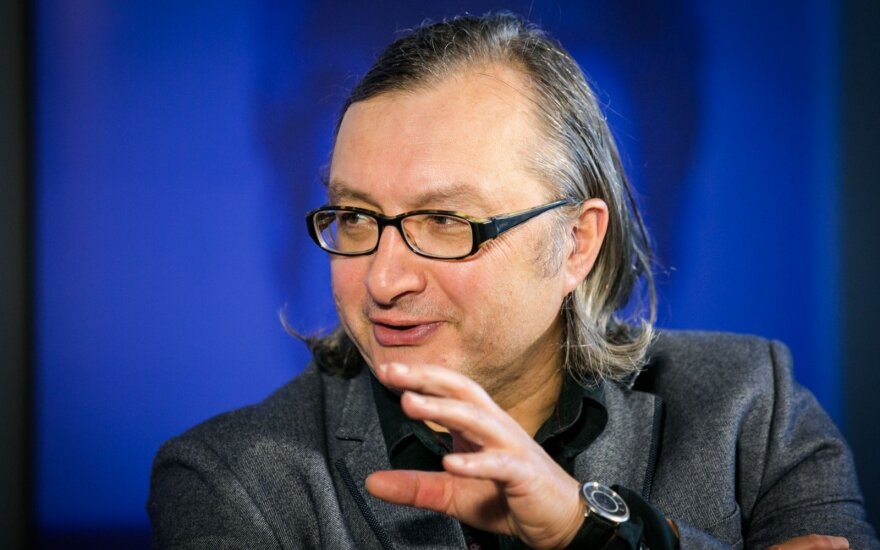 'Wonderful Losers. A Different World" uncovers the invisible side of "Giro d'Italia" - one of the harshest as well as one of the biggest cycling races in the world. Despite its popularity, few people know about the complex, hierarchical structure of the race which often bears similarity to monastic rules, including unconditional acceptance and self-sacrifice. The film focuses on cyclists who always ride in the back, carry the water for others and are destined to lose at the very beginning of the race - the so-called "gregarious"/"domestique", the monks of professional cycling, ready to overcome enormous challenges in order to help the leader of the team win the race.

"It's a film that immerses you into its world from the first seconds. With every frame the cyclists' pain becomes more and more that of your own, their wounds gradually become yours, and only when everything ends you are able to go back to your own reality. This story can be as mesmerizing even for those who don't fancy cycling races or don't even cycle themselves - it's about passion and sacrifice for a common goal, a sacrifice for another person", - claims Stefan Laudyn, the director of the WFF.

Film director Arūnas Matelis highlights the importance of winning the Best Documentary Feature at the WFF, claiming that the stories selected by this festival are among the most powerful in the world. Winning in the competition programme is a remarkable accomplishment for any film director, and he feels honored to have been able to present an eight-year long production to the international audience.

"The film lasts 71 minutes and it took me the same amount of time to answer the questions from the audience. The applause it received goes not only for me but for the whole team too, as they all showed outstanding determination and ambition at work despite the difficulties we faced, e.g. extremely dynamic and complex shooting conditions. It would have been impossible to make this film without my amazing crew," - says A. Matelis.

The premier at the WFF received positive response from the audience, as many viewers appreciated the fact that the director had the courage to

draw the backstage curtains of the enduring cycling races. It was the first time somebody had chosen to use the language of cinema to talk not about the winners who usually take all the credit, but rather about those who stay in the shadow. These "gregarious"/"domestique" opened up their hearts to the director and let him watch their daily routine - exhausting training and strenuous races where there's not even a chance for a personal victory, only the duty to overcome the harshest challenges in order to help your team's leader triumph.

"How did you manage to get so close to the heroes of your film?" was among the most popular questions at the first screening. A. Matelis admitted that gaining cyclists' trust was among the most difficult tasks for the whole crew. "Days and even weeks had to pass before the "gregarious" started to notice our persistence to capture the smell of sweat instead of the taste of victory. Very often we had to shoot in the most dangerous conditions and risk the safety of the crew. I believe this is what finally made the heroes fully trust our intentions", - claims the director.

"Wonderful Losers. A Different World" is one of the most complex and riskiest documentary projects in Europe - it's been 40 years since any film director was given the permission to shoot the race from the inside with his own crew. Once there was a green light, the Italian press had been extremely interested in the development of this project. "None of my awards or earlier films have earned as much attention in Italy as "Wonderful Losers. A Different World", - adds the author of the film with a smile.

"Arunas Matelis takes a risky move: he speaks not about the winners, but instead - the sweat-pouring sportsmen who remain in the shadow", - still in astonishment the Italian daily newsletter La Repubblica recently wrote.

"I was intrigued to understand those who cross the finishing line second though could be there first, those who choose to be someone else's sword-bearers. It's hard to imagine a bigger paradox - years after years the sportsmen undergo rigorous training and aim for constant improvement just for the sake of someone else's victory. Even before the actual shooting began I saw this phenomenon as a universal topic. A conscious sacrifice for another person. Honestly, it's not even important whom we are talking about - the cyclists who set aside their ambitions to win, somebody in a couple who gives up his/her career for another's welfare, a mother who stays at home to bring up her kids or children who sacrifice their lives to take care of their ill parents. At the end of the day, the criteria defining the winners in each situation become even more unclear", - says Matelis.

Up until Arūnas Matelis was allowed to observe the "Giro d'Italia" race from within, the last independent filmmaker to do so was Jorgen Leth, director of the legendary film "Stars and Watercarriers", released in 1973.

"Getting a permission to shoot the famous race after a forty-year gap was a huge challenge and an outstanding victory at he same time. It was only when the shooting began did we understand why "Giro d'Italia" takes place in a closed and carefully guarded terrain where nobody, except for the sportsmen, their teams and medical-car doctors medical were allowed to enter",- admits the director.

Arunas Matelis, a well-known documentary film director, has already been recognized in the international film community for his earlier films. Numerous significant prizes include the "Directors Guild of America" award for "Outstanding Directorial Achievement in Documentaries", making his "Before Flying Back to the Earth" the best documentary in the world in 2007. Interestingly, this was also his last film before the "Wonderful Losers. A Different World". Hoping for new, captivating stories from Arunas Matelis, the members of the Directors Guild of America were surprised and confused to receive nothing for a long time.

"It took me four years to start shooting a new film. "Before Flying Back to the Earth" was born out of my own painful personal experience. For years it felt as if I am not allowed to tell a new story unless it touches me personally as much as the previous one. Many times I would arrive at a location to shoot and find myself unable to even touch the camera for the fear that I won't be able to put all of myself into the new film. Gladly, the idea for "Wonderful Losers. A Different World" changed everything and brought back the desire to create again. Cycling is my childhood dream that never came true", - admits the director and delivers a story full of personal experience encrypted in the symbolic language of cinema.

The film "Wonderful Losers. A Different World" is the biggest European co-production so far. Initiated by Arunas Matelis' own production house "Studio Nominum" (Lithuania), the film was co-produced with an array of foreign countries, including Italy, Switzerland, Ireland, Northern Ireland, Latvia, Spain and Belgium.

The premier at the International Warsaw Film Festival was made possible thanks to the Lithuanian Film Center, Audiovisual authors and producers rights association "AVAKA", and the Embassy of the Republic of Lithuania to the Republic of Poland.

The national premier in Lithuania is expected to be held at the beginning of 2018.

A five-part historical drama Tokyo Trial that has been filmed in Lithuania was nominated for an Emmy...

This year's National Culture and Arts Prize has been awarded to actress Eglė Gabrėnaitė , writer...