March of the Living honours Holocaust victims in Paneriai, Lithuania

BNS
aA
Hundreds of people attended the traditional March of the Living on the Holocaust Memorial Day from a railway station to the memorial where 70,000 Jews were massacred during World War Two. 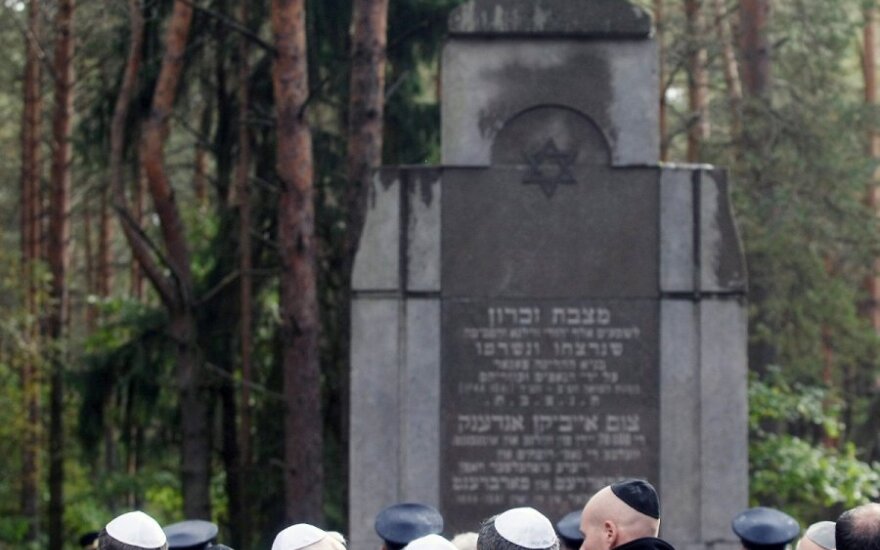 Under flying Lithuanian and Israeli flags, the rally included Jews living in Lithuania, people from Israel and a few hundred young people who formed a human David's Star in front of the Vilnius Town Hall before the march.

"If we're talking about Paneriai, it is a factory of death. The only word I can think of is horrible. I am here at this rally because I owe my family – I need to preserve their memory," Fania Brancovskaja, 93-year-old survivor of the Holocaust in Vilnius, told BNS.

Jewish national Joed Sorek of Germany expressed hope that the Holocaust would never be forgotten.

"We are here, we are marching, we won, we are singing, we remember what happened. We remember who did it. We are walking the forest where my grandmother lost all her family. On the first days of war, my grandfather and his son were taken here and shot. I'm here to make their stories alive," said Sorek, 34.

"This day very emotional for me because I have a family, which went through Holocaust. For me it means that Jewish people still live. We do not forget our parents and grandparents," said Eva Robotnick, 66, who came from Israel.

The 70,000 Jews killed in Paneriai were honoured in a memorial ceremony.

The Nazis, often assisted by their Lithuanian collaborators, massacred about 90 percent of the Lithuanian pre-war Jewish population of 200,000 during World War II. About 8,000 Jews were rescued and about the same number of Jews survived by fleeting to the Soviet Union.

The Israel-based Yad Vashem centre of Holocaust studies has recognized 877 Lithuanians as Righteous Among Nations for risking their lives to rescue Jews from the genocide.

About 3,000 Jews currently live in Lithuania.