BNS EN
aA
Participants of the March of the Living, a traditional event held in Vilnius to honor the victims of the Holocaust, underline the importance of remembering both the crimes of the executioners and the feats of the rescuers. 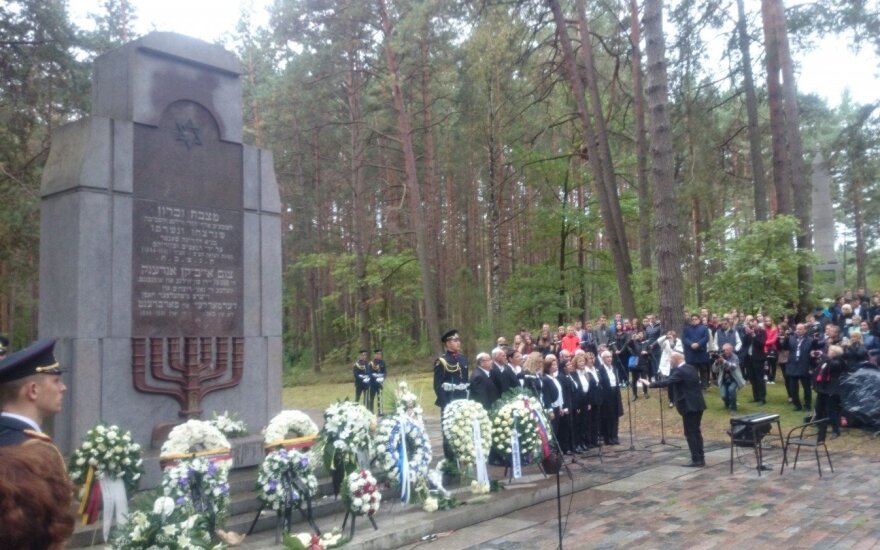 The march from the Paneriai railway station to the Paneriai Memorial, held for the 10th time on Wednesday, followed the route along which tens of thousands of Jews were marched to their deaths during the Nazi occupation.

"Today we both recognize and thank the individuals who, despite the risk not only to their own lives, but to the lives of their entire families, saved Jewish lives. We thank them and we bow our head," Amir Maimon, Israel's ambassador to Lithuania, said during the ceremony.

Andrew Baker, Director of International Jewish Affairs at the American Jewish Committee, said that responsibility for the Holocaust crimes fell on the Nazis and their collaborators, but he also pointed out the Soviet authorities' responsibility for not preserving the memory of the victims.

Mass graves across the former Soviet Union territory indicate that "Soviet citizens murdered by German fascists" were buried there, but give no indication that they were Jews murdered during the Holocaust, he noted.

Lithuanian Prime Minister Saulius Skvernelis, who took part in the march, also underscored the importance of remembering both those who had murdered Jews and remained indifferent to the Holocaust and those who had saved them, and of ensuring that such a "massive tragedy" is never repeated.

More than 90 percent of Lithuania's pre-war Jewish community of 220,000 people was killed during the Nazi rule of Lithuania.

The traditional March of the Living will take place at the Paneriai Memorial in Vilnius on Wednesday...

The massacre base established during World War II by the Nazi Germany in Paneriai just outside...

A conference on As Mass Murder Began: Identifying and Remembering the Killing Sites of Summer-Fall...

Simonas Gurevičius , a member of the board at Vilnius' Jewish Community, has initiated a petition...