BNS
aA
Around one thousand people attended the nationalist march in central Vilnius on Wednesday, an event that usually sparks controversy over chants "Lithuania for Lithuanians". 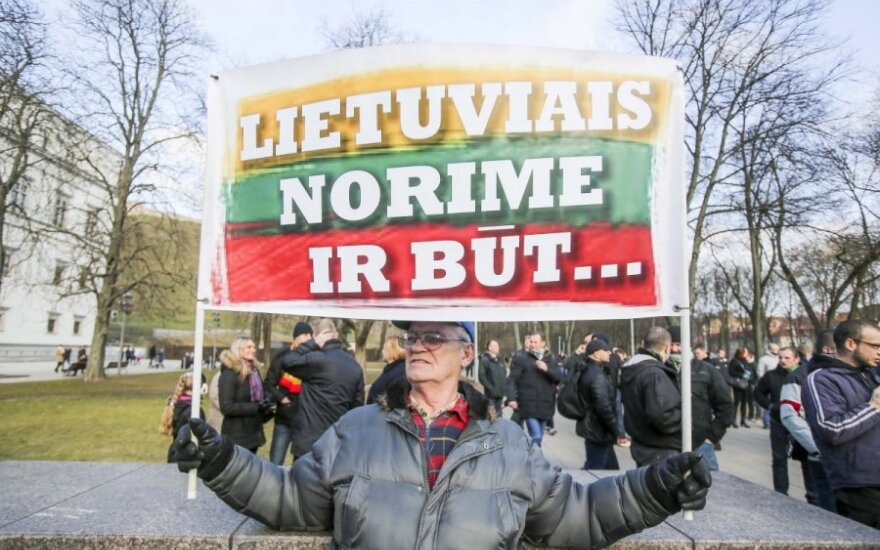 Carrying the flags of Lithuania, Latvia, Estonia and Ukraine, participants of this year's march also chanted "Lithuania" and "Lithuania for Lithuanians" and sang patriotic songs when marching through Gediminas Avenue.

Some people were also carrying banners expressing support for Ukraine alongside traditional banners saying "No to East and West, Lithuania is for Lithuania's Children".

"It’s a patriotic march. Regarding the chant 'Lithuania for Lithuania', everybody has their views and is free to express them. They are not directed against ethnic minorities," participant Povilas, 18, told BNS, holding a Lithuanian flag.

Rimantas Matulis, 73, one of the restorers of the Lithuanian Nationalist Union, said the chant "Lithuania for Lithuanians" was aimed against Russification and not other nations.

This year, the march was attended by considerably fewer people as compared to the noon march in Vilnius which involved over 4,000 people who stressed the unity of all citizens a did not chant nationalist chants.

A nationalist march in Vilnius is held every year on March 11, on the Day of the Restoration of Lithuania's Independence. Several thousands people would take part in such marches in previous years.

Thousands of people took part in a festive parade as Lithuania marked the 25th anniversary of its...

As Lithuania marks the 25th anniversary of its independence restoration on Wednesday, President Dalia...