BNS
aA
As Lithuania marks the 25th anniversary of its independence restoration on Wednesday, President Dalia Grybauskaitė called on Lithuanians to unite in the wake of new threats. 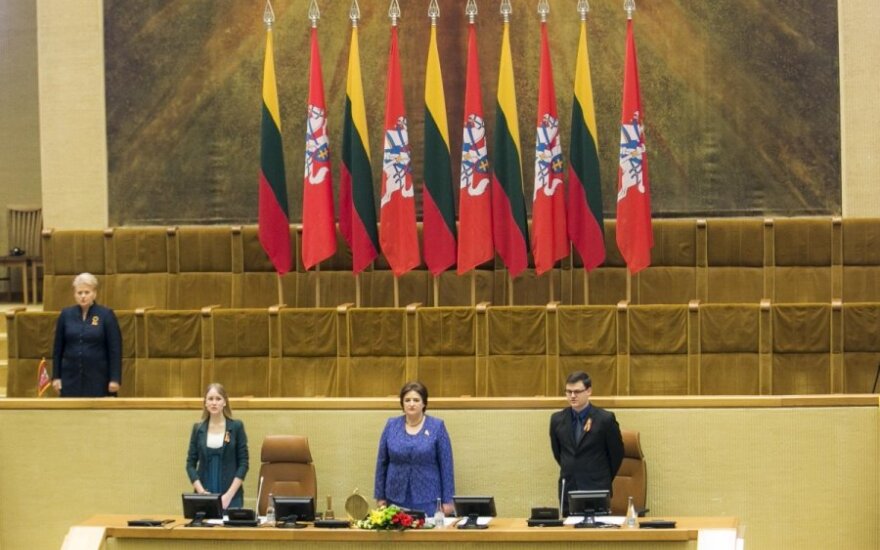 In her speech during the Seimas of Lithuania's solemn sitting, the head of state said that "the generation that gained freedom and defended it is an example to be followed by young people."

"The great power of unity of those years has become a legend. We need the same unity today, a quarter of a century later. When the rattling of arms is heard again from the same direction. When firearms are used to stifle the voice of freedom. When not only the outside forces, but those inside too try to divide, to belittle and to fade the light of freedom. We will be as strong as we are united," the Lithuanian president said.

Lithuania 's first post-independence leader Vytautas Landsbergis also spoke about the threat posed by "the empire", without directly mentioning Russia. He called on people to get prepared for defense instead of relying on "scared European friends."

"If the madmen's aggression is unstoppable and the empire is going back to its former colonies, our success story might became a story of temporary success that will be turned into ashes, and scared European friends will even advice not to put up resistance to the attacker as probably, they will say, there are more important things in the world then freedom and justice. But in the beginning and always, we are those who have something to say. We must get prepared for defending our grey-haired father, beloved grandmother and little sister," Landsbergis said.

Later in the day, the hoisting ceremony of the Baltic flags will take place outside the Seimas, followed by a parade to the Cathedral Square.

On the festive occasion, a round-table discussion on the lessons of history and existing challenges will be held at Vilnius Town Hall, attended by politicians from the Baltic and Nordic countries, Poland, Ukraine and the United States.

Kaunas, Lithuania's second-largest city, is holding its traditional commemoration in the garden of the Vytautas the Great War Museum at noon. And in the afternoon, the residents of the western port of Klaipėda is invited to decorate the symbolic Columns of Gediminas with friendship bracelets woven by schoolchildren.

In the evening, festive concerts are taking place in the Cathedral Square in Vilnius, Kaunas' Žalgirio Arena and Klaipėda's Švyturio Arena.

On 11 March 1990, Lithuania's Supreme Council (later renamed the Reconstituent Seimas), lead by Vytautas Landsbergis, adopted the Act on the Re-establishment of the State of Lithuania, making Lithuania the first Soviet republic that split from Moscow. The move made a significant contribution to the collapse of the Soviet Union and the entire communist system.