EN.DELFI
The Lithuanian Agency for Science, Innovation and Technology (MITA) has announced that 4 students have been selected to participate in the international internship program at NASA Ames Research Center. Students have already left for NASA Ames, located in the USA, California, and on the first days of September started their autumn internship program together with other international students from more than 12 countries, a press release from the Lithuanian agency states. 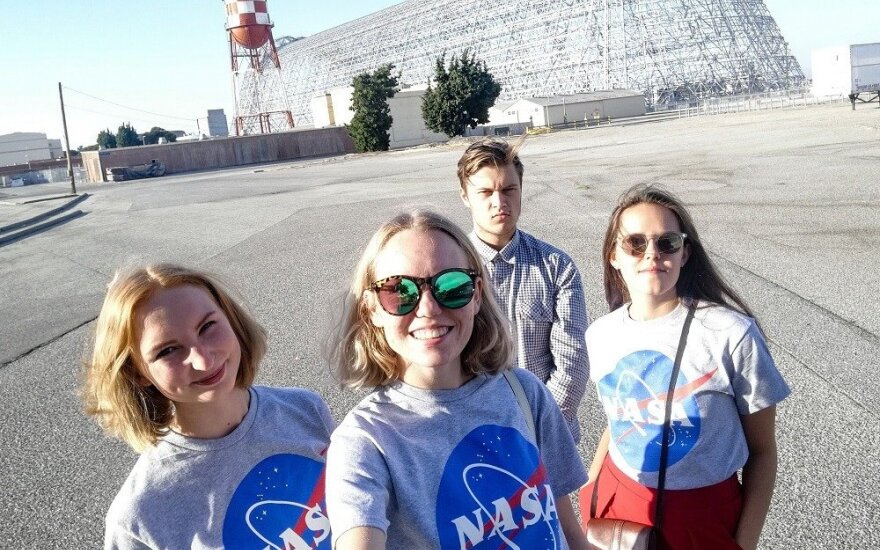 "We are very happy that the National Aeronautics and Space Administration has approved the list of 4 selected national candidates and has provided an opportunity for most talented Lithuanian students to gain experience in a prestigious internship program", said Kęstutis Šetkus, director of MITA.

During the internship program at NASA Ames the students will have an opportunity to work with various projects.

J.Žvirblytė will work closely with NASA scientists and engineers to culture mouse embryonic stem cells and model gravity. If conducted successfully, this research may enable the development of novel tissue regenerative approaches to tissue degeneration such as that induced by spaceflight in microgravity.

J.Kravcenko will join the team that supports the development and testing of the Medical Data Architecture in support of the Human Research Programme.

V.J.Labanauskas will work on aeromechanical research activities and contribute to the Aeromechanics Office's rotorcraft research, which has both theoretical and experimental components.

G.Plečkaitytė will be involved in studying a tremendous potential of nanomaterials, such as carbon nanotubes, graphene and a variety of inorganic nanowires, for future nanoelectronics, nanosensors and related devices.

According to MITA internship program coordinator Sigutė Stankevičiūtė, Lithuania was not able to take part in the summer internship program. The reason behind that was an unexpected halt in the work of the US authorities, including NASA. After a short delay, preparations for the autumn traineeship program continued, opening the gates for students from Lithuania.

The estimated duration of internship program at NASA Ames Research Center is 16 weeks (until 14 December 2018). Selected trainees from all around the world will work on specific research projects and will have the opportunity to contribute to the most advanced research and development of space technology.

Student internships are funded by Agency for Science, Innovation and Technology Agency (MITA) and the Ministry of Education and Science.

About Lithuanian cooperation with NASA

In 2014 The Agency for Science, Innovation and Technology (MITA) and NASA signed a bilateral cooperation agreement on International Internship Program (NASA I²).

The agreement was signed during a visit of the Government of the Republic of Lithuania to the United States. Only 12 countries in the world (Australia, Brazil, Israel, Jordan, Mexico, Lithuania, Portugal, South Africa, South Korea, Sweden, Trinidad and Tobago and the United Arab Emirates) and European Space Agency have agreements with NASA, which opens possibilities for students to participate in summer and autumn internships.

The European Organization for Nuclear Research ( CERN ) invites students from Lithuania for...

Webpage of one of the most prestigious scientific journals in the world, Nature, recently published an...

For the second time in a row, Baltic Summer University (BSU), a project organized by Vytautas...

Top Lithuanian students to intern in China at Huawei

Contemporary technological devices can be managed not only by pressing keys on a keyboard or moving a...