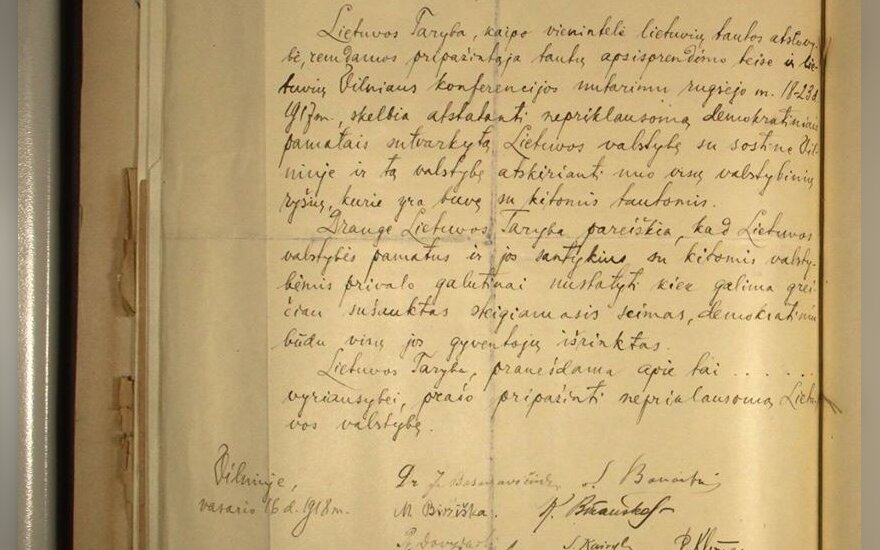 "The Vytautas Magnus University has been long working on the idea of inviting higher education institutions of these countries and apply for an analysis, which would be a major and a very interesting challenge for me as a researcher," Mažylis told a news conference at the Lithuanian parliament on Monday.

The professor noted that the independence declarations had not yet been examined.

"I am a bit astonished that there have been no systematic research that would analyze the independence declarations in a consistent manner, their content and the concept of sovereignty, where things are shared and separate," said Mažylis.

Related articles
Vytautas Sinica. Do we still need the state of Lithuania?
Centenary across the Atlantic on the West Coast with Prof Mažylis

Conservative MP Emanuelis Zingeris says he would propose synchronizing the political statements of all countries, which would examine "the crucial 1917-1918 contribution to the creation of a free world."

Lithuania this year marks 100 years since the declaration of its independence – on Feb. 16 of 1918, the Council of Lithuania announced restoration of the independent statehood.

Mažylis found the resolution on restoration of statehood in Germany's diplomatic archives in March of 2017.

Under a bilateral agreement, the act is currently on display in Vilnius after being handed over to Lithuania for up to five years. The agreement stipulates that the document could be displayed in Kaunas in 2022 when the Lithuanian second city holds the status as the European capital of culture.

February 16 is a national holiday in Lithuania in commemoration of the signing of the Act of...

A font developed by the original of the February 16 1918 Independence Act was presented at a solemn...

A solemn ceremony was held in the House of Signatories in Old Town Vilnius on Sunday to inaugurate the...