Lithuanian president: it's our duty to invest in teachers

BNS
aA
Lithuania must invest in the teaching profession as the nation's freedom and future depends on teachers, President Dalia Grybauskaitė said on Thursday. 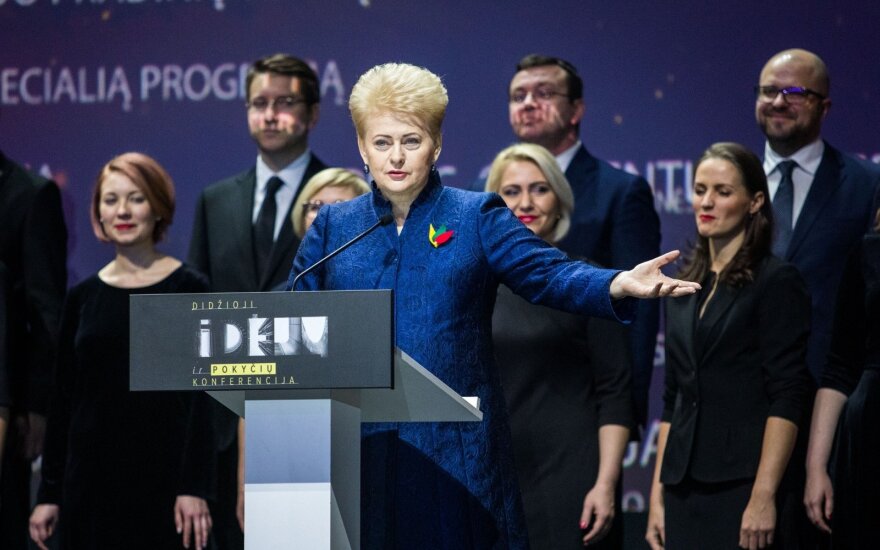 Making the teaching profession prestigious by 2025 is one of the three top "ideas for Lithuania" that were unveiled on Thursday as part of a national initiative that was led by the media and the state's leaders and lasted for almost half a year.

The other two top ideas are to legalize dual citizenship and to ensure support for young families in purchasing housing and to cut bureaucratic red tape by digitizing public services.

The top ideas were selected from 1,500 entries by experts and the general public.

"Our future depends on how we -- politicians, society and our state -- invest in, regard and treat teachers. The position the teacher has in our society is like a litmus test. Do we understand that education is key to our state's survival?," Grybauskaitė said during a special Idea for Lithuania conference.

"Therefore, investing in teachers and education is not only our duty, but it is also our future," she said.

The other winning ideas were unveiled by Viktoras Pranckietis, the speaker of the Seimas, and Prime Minister Saulius Skvernelis.

Pranckietis noted that the idea of dual citizenship was reflected in Georg Sauerwein's poem "As Lithuanians We Were Born", written almost a century and a half ago and still popular in Lithuania as a national hymn.

He added that the nation will have an opportunity to decide whether or not to legalize dual citizenship in a referendum.

Skvernelis underlined that both support for young families and cutting red tape are of equal importance. The two ideas received received equal support and are listed as one.

According to him, "red tape kills the state" and the goal of digitizing all processes "demonstrates the state's ability to change (and) the modernization of the state".

Ideas could be proposed by anyone who wanted to. The three top ideas were chosen based on how many online votes they received, how frequently they were read and how many people proposed the same or very similar ideas, as well as on the results of surveys of professionals and the general public.

The confidence of the Lithuanian population in the country's education system is currently at the...

Lawyers of the Lithuanian parliament have criticized the government proposal to provide support to...

Lithuania is shifting to a new pay system of teachers as of the upcoming September.