BNS, the Lithuania Tribune
aA
Lithuanian police announced that a man, who may have called to inform that an explosion had been placed on Ryanair jet flying from Kaunas to Luton (UK) was arrested. The suspect, born in 1993 was arrested in Kaunas district at 4.40pm Lithuanian time. 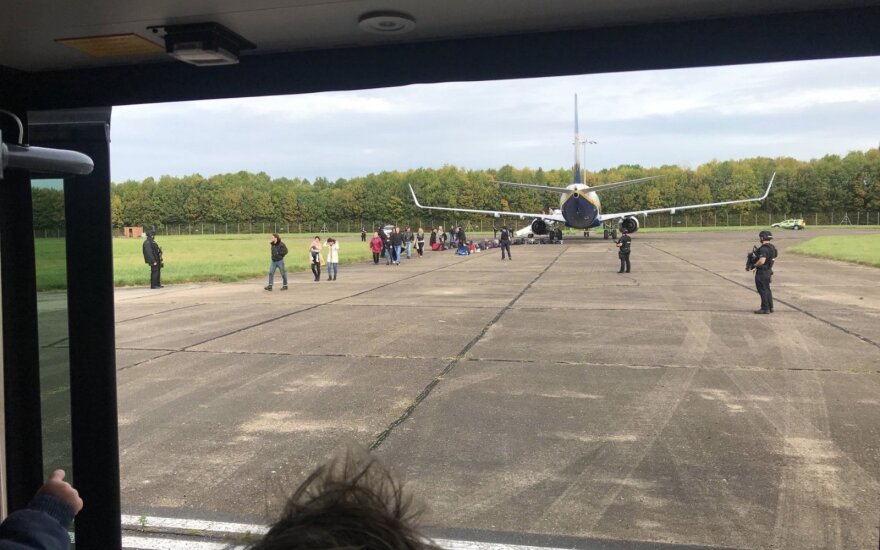 Great Britain's fighter-jets were scrambled on Wednesday to accompany Ryanair passenger airliner en route from Kaunas to London following a hoax call received in Lithuania about an explosive aboard the plane, Lithuanian police said.

The airliner was directed from Luton to Stansted airport for security reasons.

"A call was received on the emergency number at 6:21 a.m. A male caller said that there was a bomb on the airplane flying from Kaunas to Luton at 7 a.m. An investigation was opened and authorities are working to establish the caller. As far as I know, the airliner took off behind schedule," Odeta Vaitkevičienė, spokeswoman for the Kaunas county police, told BNS.

In her words, the Kaunas airport was notified about the call and take-off was allowed after establishing that the call had been a hoax.

Lietuvos Oro Uostai (Lithuanian Airports), the company that op jeterates Lithuania's three commercial airports in Vilnius, Kaunas and Palanga, said it had received information from the Kaunas police on Wednesday morning about an airliner with an explosive aboard about to land in the airport, although no arrivals were scheduled at the time. The only people in the Kaunas terminal were the passengers for the 7:30 a.m. Ryanair flight from Kaunas to Luton. The police and airport staff along with the Ryanair crew decided to check the airliner.

"As no suspicious items were discovered at the terminal or the airliner, we decided to allow the airplane to conduct the flight from Kaunas to the Luton airport in London. The airliner took off safely at 8:06 a.m.," Lietuvos Oro Uostai said in a press release.

The police said an investigation was in progress.

British media reported that the passenger airliner had been accompanied by British fighter-jets Typhoon to the London Stansted airport.

RAF Typhoon jets have intercepted a passenger flight and diverted it to Stansted Airport, BBC news...

A man was arrested after police found two kilograms of cocaine in his car during a check in Vilnius on...