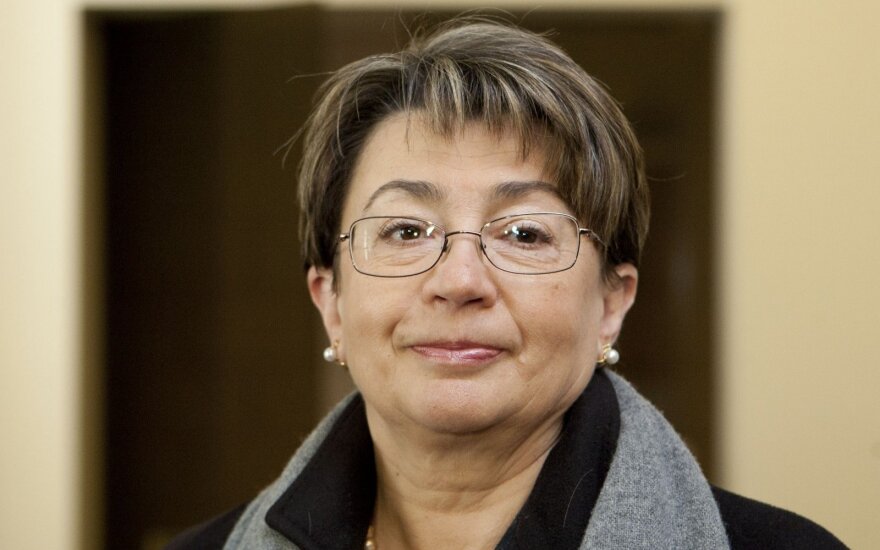 Faina Kukliansky, leader of the community, told several hundred people who gathered in Paneriai, a suburb of Vilnius, for a traditional march on Holocaust Remembrance Day, that Lithuanian officials "need history lessons".

Participants of the March of the Living carried Lithuanian and Israeli flags as they marched from the Paneriai railway station to the Paneriai Memorial, where a memorial ceremony was held.

The march follows the route that prisoners from the Vilnius Ghetto were forced to take to the Paneriai forest where they were massacred.

Speaking at the ceremony, Kukliansky criticized the Lithuanian Migration Department which has been rejecting applications for restoration of citizenship rights from Jews and their descendants who live in Israel and South Africa.

"We (Jews) never gave them (Lithuanian passports) away voluntarily, but the officials now tell us that perhaps there was no need to flee Lithuania, that everything was fine and perhaps you wouldn't have died, no matter that only 5% of those who stayed survived," she said.

The Lithuanian Citizenship Law allows granting citizenship to people who left Lithuania before March 11, 1990, and acquired citizenship of another country, as swell as their descendants. About 1,000 Jews living in South Africa have taken advantage of this legal provision. However, the process of restoring citizenship rights was suspended for some of the people in mid-2015.

In rejecting applications for citizenship, migration specialists refer to case law that says that citizenship can be restored only to persons who left Lithuania before restoration of independence in 1990 for political reasons, resistance to occupation regimes or persecution by the regime. Lithuanian officials underline that Jews were not persecuted in the independent Lithuania of the interwar years.

Among the participants of the March of the Living was Nachum Purman, a 67-year-old businessman from Israel, who introduced himself as a second-generation Litvak. Part of his family now lives in Siauliai.

"Our mission is to transfer the statement to our children - remember and never forget. I am doing this by myself, as well as a previous generation did it for me," he said.

The Nazis, often assisted by Lithuanian collaborators, massacred over 90% of Lithuania's pre-war Jewish population of 200,000 during World War Two. Some 70,000 of them were killed in Paneriai.

About 8,000 Lithuanian Jews were rescued and about the same number of Jews survived by fleeing to the Soviet Union.

The Israel-based Yad Vashem centre of Holocaust studies has recognized more than 800 Lithuanians as Righteous Among the Nations for risking their lives to rescue Jews from the genocide.

Some 3,000 Jews currently live in Lithuania, according to the latest census from 2011.

March of the Living to honour victims of Holocaust in Lithuania

On Thursday afternoon, Vilnius' 8th annual March of the Living will proceed from the Paneriai train...