BNS
aA
Vilnius' authorities have not allowed Lithuanian nationalists to march with torches in their hands along the capital's Old Town on Friday, when the nation will celebrate the centennial of restored statehood. 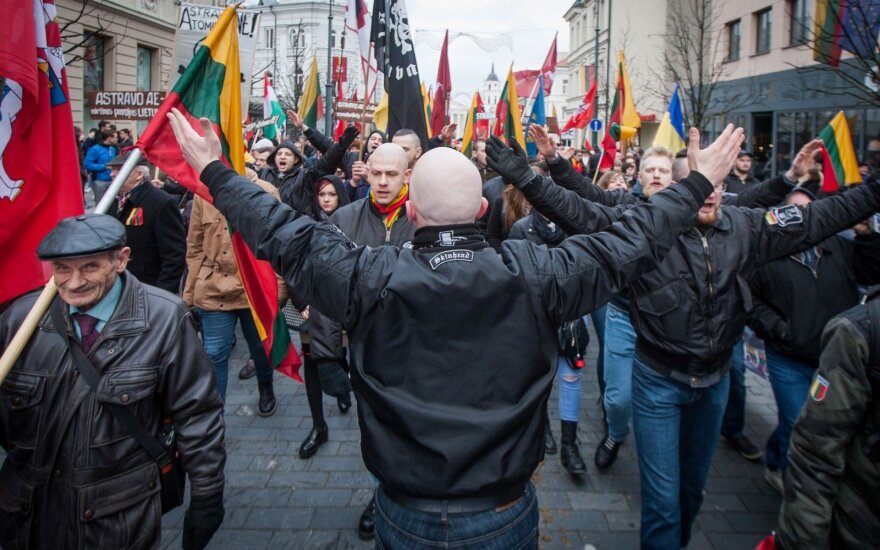 A municipal commission refused to sanction the nationalist march, saying that it would interfere with official celebrations planned in downtown Vilnius.

However, Sakalas Gorodeckis, head of the Nationalist Union, described it as an attempt to prevent the march from taking place and says that people can gather without permission from the authorities.

According to the Nationalist Union's advertisement on Facebook, the march was planned to start at the Gate of Dawn at 6 p.m. on Friday and proceed along the Old Town up to the capital's central Cathedral Square, where an official concert is scheduled for the night.

"Events of national and municipal importance are scheduled for the time specified in the application," Gintaras Leperskas, a Vilnius municipal official, said in a comment sent to BNS.

"Therefore, the Event Coordination Commission decided not to allow organizing the event (march) in the location specified in the application and told (the organizers) that the event could take place in another location in Vilnius where it would not interrupt the Restoration of Statehood Day events," he said.

The local authority confirmed that it had received a new application from the organizers of the march. The Event Coordination Commission is to consider it on Wednesday, two days before Feb. 16.

Gorodeckis says that he asked for permission to hold the march on the same route, from the Gate of Dawn to Cathedral Square.

Previous marches organized by nationalist youth organizations on Feb. 16 and Mar. 11, the Day of Restoration of Lithuania's Independence, were criticized for their nationalist slogans and banners.

Police have launched a pre-trial investigation to find out who painted Soviet and Nazi symbols on a...