BNS
aA
Nijolė Sadūnaitė lives in a convent outside Vilnius and doesn't hear news very often, as she does not use the Internet, does not watch television and hardly listens to the radio, therefore, she only heard about the Lithuanian parliament's decision to award her with the Freedom Prize many hours after the vote. 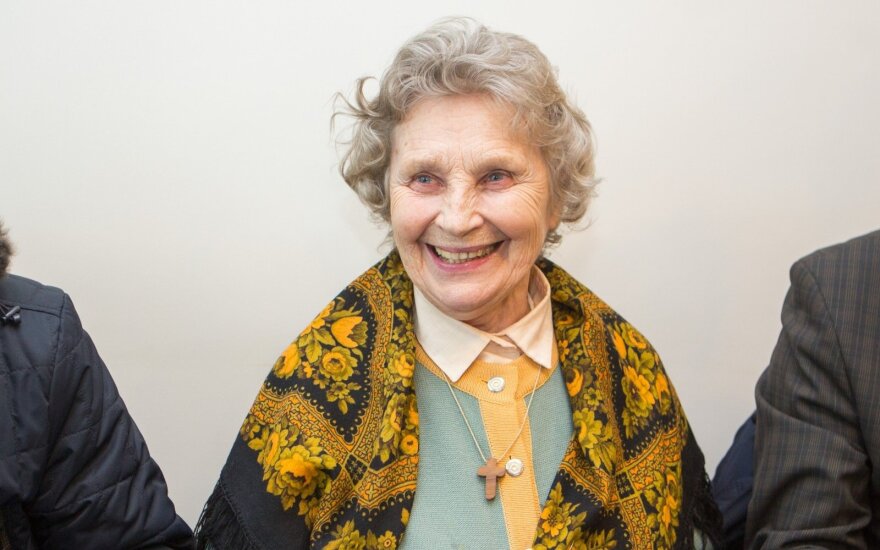 Sadūnaitė, the distributor of the Chronicles of the Lithuanian Catholic Church published during the Soviet rule, shrugs in doubt whether she indeed deserved the award.

"I am one hundred percent sure that dear God could not find a less educated and a weaker person in Lithuania, therefore, game me strength and assigned me to the task," Sadūnaitė told BNS.

She said that earlier winners of the Freedom Prize, including publisher of the Chronicles of the Lithuanian Catholic Church Archbishop Sigitas Tamkevičius and Russian dissident and human rights activist Sergey Kovalev, had deserved the prize much more.

Nevertheless, the nun expressed astonishment over the fact that the prize had not been awarded to any of the guerrilla who fought against the Soviet rule. Sadūnaitė said she would give her prize to one of the veterans of the freedom efforts, Jonas Kadžionis.

"I bow before him and the rest of the guerrilla. If it wasn't for them, we would not exist. Lithuania grew on their blood, their suffering and their dedication," she told BNS.

Fates of guerrilla fighters were among the main reasons behind Sadūnaitė's decision to go underground. Born in Kaunas a year before the start of World War II, Sadūnaitė was raised during the era when many Lithuanians went to the forests in an effort to resist the Soviet occupation.

In an effort to avoid deportation to Siberia, the religious family of Sadūnaitė settled in Anykščiai, central Lithuania, in 1945. In her childhood, she often saw bodies of guerrillas piled up on the side of the road before they were taken to central squares to deter other locals from joining the resistance efforts.

"As I put it, my parents introduced me to religion, and I saw everything else myself. It was then that I understood what occupation is. I did not need any propaganda," said Sadūnaitė.

After graduating school, she joined the convent and was targeted by the Soviet security in 1970 after she found a lawyer for priest Antanas Šeškevičius who was on trial for religious teaching of children.

A year later, Sadūnaitė secretly delivered a memorandum on restrictions of free consciousness in Lithuania to foreign diplomats in Moscow, and in 1974 she started copying and distributing the Chronicles of the Lithuanian Catholic Church.

She played a crucial role in transporting the publication abroad. After changing her appearances, she often travelled to Moscow to hand the chronicles to persons close to the United States Embassy.

Sadūnaitė said her goal was to tell the international community about the human rights violations of Catholics and people of other religions.

"I always supported the truth and love of people. What can be more beautiful than loving people and the truth? This what the Chronicles of the Lithuanian Catholic Church was all about. All occupants viewed people, honesty and mind as their biggest enemies," she added.

Upon return to Lithuania, Sadūnaitė continued publishing and distributing the Chronicles of the Lithuanian Catholic Church, always in hiding but still often arrested and questioned.

On Aug. 23 of 1987, Sadūnaitė along with Antanas Terleckas, Vytautas Bogušis and Petras Cidzikas organized a protest rally at the monument to Adomas Mickevičius to commemorate the Ribbentrop-Molotov pact. After years of suppression, participants of the rally sang the Lithuanian national anthem for the first time in public.

The agile and optimistic nun currently serves in a convent, saying that Lithuania's independence was the main objective of her life.

"I always used to tell the brothers from the KGB (Russian security police): If Lithuania was held by Catholics and they persecuted atheists, I would go to prison for you. No one should persecute people for their beliefs," she added.

Ahead of the 28-year anniversary of independence next year, Sadūnaitė's main concerns include incomplete lustration, social exclusion and emigration.

The Lithuanian parliament decided on Thursday to award the Freedom Prize to Nijolė Sadūnaitė , a...