BNS
aA
Lithuania's February 16 1918 Independence Act to be handed over by Germany will be exhibited in the Signatory House starting next year, the President's Office said on Tuesday. 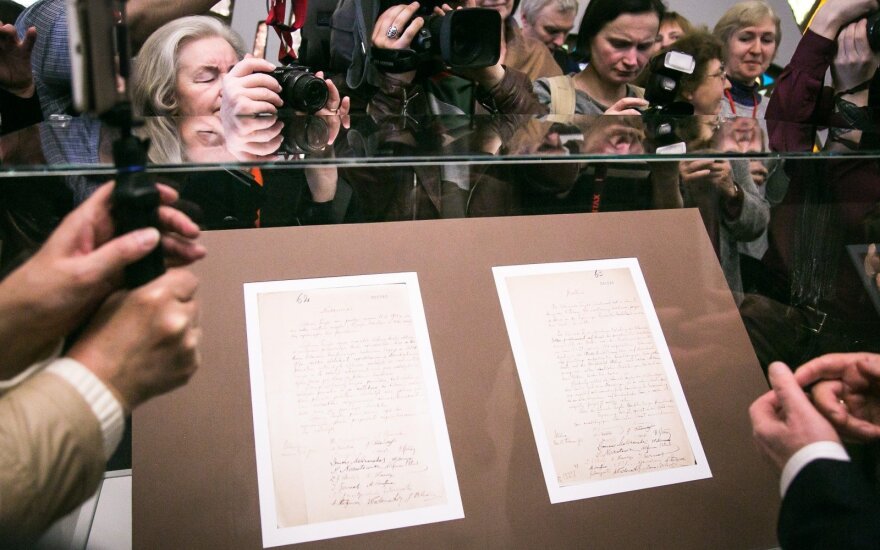 "As early as in January of next year, the Signatory House will launch an exhibition featuring the act," Nerijus Aleksiejunas, foreign policy adviser to Lithuania's president, told BNS.

In his words, the foreign ministers of Lithuania and Germany will Friday sign an agreement on the temporary storage of the document discovered in the diplomatic archives of Berlin.

The content of the document to be signed in the German capital is withheld for confidentiality reasons. Diplomatic sources have told BNS that the storage of the document would have to be extended annually, however, the maximum time-frame would not exceed five years.

The document should be endorsed by Lithuania's government on Wednesday.

"This indeed was not an easy process and it was not clear whether this would be possible. This reflects the political line that the relations with Germany are truly very good," said Aleksiej unas.

"The president has discussed the issue with both the German president and the country's chancellor on a number of occasions. The Ministry of Foreign Affairs, the minister and his team also worked hard on the matter," he added.

Liudas Mazylis, a professor at Vytautas Magnus University, found the Council of Lithuania's resolution proclaiming the restoration of an independent state of Lithuania with Vilnius as its capital, written by hand in Lithuanian and German and with 20 signatures on it, in the German Foreign Ministry's archive in late March.

Presided by Jonas Basanavicius, the Council of Lithuania signed the Act of Independence in Vilnius on Feb. 16, 1918. Historians believe that several original copies of the document were signed on that day, but the whereabouts of the others are unknown.

Germany plans to hand the original copy of Lithuania's 1918 Act of Independence recently found in...

Officers of the Public Safety Service will guard the 1918 Independence Act to be handed over to...

Germany's representatives officially handed over the February 16 of 1918 Independence Act on...

A solemn ceremony was held in the House of Signatories in Old Town Vilnius on Sunday to inaugurate the...