(1)
BNS
aA
As Lithuania marks 70 years since the start of the guerilla war this summer, new initiatives are emerging in the country to pay tribute to the legacy of the "brothers of the forest", as anti-Soviet partisans were known, which has inspired many Lithuanians from artists to soldiers. 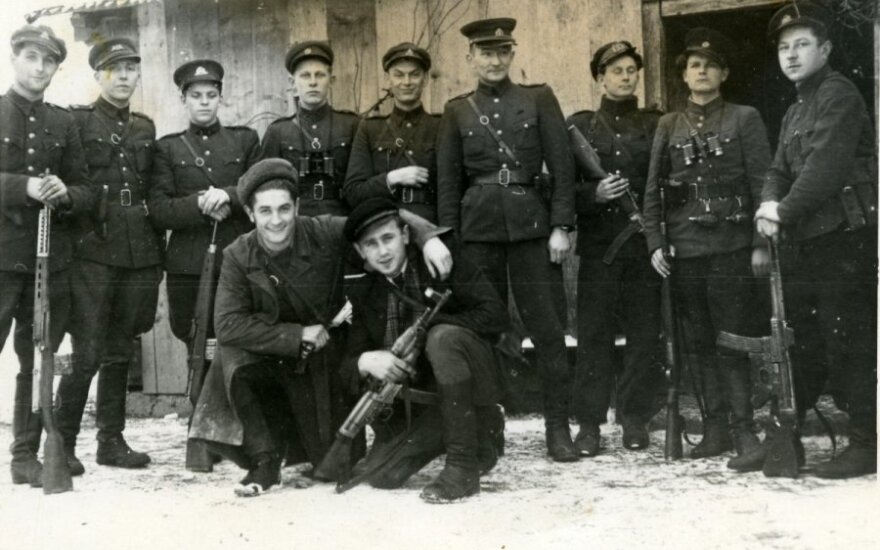 "We thank the brothers of the forest for the opportunity to live in Lithuania, to speak the Lithuanian language without fear, be able to travel wherever we want and to choose whom to vote for," famous musicians, politicians, public figures and members of the Lithuanian Riflemen's Union said in tribute to the 1944-1953 armed resistance. They published pictures of forest-green wristbands on social networks.

Authors of the initiative, distributors of the new film The Invisible Front, which tells the story about "the war after war", maintain they have already handed out thousands of the bands, which are popular among Lithuanians across the globe from Japan to the United States.

Driven to forest by Soviet terror

The guerrillas who have survived the post-war struggles and lived to see Lithuania's independence say it was the belief in ultimate victory of the truth that forced them to go to the forests seven decades ago and to fight against the Soviet rule. 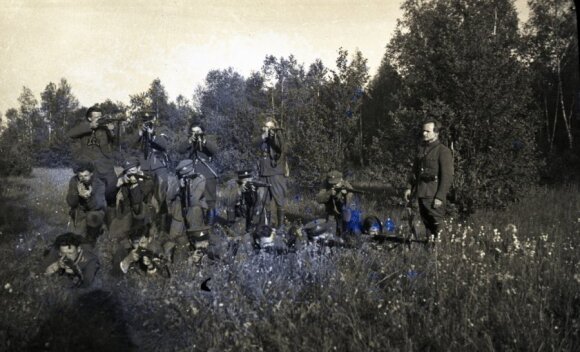 The man who spent five years in the forests in the counties of Panevėžys and Rokiškis said that fighting against the invaders was a better option than suffering Soviet torturing or deportation to Siberia.

"When we were in a bunker, we were sure that we will have enough time to take our lives. Young people detonated themselves or shot themselves because they knew how brutal interrogations would be, you could fail and betray other people. Nobody had returned from Siberia back then, Siberia was feared more than death," said Kadžionis who was a member of the Tigro troop of the Butigeidžio company of the Šarūno team of the Algimanto county.

After pushing out the Nazis in the summer of 1944, the Soviet troops occupied the Baltic states for the second time and immediately reinstated a brutal regime, which featured Soviet repressions, terror and mobilization to the Soviet army. All this fuelled resistance among Lithuanians.

"The administration left us with no other way to live than to resist," Darius Juodis, a historian at the Lithuanian Genocide and Resistance Research Centre, told BNS.

In 1944-1946, large guerilla units of up to 100 fighters were formed. About 30,000 men controlled the entire territory of Lithuania, with the exception of the cities. They would fight with the Soviet People's Commissariat for Internal Affairs (NKVD), hinder elections of the invader administration, fire shots at voting stations and fight against forced creation of collective farms.

Guerilla court martials tried and executed perpetrators of deportations, Soviet officials and spies. After the Soviets blocked Lithuania from the free world of information, guerilla counties set up press and information divisions that published more than 80 periodicals over the course of the guerilla war.

Lithuanian resistance efforts were the strongest among the three Baltic states, as the country still had confidence that the West would come to assistance. Lithuanians believed that the Communist rule would not last long, and the US and Great Britain would keep the promises of the Atlantic Charter to return the independence to countries that lost it during the war.

"When setting up their units, guerillas were preparing for a mass uprising in the wake of interference of Western countries and successful restoration of Lithuania's sovereignty," Edita Jankauskienė, another expert at the centre, told BNS.

After losing about 10,000 men in the fighting, guerillas formed smaller units in the second phase in 1946-1948, built bunkers and adopted the usual guerilla war tactics. They managed to develop centralized structures, but these were soon destroyed. On 16 February 1949, the guerillas published a declaration on the restoration of Lithuania's statehood and democratic governance principles. 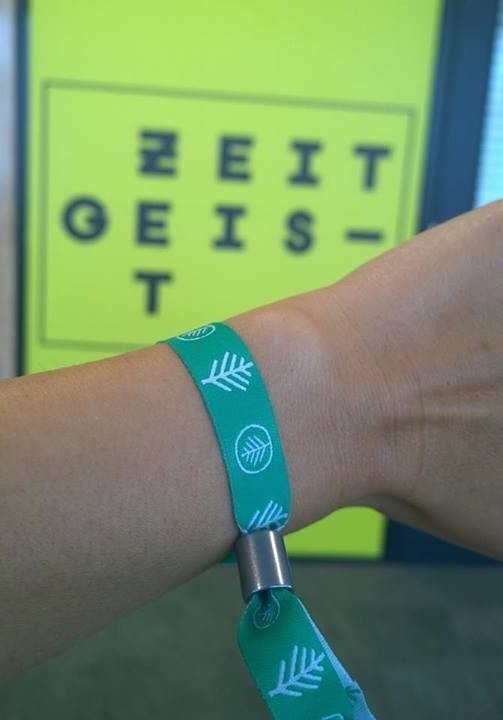 Abundant NKVD forces were deployed in Lithuania to fight the guerillas, along with destruction battalions. The repressive structures deported families of guerillas to Siberia, discarding half-naked bodies of killed guerillas on central streets in small towns.

The organized armed efforts ended in the spring of 1953.

"The courage, self-sacrifice and lives of freedom fighters showed that Lithuania's incorporation in the Soviet Union in the summer of 1940 was against the nation's will, furthermore, it compensated for the idleness of the Lithuanian government and Armed Forces," reads a brief History of Lithuania published in 2012.

After Lithuania regained independence, efforts were made to pay proper tribute to the memory of the guerilla struggle. Eight monuments to celebrate guerilla counties have been erected since 1995, in addition to over 300 memorial signs. The War Academy in Vilnius and a gymnasium in Raseiniai, a city in western Lithuania, have been named after guerilla leader General Jonas Žemaitis. Gymnasiums in Garliava and Alytus have names of guerillas Juozas Lukša–Daumantas and Adolfas Ramanauskas–Vanagas.

Former guerilla Albinas Kentra established the Society of the Brothers of the Forest and founded an archive on Labdarių Street in Vilnius, aiming to transform the place into a point of dissemination of information.

In 2010, a music band Skylė published a theme album Broliai (Brothers), dedicated to the participants of freedom fights. "It is an example of strength and value-based attitude, which comes merely from a few generations back," the band leader Rokas Radzevičius said.

In addition to generous memories, the topic of guerilla war can also be found in literature. A few years ago, an English-language book Underground was published by Lithuanian-Canadian author Antanas Šileika.

Darius Juodis says heightened interest in armed resistance is also observed among the young generation: "Trips are held on guerilla paths, we cannot say we're short of people. It is not the older generation that is participating, it is the young people because they have to cover between 10 and 20 kilometres."

Heroic deeds of the brothers of the forest have played a key part in the development of the Lithuanian Army's Special Operations Forces that have been praised by NATO Allies.

"Psychological training of soldiers of the Special Operations Forces is based on the history of Lithuania's post-war guerrillas, which reflects the readiness and determination to fight till the end and not to give up under any circumstances," Lithuania's former Chief of Defence Lieutenant General Arvydas Pocius has said in an interview to the magazine Karys (Soldier).

"What helped us a lot was the memories of the guerrillas and the meetings of our special operators with the survivors of the 'war after war'. The conversations by a bonfire facilitated what was the key takeover of values and understanding what fighting to the last drop of blood meant under occupation," said the general.

The propaganda spread by the Soviet administration by biased selection and frequent forgery of facts aimed to discredit the participants of the resistance efforts, portraying them as Nazi collaborators, sadistic bandits or "remains of the exploitative classes."

Historians say the war, just like any war, claimed large numbers of civilian lives, and a some guerrillas could have been involved in the killing of the Jews - but not many of them.

After two years of operations, a team of Lithuanian historians said in 2012 it established over 1,000 Lithuanians involved in the Jewish Holocaust during World War II. The investigation did not reveal any evidence of participation of any guerilla leaders in the massacre of Jews.

"There are no guerilla leaders on the list. There is absolutely no data of this type," Teresė Birutė Burauskaitė, director of the Lithuanian Genocide and Resistance Research Centre, then told BNS.

In her words, many of the persons on the list could not participate in the guerilla struggle, as many Holocaust perpetrators were convicted at the start of the second Soviet occupation. 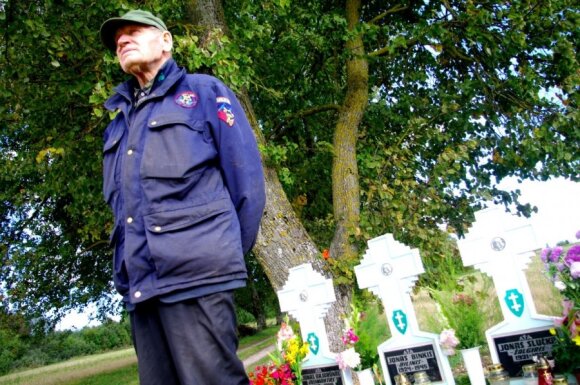 "Somewhere – in the Israeli press, the Wiesenthal Center – say that nearly all of the Lithuanian guerrillas were involved. Meanwhile, there were at least 50,000 guerilla, and the number of killers stood at 2,000," she added.

Kęstutis Girnius, the author of the 1987 monograph on Guerila Struggles in Lithuania, said that the Soviet administration aimed to defame everyone who opposed the Soviet rule, however, failed to achieve its goals by propaganda.

"The guerillas would not have continued, if they hadn't had very broad support. Entire villages supported guerillas," Girnius told BNS.

One of the guerillas, Kadžionis, says the support was the key motivation for "joining the do-or-die struggle."

"It was nation-wide resistance. People would donate their last piece of bread and told guerrillas everything, even their secrets," he concluded.

Through 1 August to 1 September, an exhibition dedicated to mass rallies of the Sąjūdis, a reform...

The fate of the controversial Soviet-era sculptures on the Green Bridge in the Lithuanian capital...

According to the results of a recent study of national archetypes of Lithuanians, we are kind-hearted,...