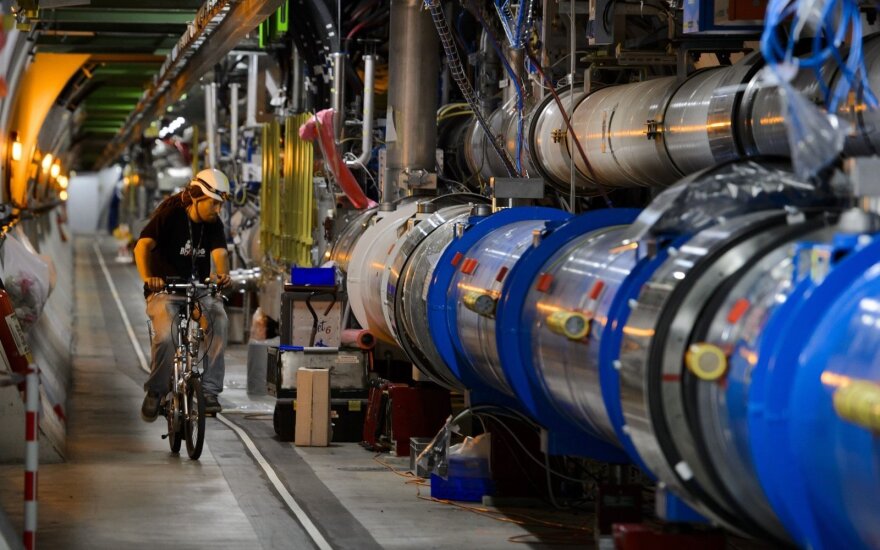 Lithuania has a cooperation potential with CERN - the world's largest particle physics laboratory, housing the Large Hadron Collider - not only in physics and computer science or education, but also in industry and medicine, VU says. Apart from Lithuanian scientists and researchers, a dozen of Lithuanian students participate annually in several CERN projects and bring back home new knowledge, scientific contacts, upgraded qualifications to Lithuania.

VU has a long-lasting cooperation agreement with CERN. VU research team and several companies were invited to cooperate in the development of the radiation monitoring device for the CERN proton irradiation facility and on other CERN projects. Earlier this year, VU Rector Artūras Žukauskas discussed possibilities with CERN representatives for further cooperation development between the institutions.

On 8 December, Permanent Representative of Lithuania to the United Nations Office and other international organizations in Geneva, Ambassador Rytis Paulauskas met with representatives of CERN, one of the world's largest and most respected centres for scientific research, and handed a letter from Prime Minister of Lithuania Algirdas Butkevičius, expressing Lithuania's aim of becoming an associate member of CERN, the Ministry of Foreign Affairs said.

In his letter, the prime minister of Lithuania underlined a long-time cooperation of Lithuania's academic community with CERN and cooperation with the Government of Lithuania, which had begun in 2004. According to Butkevicius, this was a prerequisite for seeking membership of CERN.

Currently, Lithuania successfully cooperates with CERN in the fields of particle physics, informatics, education and medicine.

During the meeting, President of the CERN Council, Prof. Agnieszka Zalewska welcomed Lithuania's aim of becoming an associate member of CERN. Prof. Rolf-Dieter Heuer, Director General of CERN, noted that after his visit to Lithuania and his meetings with heads of state there, he saw the country's aspiration to become an associate member.

CERN, the European Organization for Nuclear Research, is often referred to as the European Laboratory for Particle Physics. At CERN, physicists and engineers use the Large Hadron Collider and other scientific instruments to probe the fundamental structure of the universe and to develop the newest technology. The World Wide Web was invented at CERN.

On 27 October, Tuesday, President Dalia Grybauskaitė met with Director General of the European...

The team of the Department of Semiconductor Physics of Vilnius University (VU), headed by professor...

Lithuania on Monday formally became an associate member state of the European Organization for Nuclear...