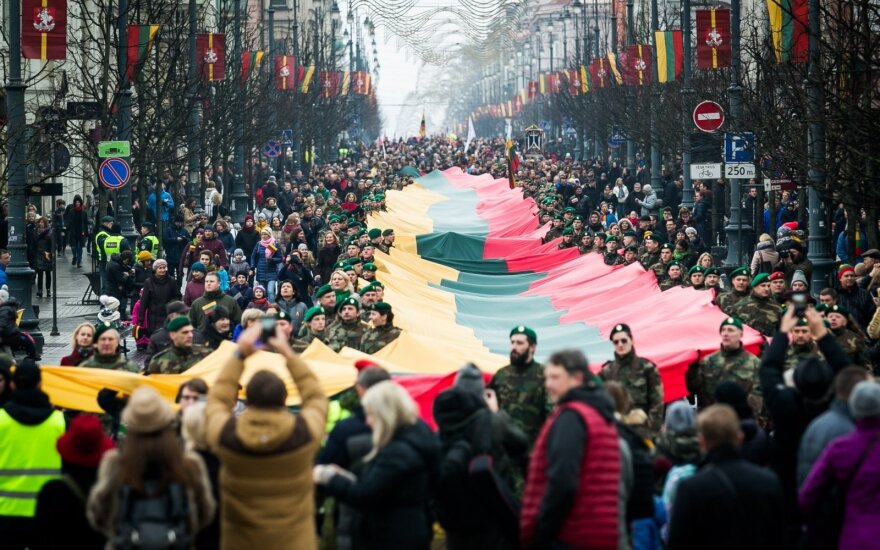 The March 'Our freedom' on March 11
© DELFI / Tomas Vinickas

The Seimas, the Lithuanian parliament, held its traditional solemn sitting in the morning to mark the historic separation from the Soviet Union.

In his speech during the sitting, Archbishop Sigitas Tamkevičius underlined that true freedom is about serving the people of Lithuania, rather than serving one's own needs in an irresponsible way.

Mečys Laurinkus, a signatory of the Act of March 11, 1990, underscored in his speech that Lithuania should become more self-reliant and that its history cannot be lost in a global world.

Several thousand people later in the day took part in a march emphasizing the unity of people living in the country that started after the traditional ceremony of hoisting the flags of the three Baltic states in Independence Square outside the parliament building in Vilnius.

Many participants of the march waved Lithuanian flags, had their faces decorated in the national colours and wore yellow-green-red scarves. The crowd also carried the flags of Poland, Ukraine and other countries.

"Love to the Motherland is our most powerful weapon that protects Lithuania forever," Viktoras Pranckietis, the speaker of the Seimas, told the marchers.

"Let's cherish the most important moments of Lithuania's history and be proud of them," he said.

Alius Lenkutis, a 72-year-old participant of the march, said that it brought back the memories of the days when Lithuania regained its independence after almost 50 years of Soviet occupation.

"Every year I want to return to these memories and to refresh them. And to show to the young generation," said the man, who took part in the march together with his young grandson.

Lidija, a 19-year-old schoolgirl, said it was not her first March the 11th parade.

"It's the Day of Freedom. I want to mark it somehow differently, rather than sitting in front of my TV," said the girl, who did not give her last name.

Around 500 people a few hours later participated in another march through Vilnius, which was organized by nationalists.

The march was led by a group of young people holding banners that read "We Are for Lithuania -- Great Again" and "I'm Proud to be Lithuanian".

The crowd chanted "Lithuania for Lithuanians", the nationalists' traditional slogan that has drawn strong criticism from ethnic minorities, as they marched through Gedimino Avenue.

Several people walking alongside the marchers on the sidewalks replaced the word "Lithuanians" with "All".

Other slogans chanted by the marchers included "Lithuania!" or "Maintain and defend your Lithuanianness".

The Day of Restoration of Independence was also celebrated in other Lithuanian cities and towns.

In their messages of congratulation, President Dalia Grybauskaitė wished the nation to be worthy of their freedom and Prime Minister Saulius Skvernelis called on people to learn resolve and unity from those to whom the country is grateful for the Act of March 11.

Headed by Vytautas Landsbergis, the Supreme Council of Lithuania adopted the Act of the Re-Establishment of the State of Lithuania on Mar. 11, 1990, thus making Lithuania the first Soviet republic to separate from Moscow.

Lithuania is celebrating on Saturday, March 11 , the 27th anniversary of restoration of independence,...

Nijolė Sadūnaitė lives in a convent outside Vilnius and doesn't hear news very often, as she does...