Israeli culinary guru Gil Hovav’s new TV show Open Skies about Lithuania on Keshet 12 channel counted about a million viewers. The half-hour show featured a variety of Lithuanian dishes along with the most interesting stories from different corners of the country. This month, Lithuania has also been shown on four TV editions on Travel China Channel made by reputed China’s traveller Zhang Wei, each show reaching 20 million viewers. The nine-minute shows managed to capture the best of Lithuania, including amber cathing, Samogitian partying, basketball game at the Kaunas Žalgiris Arena, as well as stories about the Lithuanian rain, the old town churches of Vilnius, the miracle tile, Pažaislis, M. K. Čiurlionis’s oeuvre, the Cross Hill, etc., a State Department of Tourism press release states. 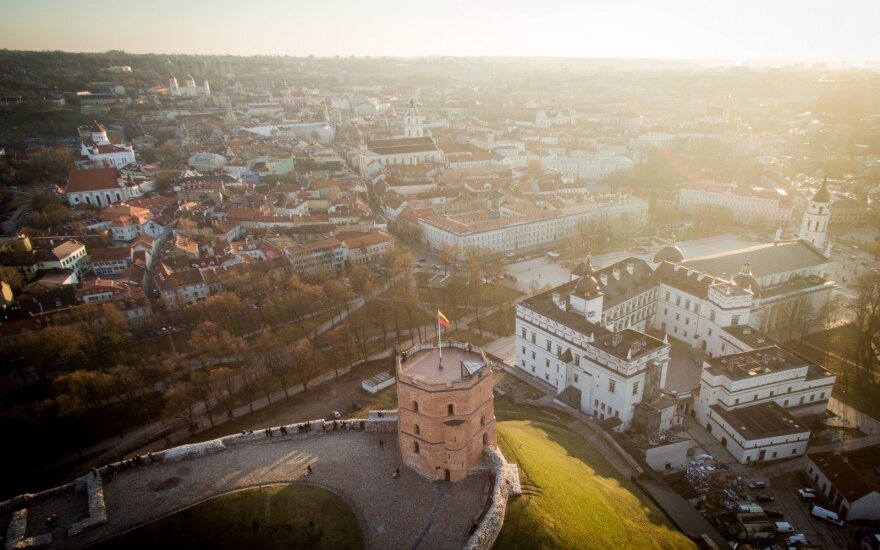 “This year, we have succeeded to invite and give a show-around to almost 80 foreign journalists, representing press and internet portals, radio and television, as well as photographers, creative teams from more than twenty priority incoming tourism markets; we also are in good contacts with bloggers. Through this, we aim to build a positive and attractive image of Lithuania as a tourism and holidays destination. We are very careful as regards the choice of the journalists, focusing particularly on the criterion of the audience reachability. But having the cream of the crop requires ardent and arduous efforts, as the competition among the countries is tough”, says Indrė Trakimaitė-Šeškuvienė, Acting Head of the State Department of Tourism.

“Guess what country I am in? Its language is among the oldest in Europe, it has the largest number in the world of air balloons per person, and the national dish is called cepelins”, says Gil Hovav, giving a hint to the audience at the very beginning of the Open Skies. Kaunas donuts, Lekėčiai branchy, honey cucumbers, cepelins, amber vodka, Vilnius air market highlights – rye bread, bacon, blueberries, and finally yet importantly – berry wine tasting while up in hot air balloon. Gil Hovav’s particular focus on the typical Lithuanian flavours raises no eyebrows, as he is known in Israel, in the first place, as a leading culinary traveller, restaurant expert, and author of culinary books.

“Last summer was the second time for Gil to visit Lithuania, which he did for the purpose of the Open Skies. At the beginning of the year, we invited him to the tourism exhibition Adventur, which has turned Gil into a true fan of Lithuania and its exceptional dessert, honey cucumber, and since then he has never refused to share his impressions at our planned tourism presentation events in Israel. One of the reasons why he agreed to cooperate with the Department of Tourism and to devote one of his Open Skies shows to our country is that Gil’s ancestors originated from Lithuania, his great-grandfather was a Litvak, the famous Eliezer Ben-Yehuda, the Father of the Hebrew language. Therefore, the presentation of Lithuania’s Jewish cultural heritage was done with an exceptional subtlety and a touch of nostalgia”, said Indrė Šlyžiūtė, Chief Officer of the State Tourism Department, who looks after the marketing activities of the Lithuanian tourism in Israel.

Kaunas, which was the first stop of the camera crew in the country, has got a very romantic portrayal, with the background reading of the poems by Israeli’s renowned poet Lea Goldberg, who was born in Kaunas. Here, Gil not only visited the high school attended once by Lea, but also the Kiemas Gallery, which was presented in the show by Ambassador of Kaunas as European Capital of Culture 2022, Bella Shirin.

Humour is no stranger to the show. When in the Devil’s Museum the presenter is invited to get rid of his own lurking devil – should he have one, and leave it at rest with all the other three thousand of its kind, he promptly retorts while dragging out a little wicked from his pocket: “Yea, sure. That would be my math teacher”. Gil climbed up the roof of the hotel downtown Vilnius to taste the Lithuanian honey from the hives fixed high! The honey and fresh cucumbers got Israeli TV star’s nomination for Lithuania’s best inventions. “No wonder the bees in Lithuania are the happiest in the world, as the studies show”, concluded Gil Hovav when on the roof in Vilnius.

The presenter’s warm feelings towards Lithuania also show in his calling Kaunas Laisvės Avenue the Lithuanian Champs Elysées, Užupis district – the magical land of Lithuania’s Oz, while Birštonas, which hosted once Lea Goldberg for her wellness programme, gives no reasons to doubt at all as to what served the source of inspiration for her creation.

17.5 thousand tourists from Israel visited Lithuania in the first nine months of this year, according to the statistics provided by accommodation establishments. On average, Israelis spent 4.9 nights, totalling to 86.4 thousand overnight stays, which is almost 22 % up against the same period last year!

In October, Lithuania enjoyed the visit of famous Chinese traveller Zhang Wei and his creative crew, invited by the Department of Tourism. His four TV editions feature stories about the Lithuanian rain and the churches of Vilnius, the Wonderful Tile, Pažaislis, the Hill of Crosses... As the Chinese have a special appreciation for amber, Zhang Wei focuses on the seaside educational programme Catching Amber, and tasting the amber stone, together with the guide, tries to tell its difference from other stones. When in Kaunas, the traveller spares no compliments for the Devil Museum and M.K.Čiurlionis paintings.

“As I have already mentioned, it is not easy to invite reputable TV travelling journalists to Lithuania. Credits go to Ina Marčiulionytė, Lithuanian Ambassador to China, who got us into contact with Travel China. She also gave interviews to the creators of the programme on Lithuania’s history, culture and customs. China’s tourism to Lithuania and to the entire Northern European region to that matter has been gaining momentum, with a basic focus on our natural heritage, the Baltic culture, handicrafts and, certainly, the basketball. According to statistics provided by accommodation establishments, the first nine months of this year have seen the inflow of about 13.7 thousand Chinese tourists, which is 38 % up against the same period last year. Needless to say that this kind of TV projects greatly contribute to promoting Lithuania as a tourism destination in this far-away, yet very important market”, says Acting Head of the Department of Tourism Indrė Trakimaitė-Šeškuvienė.

The chefs of as many as eight restaurants in Vilnius, Kaunas and Klaipėda woke up as part of the...

Lithuania #1 among Baltic States by number of tourist overnight stays

Touris ts spend more nights in Lithuania than in Latvia or Estonia. According to EUROSTAT , the...

Lithuania's Economy Ministry has terminated the third competition for the top official of the Tourism...

Beginnings – a place in Vilnius which will see fewer drivers