BNS
aA
Lithuania marks the Mourning and Hope Day on June 14, commemorating the start of the occupation by the Soviet Union in 1940 and the beginning of mass deportations. 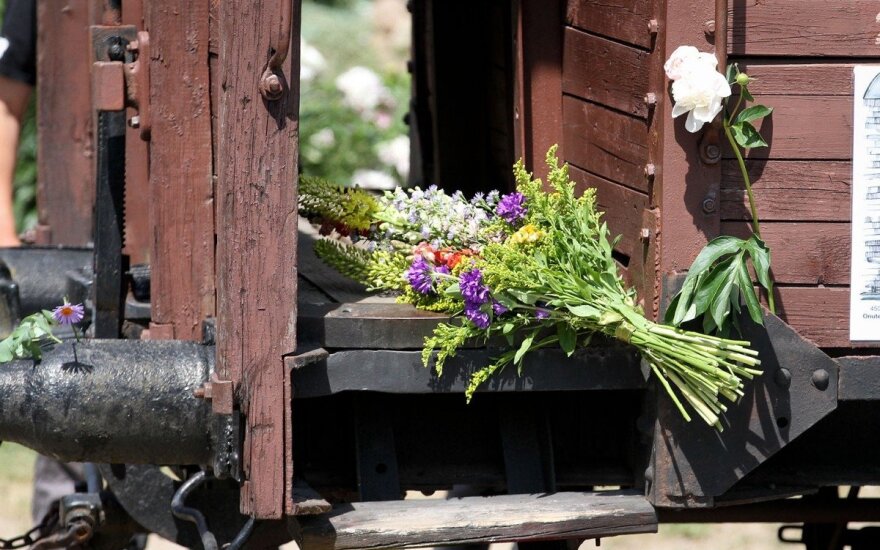 The occupation of Lithuania and genocide were the most painful part of the country's 20-century history, but the nation remained strong regardless of the cruel repressions, says Parliamentary Speaker Loreta Graužinienė.

In her speech during the solemn ceremony at the parliament on Monday, she stressed that "the horrific occupation of 1940 and the cynical and planned genocide of the Lithuanian nation is a sore historic truth, which has changed the life of our nation in an irreversible and significant way".

"This is the nation, which lived an independent life for more than two centuries, creating its statehood, introducing modern innovations and presenting the world with a generation of talented creators of science, literature and art. The first independent Lithuania, assisted by its intellectuals, created an extremely strong civil society with its own language, culture, understanding of the great history of the Lithuanian nation, national identity, self-awareness and respect to a person's freedom as the key value of humanity," said the parliamentary speaker.

She emphasized that the nation kept resisting during the Soviet rule.

"Even more, the world witnessed a small nation's courage and struggle give the crucial impetus to the developments of the end of the 20th century when the great empire of lies, aggression and deprivation of people's spirit – the Soviet Union – collapsed. We can take pride in our strength for fighting for the right to remain ourselves and be free. Regardless of the cruel repressions and Soviet ideology, the spirit of the Lithuanian nation was never broken," she added.

In the end of her speech, she listed the achievements of today's Lithuania: "We are here – a free state in an advanced, democratic and peaceful European family. We are respected, visible and seen in the world. Let's take strength from our past and share it with those who greatly need it today."

On June 15, 1940, the Soviet Union occupied Lithuania. Mass deportations of Lithuanian residents to Russia was started in early hours of June 14, 1941.

Lithuania lost 800,000 people during the period of the Soviet occupation. Approximately 300,000 people suffered from the Communist regime in prisons, forced labour camps amd exile in Siberia and the Far North. One in three prisoners died from torture, hunger of harsh climate. More than 440,000 Lithuanians fled the country from the Communist regime.

Based on the data of the Genocide and Resistance Research Centre of Lithuania (LGGRTC), every third Lithuanian citizen was victim of the Soviet genocide and terror in 1940-1958.

On Monday the exhibition the 12th Kilometre: Lithuanian Citizens Executed in Sverdlovsk in 1942-1943 has opened in the Seimas' Stained Glass Gallery.

A solemn commemoration of the Day of Mourning and Hope and the Day of Occupation and Genocide will be held at the March 11 Hall of the Seimas.

A minute of silence will be observed for the victims of occupation before 12 p.m. A flag raising ceremony will be held in Vilnius Independence Square at noon.

Later, victims of occupation, genocide and Soviet repressions will be honoured at the monuments to political prisoners and deportees in Aukų street near Lukiškių Square and in Naujoji Vilnia railway station. The memory of the first victim of the Soviet occupation, border guard Aleksandras Barauskas, will be honoured in Uta village, Varėna district.

The Monument to the Fallen for Lithuanian Independence will be unveiled in Vilnius Antakalnis Cemetery in the afternoon.

The Museum of Genocide Victims and the Memorial Complex of the Tuskulėnai Peace Park will be open to visitors.