EN.DELFI
aA
At the start of 2017, the Kaunas city public transport bus company launched the ‘KVT Voice’ app (Kaunas Public Transport ‘Voice’) for blind and visually impaired persons. The development of the app, from conception stage through various design and development phases to full implementation, has taken less than a year, an Efcom.lt press release states. 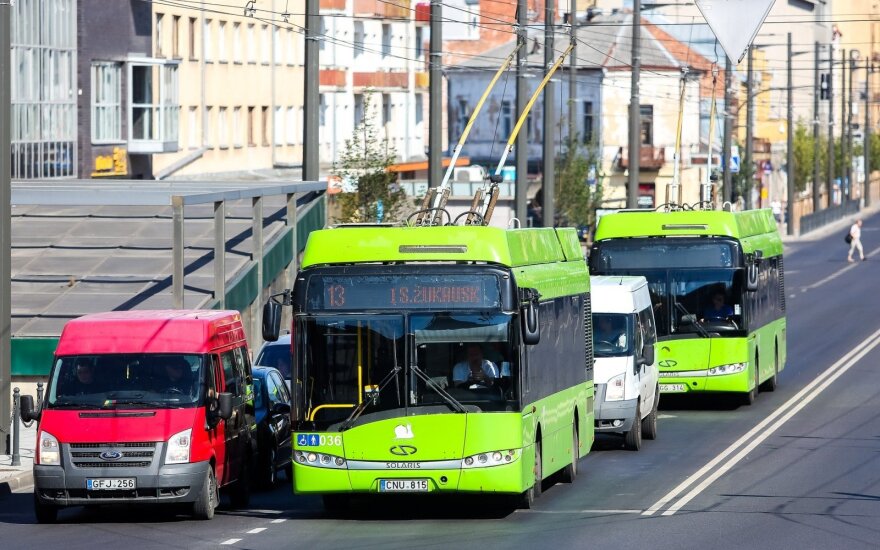 This hardware and software solution allows blind and visually impaired users of public transport a more convenient and faster access to relevant information about services in real-time. It is the first such device in Lithuania, and the inventor believes it may also be the first such mobile application internationally to provide an innovative interactive audio solution in real time to inform on the arrival of public transport vehicles at bus stops.

Paulius Lengvenis - inventor, developer, and IT Manager at Kaunas Bus Company - says the inspiration for the idea came from a meeting he attended with Heads of Divisions and city council members in early 2016. At the meeting, Vice Mayor Povilas Mačiulis explained that he wanted to do something to improve accessibility of blind and visually impaired people, and with leaders from the Blind and Visually Impaired Centre, it was agreed to work on some ideas. Paulius felt the suggestion of having loud speakers fixed to the front of buses to announce the bus number and route direction at a bus stop was a primitive solution in an age where most passengers now had smart phones. Also the envisaged solution was tested a decade ago and received a lot of complains from residents because of noise speakers where creating at early mornings or at night time. "About this time, I was aware of the potential of beacon technology being used in retail, so I thought, 'Why not use the same technology to solve this problem'.

"With a visual impairment it's difficult to know when the vehicle arrives and which service it is. When looking for how to solve this problem, we discussed a number of options with blind and visually impaired users. Finally, we decided to develop software and hardware that enables real-time identification of the incoming bus and provides matching information about it. Such a use is the first of its kind I think", said Paulius.

By downloading the free app "KVT Voice" available on the Google Play store, blind and visually impaired passengers waiting at any bus stop will know what vehicle is arriving and which route and destination it is taking. The app is also currently available with English as an optional second language for users, making public transport more accessible for foreign visitors and travellers to the city.

How does it work?

The main principle behind the device is relatively simple, allowing the real time information on routes (part of the city's PIKAS traffic management system - a system developed within the CIVITAS I programme) to connect with all Kaunas public transport vehicles – 245 diesel buses and 140 trolley buses. Each public transport vehicle is fitted with a small, wallet-size beacon active tag, which in turn sends the information to the user's phone. Standing at the stop, the user's mobile phone will 'speak', telling of the next arriving bus and stating its number and its route destination. Once on board, all buses already have audio announcements of the next stop, so route management for blind and visually impaired is made easier with this added service.

Using Bluetooth 4 Low Energy (BLE) technology, widely used in mobile devices, installation was straight forward, and with relatively low costs. Installation for all public transport vehicles worked out to be approximately €40,000 EUR with an additional amount of approximately €20,000 for development costs of the app.

"We are pleased and proud that this innovation came from Kaunas city. It supports our commitment to providing for the needs of all of our citizens especially those with disabilities. However, this app has shown us how we might now use the same technology to improve service provision of public transport for other groups of users too. We have the system established, we know it works, and we now hope to use this to further expand our knowledge," said the Vice Mayor of Kaunas Rasa Šnapštienė.

Further uses of the app for public transport may include bus stop and journey experience monitoring, allowing passengers to provide instant feedback on the condition of bus stops and the interiors and exteriors of vehicles, unruly behaviour of other passengers, and the driver's driving skills. The potential is there to have a fully active engagement with users of public transport services.

The Kaunas Centre for Blind and Visually Impaired lists around 700 members. They have been asking the city for a long time to provide improved public transport services that specifically cater for their needs. Members from the centre tested the app and provided user feedback to the technical team, with suggestions on how to improve it. Saulius Kavaliauskas – the Leader of the Centre's volunteers - "I myself am visually impaired. During the day, I can just about make out the numbers of buses coming to the stop. However, come twilight time, I am already in need of assistance in defining what buses are arriving. Having this app to tell me which bus or trolley bus is coming and exactly when it will arrive is brilliant. Those who are totally blind have even more difficulties than I do, as they need to be ready at all times, and without assistance often can only guess by the sound of the vehicle which bus has arrived".

For development purposes, having an open protocol means the range of opportunities for future use is nearly unlimited. The development team have started working on possible additional uses. Up to 100 bus stops will have beacon technology fitted before the end of 2018, with another 100 bus stops fitted with beacons by the end of 2019.

Bus stop beacons will allow the city transport team to work closely with other city departments to provide more focused information about the interchange opportunities for passengers breaking their journey.

However, there is by far a greater, and wider potential for this technology to be used not only for public transport services, but also to promote the city's cultural and commercial attractions. In the UK already, two large retailers have tested beacon technology as a means of providing customers with a fuller shopping experience, with other large stores in Sweden likely to follow suit. The potential for Kaunas means that bus stops could provide information to customers within a 50 metre range to provide them with event, product, and price information for attractions in close proximity to the bus stop. Museums, art galleries, theatres, cinemas, shops, cafes, and public exhibitions to name but a few of the many city based cultural and commercial opportunities to increase customer interest in what's going on in the city.

The app can also be used by regular passengers as a hand-held real time passenger information display where placing such display could not be cost efficient option.

Currently, as part of a Ministry of Transport and Communications programme, all the biggest Lithuanian cities are finalising their SUMPs and within the national SUMP guidelines are nine mobility themes – including special measures for social inclusion and disability needs. The EU co-financed 'PROSPERITY' project has been promoting SUMP development in Lithuania, running workshops and promoting best practice from other EU cities. This 'KVT Voice' app show how serious Kaunas is in promoting one of the more difficult of the nine mobility themes.

For the future, with the city planning already for its status of EU Capital of Culture in 2022, this technology has an enormous amount of potential to help the city grow and develop according to the needs and wishes of its citizens.

The city of Kaunas has been at the forefront of transport developments in Lithuania. In previous years, it was an active participant in high profile EU research and development projects including the very first CIVITAS programme (2002-2006) and winner of the prestigious CIVITAS Demonstration City Award. In recent years, the city has actively participated in a number of high profile, innovative EU projects developing mobility management measures in areas such as public transport, mobility planning, and road safety for schools.

The City of Šiauliai has approached the JSC Kauno autobusai with a request to use the application. So it seems Šiauliai will be the second city to deploy the platform. Kaunas will be happy to share it for free.

Administration of the Kaunas City Municipality is considering free public transport in Lithuania's...

Have you ever taken a journey on a piece of art? Now you can take an epic ride on one of Vilnius’...

Experience of a Lithuanian working in Silicon Valley: what actually happens in the cradle of innovation?

Many people all over the world believe that working in a company based in Silicon Valley is the dream...