Justinas Šuliokas and Ludo Segers
Corruption has been habitually singled out as one of the major afflictions slowing down Lithuania’s development, a problem put down to the country’s Soviet legacy as well as frailty of its young institutions. Jovitas Raškevičius, of the Special Investigation Service (STT), notes that the effort Lithuania has put into fighting corruption is bearing fruit, while Liudas Jurkonis, of EY’s fraud investigation and dispute services, highlights that business companies need to invest more into their own internal control systems. 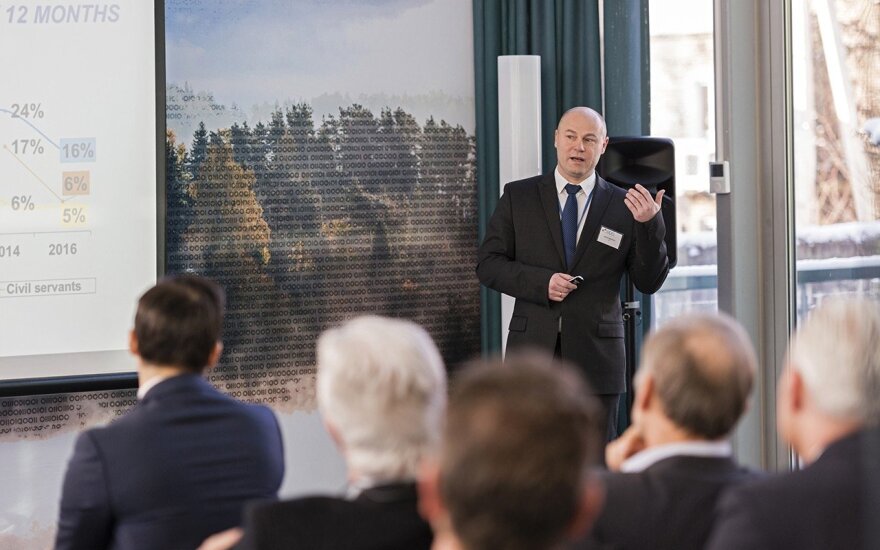 Mr. Raškevičius, who heads the Tactical Analysis Department of Lithuania’s main anti-corruption agency and Mr. Jurkonis, shared their insights with the guests during the monthly EBN Business Breakfast hosted on Thursday by the Embassy of Estonia in Vilnius.

STT is an acronym that sends shivers down the spines of many a public official and business executive. Established in 1997, and spun into an independent agency three years later, the agency has a broad mandate to not only investigate and prosecute big-scale corruption cases, but also carry out analytical anti-corruption intelligence and educate the public about corruption.

Mr. Raškevičius notes that, with access to a number of public registry databases – something that his counterparts in other European countries do not always enjoy – the STT has the capacity to analyse risks and threats even before actual acts of corruption are committed.

“By being one step ahead of the problem, we can give advice to decision-makers how to amend rules in order to avoid corruption,” Mr. Raškevičius explains the idea behind analytical anti-corruption intelligence.

“Pre-trial investigations take a long time. Analytical anti-corruption intelligence does not need to lead to court cases. The goal is not to send somebody to jail, but to make the country more transparent.”

For instance, the STT has analysed data about one of the country’s biggest state-owned companies employing some 10,000 people. It turns out that half of them have family ties with one another. While having a relative working in the same company is not a crime, the results do point to a potential problem and a need for more scrutiny for nepotism.

Lithuania has thrown in not inconsiderable effort into battling corruption – and to some effect. The country is slowly but steadily improving its score on Transparency International’s Corruption Perception Index (38th among the 180 ranked countries in 2017, Lithuania is ahead of Latvia and Poland, not to mention Italy and Spain, although still behind Estonia and most of Western Europe). According to Eurobarometer, corruption experience among business managers has decreased from 21% in 2015 to 7% in 2017.

A new whistleblower law adopted by the Lithuanian parliament is coming into effect in 2019 and will give protection to individuals reporting cases of suspected corruption within their organizations.

The bad news is, according to Mr. Jurkonis, that business companies are not willing to invest in internal control systems to prevent, investigate and root out corruption in their organizations.

“What do companies have in their internal control systems to really control corruption cases? I think that the maximum that they do is ask for conflict of interest declarations [from their employees]. Is it good enough? What do they do with it?” Mr. Jurkonis asks.

In many cases, precious little, he says. A telling piece of statistics suggests that as many as 82% of Lithuanian business executives want stricter enforcement of anti-corruption laws. However, when asked whether regulatory activity makes a positive impact on their business – that is, whether they would welcome scrutiny of their own industries and sectors – only 20% say yes.

“In the Baltics, we speak a lot about corruption and how corrupt the public sector is. But I would turn this question around: What have you done, inside your companies, to make sure that your companies and the industries they operate in do not feed the supply side of corruption,” Mr. Jurkonis says.

Lithuania's opposition has collected signatures for impeachment of MP Artūras Skardžius of the...

The Lithuanian Labor Party may change its name after law-enforcement officials have formally brought...