BNS
aA
It is proposed to put up special information boards at sites of mass Jewish graves in Lithuania to display both the names of those killed and as detailed information as possible about their executioners. 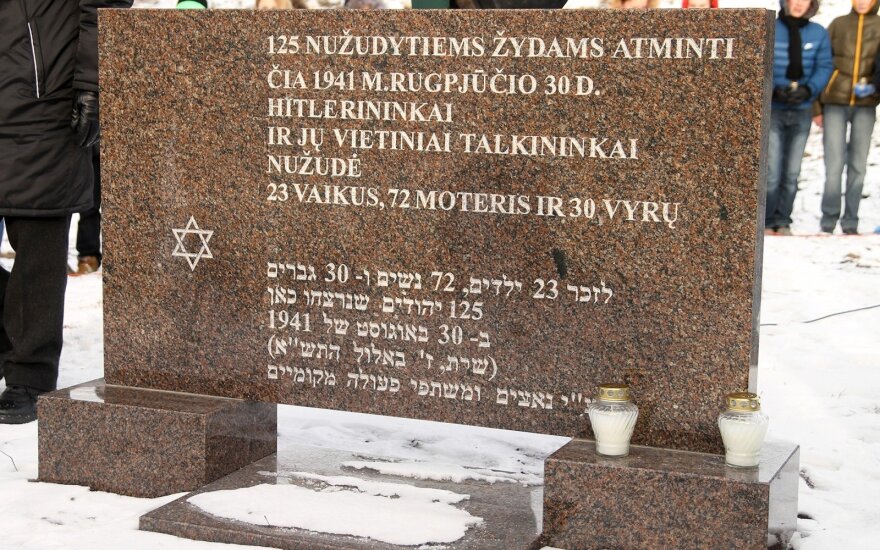 The initiative was unveiled on Thursday by Eugenijus Jovaiša, chairman of the Seimas Committee on Education and Science.

Related articles
Holocaust researchers: the public should be educated, not shocked
7th Litvak Days in London

Jovaiša says that the idea was raised by Israel's ambassador to Lithuania, Amir Maimon, a year ago and has been cherished for some time now by the Genocide and Resistance Research Centre of Lithuania (LGGRTC), but adds that realizing it would require increasing funding for the centre.

According to the chairman, currently there are only two mass Jewish grave sites in Lithuania where one can read the names of those killed. Another such board has just been put up in Leipalingis, a small town in the southern part of the country, and will be formally unveiled on Friday.

The lawmaker said that around 86,000 euros would be needed annually for performing research and putting up boards that would not only tell visitors about the Holocaust and the killings that took place in the area, but would also provide the names of the victims and their age and concrete information about their killers.

LGGRTC Director Teresė Birutė Burauskaitė said that the centre had long ago set itself the goal of ensuring that the victims of the both Nazi and Soviet regimes "are not nameless".

According to the director, the proposed boards would also inform visitors about the life of local Jewish communities before World War Two and the attitude of the local population towards the Holocaust.

"Our aim is to show what happened as thoroughly and comprehensively as possible. We need everything that is available today: all documents and witness testimonies. If we committed ourselves only to providing a list of all victims, we could name around 80 percent of them. But for us it is very important to show all these processes and their participants so that history is present in each of these places," Burauskaitė told reporters.

LGGRTC would be helped by the Vilnius Gaon Jewish State Museum and others who "see the meaning and necessity" of such work, she said.

According to LGGRTC data, there are about 200 mass Jewish grave sites in Lithuania.

About 90 percent of the Lithuanian pre-war Jewish population of over 200,000 died during the Holocaust. Around 3,000 Jews currently live in the country.

Since 2011, The Lithuanian Embassy in London along with other organisations have been running the...

Professor on Jewish massacre participants in Lithuania: it was not just a handful of degenerates, but also part of the intelligentsia

Internationally-renowned Litvak painter Samuel Bak , back in Vilnius for the opening of his museum,...