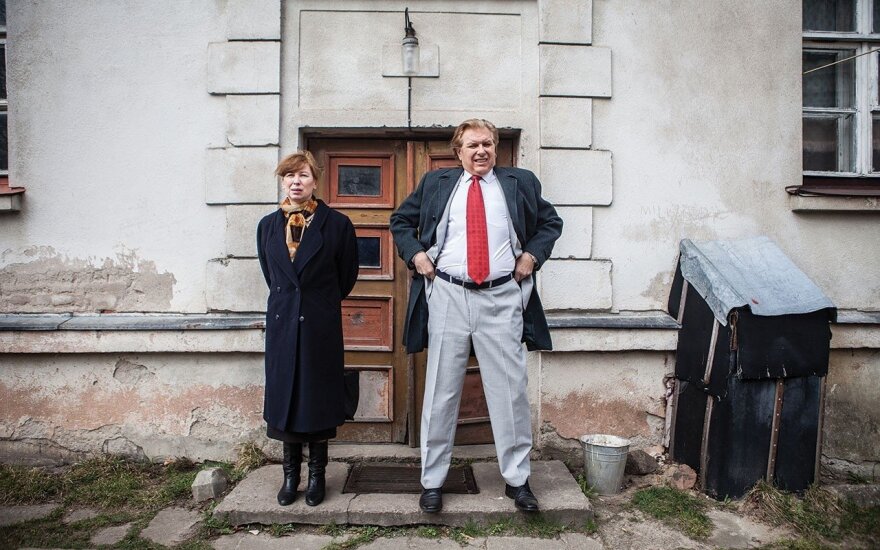 What is your inspiration behind this film?

In my film, I wanted to tell a story of a strong woman in a Lithuanian countryside. This is a woman who is good at her job, who is in charge of the household, who carries a lot of responsibility and who cannot allow herself to fail as all the men around her do. I grew up around very strong women, well-educated, doing the best they can, and carrying the entire household on their shoulders. And at the same time, I saw and still see lots of men in our country being locked into a macho image, drinking, getting depressed. I do think that our mothers and grandmothers were and still are the people who make things in our country work. And the main character Irena is a woman like this.

Related articles
In September, premieres of Lithuanian productions will take place at the leading film festivals
Lithuania at the Berlin Film Festival

People, who were atheists during Soviet times and became strong believers when Lithuania regained independence, have always made me very curious. I've tried to imagine what has to happen for a person to transform his views so drastically. I wondered: did these people really become believers? Or did they just pretend in order to adapt to the new situation, in order to survive? Is it easy to change the mind as fast as the system? This question still remains a mystery to me. But I think that in order to change so radically, one needs to have crucial experiences in life.

And to create the situation which enables the change of my main character, I used another story from early nineties which inspired me a lot. In the town where I was born we had a nice public building near the main park. A guy, whom no one knew came from UK and said that he will rebuild this building and will make a new entertainment house there. He had a huge plan for it. I don't how come the local government trusted him, but he was handed this big building and he destroyed it in order to build a new one, but then something happened and he just disappeared until now there is a hole in that place. I really find it very amusing to think, how everything and everyone Western-related were adored and unconditionally trusted and all the past was neglected at that time.

How did this project originate?

This project originated long time ago in 2008. It was the the first fiction script that I decided to write. I didn't know a thing about screenwriting then. It was a story "Back home" which had one American guy and five main women that he deceives. I went to the MFI screenwriting workshop with that story. Later, Jan Fleischer, whom I met there, became my MA writing teacher. The story started to change: it became about an Ameri- can man and 3 women, then finally it became a story of a man and a wom- en, written from a woman's perspective. When I look at how complicated the story was in the beginning and the simplicity I see now in the film - I see a long path. But I can't say that I worked on the script all those years. During that time, I finished my writer's MA, made some short films, a feature documentary. I think the changes in that story also reflect the chang- es I went through, and the things that I have learned.

How did the lm get off the ground? What was the pro- cess of getting the lm made?

Well, I guess that all the credit goes to Lukas Trimonis, a film producer and a good friend of mine, who believed in this project from the begin- ning and managed to convince other producers and financiers about the value of it.

However, again, it was a long process - it was the first feature fiction film for both of us, so we wanted to bring experienced crew members on board. We succeeded in this and it helped to move the project forward. Nevertheless, when we finally got the support from Lithuanian Film Center, it was really hard to believe that we finally made it.

What did you discover during the process of making the lm?

Nearly everything was a big discovery. But my biggest personal discovery was that I enjoy working on the visual side of the film.

I am a big art lover and a lot of inspiration for me comes from different paintings and photos. And this film was the first chance I had to work on visuals properly. Collaboration with director of photography Emil Christov and production designer Ramūnas Rastauskas was very fruitful and creative. We talked a lot about the story, colors, compositions, then we looked at different films, paintings, photographs to understand what we are seeking and if we are on the same page. Actually, I was surprised how simple it was. I really think that we understood each other because on set we all kind of instinctively knew how it had to look like. But I am sure this mutual feeling came because of the long discussions in preproduction.

I am very happy about the visual unity of style that we have achieved in this film.

What were the main challenges while making this lm?

The tone of the film was always an issue - some people read it more like a drama, some - more like a comedy. Myself, I always thought it being a tragicomedy, however, in the editing process it became more of a drama because I felt I needed to be more serious to make us feel for the main character. However, I never wanted it to be a proper drama. I always thought it has to have a bit of an above-the-reality feel to allow us feel the story in a more universal way.

What I am happy about is that the film has quite a strange tone: it is sometimes funny, sometimes sad. And to achieve something in-between like this is very difficult, there is no recipe to do it other than trying, but I think it works.

What kind of subjects are you drawn to as a lmmaker?

I would say that for me the most interesting function of a storyteller is breaking the spell of things. I find it very interesting how statuses (pro- fession, age, nationality or religion) make us perceive the same people in very different ways: a buddhist monk must be an enlightened person! A theater director who talks little is probably a genius! An American who comes to Lithuania in 1992 is probably there to save you! But there is al- ways humanity hidden underneath it with its strengths and weaknesses, sufferings and wishes. And I am always really curious to find this hidden human condition underneath all the masks and statuses.

Why did you choose an international cast?

It was on purpose. When I do casting, I always look for something per- sonal in the story for the actor to relate to the character. I thought it was crucial that Bernardas is created by someone who does not come from Lithuania and even uses a different acting method. Therefore, Vyto Ruginis, who is an American with Lithuanian roots (like the character Bernar- das) and who doesn't speak proper Lithuanian, was a perfect fit for this role.

And for the priest and Daniel Olbrychski, it was a different story. I really wanted the priest to be very different from all the other people in the village. And once we got Polish co-producers, it seemed like a very good and historically plausible choice to make him Polish.

You are a screenwriter. Why did you decide to direct the film?

I decided to do it because I had a clear vision in my mind of how the screenplay should look like and because I grew very close to this story and didn't want to let it go.

And I must say, it was interesting but very challenging to direct my own script because I really think that after carrying something in your mind for so long it becomes difficult to see it as it really is not what you imagined it to be.

Also I definitely noticed one thing my entire journey of creating this film was a journey towards simplification. So, directing the film was simplifying the script and editing was removing even more details from shooting. Sometimes I thought that some details in the script were very important, but finally they had to go.