Hot in the city

Brendan Harding | the Lithuania Tribune
In cities across the world there has long been conflict between cyclists and pedestrians. As the temperatures soared in the Lithuanian capital a visitor discovers that Vilnius is no different. 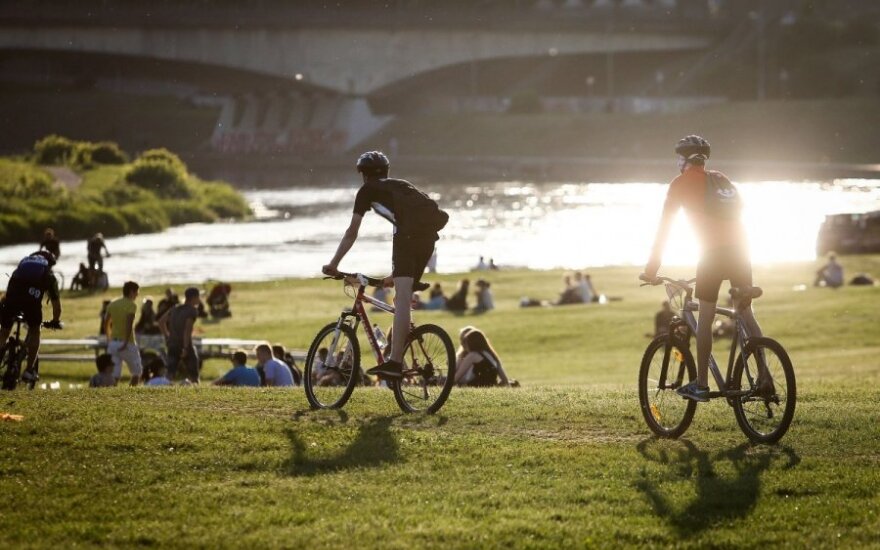 It’s been a long hot summer in Lithuania. Temperatures have nudged the mercury ever closer towards record levels and the country’s residents have become imaginative about finding respite from the disabling heat.

In parks, pools, lakes and forests across the country every scrap of welcome shade and every drop of watery relief is at a premium.

Along the sand dunes of the Curonian Spit families have sought refuge in the cooling waters of the Baltic Sea, ice-cream supplies have dwindled dangerously low, and on every table in every seaside restaurant no culinary offering is complete without that obligatory and pink Lithuanian icon of summer, šaltibarščiai.

In the city of Vilnius, for those unable to escape to the cooling dark forests and green lakesides, it’s not just the mercury which is rising; tempers also appear to be on the boil.

As a visitor to the city it was on one such late-July evening that my partner and I sought the solace of the evening’s cooler temperatures. Freed from the confines of a sweltering fifth-floor apartment the umbrella of greenery in the nearby Verkiai Regional Park called like a refreshing siren of cool.

As the sun sank below the tree-line and a small breeze stirred the leaves of the highest tree-tops we strolled in silence along a quiet pathway; bliss at last, or so I thought.

It was then, to the sound of a manically tinkling bell and a litany of swear words, a cyclist swept past, glancing over his shoulder to ensure that the raised middle finger he was demonstrating had been duly noted.

But there was plenty of room for all three of us, I protested to my partner. In fact, from what I could determine, a Tour de France peloton could have no complaints.

But where are pedestrians supposed to walk? I asked stupidly. She pointed to a strip of pavement twenty metres away running adjacent and parallel to the main highway, “there” she answered.
I thought of heat-frazzled parents attempting to keep their children under a tight rein after a day cooped in a hothouse apartment; attempting to deny them the freedom of running free; attempting to keep them safe and alive as the traffic sped past in continuous metallic lines belching their poisonous fumes in to the air. Meanwhile, the cyclists had it good.

Further on the two paths converged and a kind of truce was declared through the painting of a single, white, peace-line separating the protagonists. Cyclists still swept past mothers and toddlers at breakneck speed, only swerving to avoid them at the last minute; bells ringing like Easter Sunday in the Vatican. When eye contact was made, filthy, undisguised malignant glares were exchanged and a dark cloud of unabashed contempt descended on a place of supposed peace and tranquillity. If ever a cooling breeze was required, it was now.

Inside the park proper, where trees lined the wide, car-free roads in the manner of a triumphal arch, there would be room for everyone. We strolled by the roadside picking ripe, red berries, occasionally stopping to listen as a woodpecker drummed on a distant tree.

Young adults swam in a lake, smoked cigarettes and passed a cooling drink between them. Families walked serenely; a happy father with a little-one perched high on his shoulders while a contented mother looked on and smiled with the inner-peace of a Madonna. And from over a low rise in the road two young boys cycled their bicycles towards us.

There were on the same side of the road where we walked – conscious of the golden rule ‘face the oncoming traffic’. Their happy laughter gave way to the sound of honking which came from the handlebars of the lead cyclist. At only eight or nine years of age he had already learned the code of war between cyclist and pedestrian as he steered his vehicle straight at us. No quarter given.

It was then he began to shout. It was also then that he transformed from being a happy-go-lucky boy on an evening cycle in a beautiful place, and became another combatant in an ongoing conflict.

Without the gift of the Lithuanian language I told the boy, in English and in no uncertain terms, to show some manners and pointed out the fact that there was space enough for everyone. He curled his young lips into a scowl and took aim. “Asshole” he shouted and was gone.

On the way back home we glanced continuously over our shoulders; every whisper of every breeze in every tree became another speeding cyclist hell-bent on our destruction and on the destruction of every pedestrian. It was a tense and long way.

I have lived in and visited other cities where cyclists and pedestrians vie for space. In most the golden rule of showing some common respect appears to keep the conflict at bay. And just like in all conflicts there is a need for diplomacy and basic human goodness. And especially, when temperatures rise and collars get hot the need for cool heads and common courtesy applies to each and every one of us, both cyclist and pedestrian.

Ramūnas Navardauskas made minor history Friday when he became the first Lithuanian cyclist to win a...