David van Roon, the Lithuania Tribune
aA
Filming for the new US TV film The Cobbler started in Vilnius this week. The film is based on a short story by Tolstoy and stars Hollywood legend John Rhys-Davies. “We all quickly started falling in love with Lithuania,” said producer and co-writer of The Cobbler, Russ Kendall. 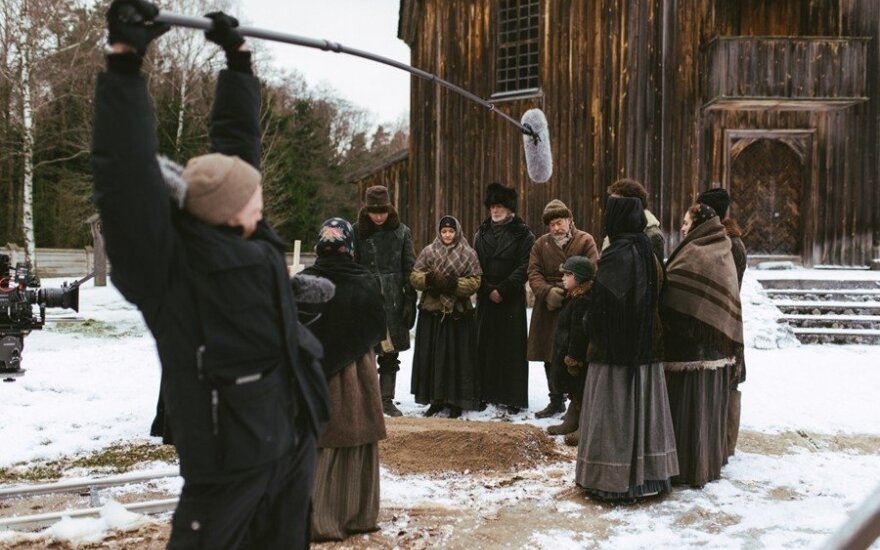 On set of The Cobbler

The Cobbler, which is a working title, is based on Tolstoy’s short story ‘Where There is Love, There is God’, and takes place in a rural Russian village at the end of the 19th century. Kendall, who’s production company Kaleidoscope pictures is based in the US, went to scout locations all over Russia and the Baltics, but it did not take long for him to decide on Lithuania.

The film tells the story of a shoemaker who has lost his wife, and is now bitterly waiting for his life to end. But one night he has a dream in which he is told God will come visit him. A series of encounters leaves him questioning his faith.

The crew for The Cobbler had already filmed in Rumšiškės and Vilnius’ Old Town when they retreated to the studios of Baltic Film Services, close to Vilnius' Užupis district. The studios are hidden in an old textile factory.

The halls are empty, cold and huge, offering more than enough space to build giant sets. Part of the successful BBC War & Peace series was shot in these factory halls.

Actor John Rhys-Davies, famous from films such as Lord of the Rings and Indiana Jones, was taking a short break from filming when David van Roon of the Lithuania Tribune ran into him just off the set. Rhys-Davies was in full costume – a large beard, indiscernible from real, adorning his face – and was having a quick cup of tea between takes. Rhys-Davies is playing the lead in the film.

The Welsh actor who had been in Lithuania for more than a week, had not had time to explore Vilnius yet. “I am in almost every shot, and our days have been very long. We have simply been working between 14 and 16 hours a day. This can be hard, particularly when you are younger. Your internal clock is different then. When you get older you develop more stamina.”

Rhys-Davies, alongside one other actor from the UK, is the only non-Lithuanian actor playing in the film. Most of the parts are played by Lithuanians.

“We did not plan for that,” explained Kendall: “I thought we’d bring our whole lead cast, about 7 people, from the UK. But when we were doing our first auditions here I realised that would not be necessary. Lithuanian actors are fantastic.”

It is not only the actors Kendall is impressed with. His face lit up when he pointed out details on his set: a life size reproduction of the cobbler shop. The attention to detail is extreme. A big basket in the shop is filled on the inside with furs, small cups line the shelves on the walls, disheveled blankets cover a 19th century size bed.

Even though the camera won’t be able to see all of this. There is even a wood fire burning. “Artisans here rival or even surpass anybody I’ve worked with in New York and Hollywood,” said Kendall.

After the shooting of the successful War & Peace series, more and more productions are choosing Lithuania as a film location. The country is gradually claiming its place on the map of international film locations.

The Cobbler is supposed to be a true holiday film, in line with the spirit of Christmas and Thanksgiving. Rhys-Davies, a great Tolstoy admirer himself, explained why the story still works nowadays.

According to him it is about the human condition and “about the notion that no matter how encrusted our lives are, no matter how immobile we have become in our hearts, the possibility of thawing ourselves out is still there.”

The film will air in the United States in November of this year, around Thanksgiving. After its initial airing it will be available worldwide and on Video On Demand.

A screening of The Midwife at the Embassy of Finland in Vilnius this past Friday saw members of the...