(1)
BNS
aA
The Immovable Cultural Heritage Assessment Council, part of the Department of Cultural Heritage, voted on Tuesday to recommend that Soviet-era statues, that used to stand on the Green Bridge in central Vilnius, be crossed out of the list of protected heritage. 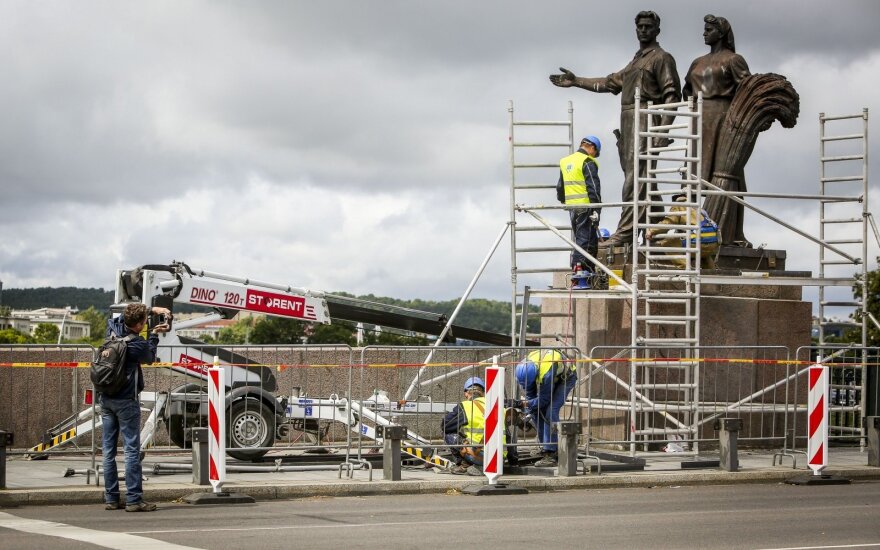 "The Council voted unanimously for stripping the Green Bridge and its statues of legal protection," Rūta Evelina Sutinytė, spokeswoman for the department, told BNS.

The Council also recommended that the statues, removed from their site last summer, to be kept at a museum.

The final decision on stripping the statues of their legal protection will be made by Culture Minister Šarūnas Birutis. But the procedure of removing them from the register of cultural valuables would take around three months, the minister's spokeswoman Dalia Vencevičienė told BNS.

Birutis believes the statues should not be put back on the Green Bridge.

The four groups of statues were removed from the Green Bridge last July, under the pretext that they were in need of repair and presented a safety hazard.

The Soviet-era statues, erected in the 1950s, had been a subject of heated debates, with some saying that they were beacons of Soviet propaganda and therefore had no place in independent Lithuania. Others argued that the statues were part of the city's history, however painful to remember.

Critics of the removal also said that the statues were an inseparable part of the bridge and accused the government of politicizing.

The Culture Heritage Assessment Council plans to deliberate on whether the Soviet sculptures...

The new chairwoman of the State Cultural Heritage Commission will look into the fate of the soviet...

There will be more clarity about the fate of the Soviet statues which were recently removed from the...

The Soviet statues on the Green Bridge in central Vilnius will not be removed from the Register of...

A special council that held a meeting at Lithuania's Department of Cultural Heritage on Tuesday asked...