Christine Neijstrom | The Lithuania Tribune
aA
The Vilna Gaon State Jewish Museum Holocaust Exhibit, housed in a traditional wooden green house on Pamėnkalnio gatvė, commemorated the 70th anniversary of the liquidation of the Kaunas ghetto on 30 September. The commemoration was scheduled to coincide with the centennial of the birth of the museum’s co-founder and Kaunas ghetto leader, Dmitrijus Gelpernas. 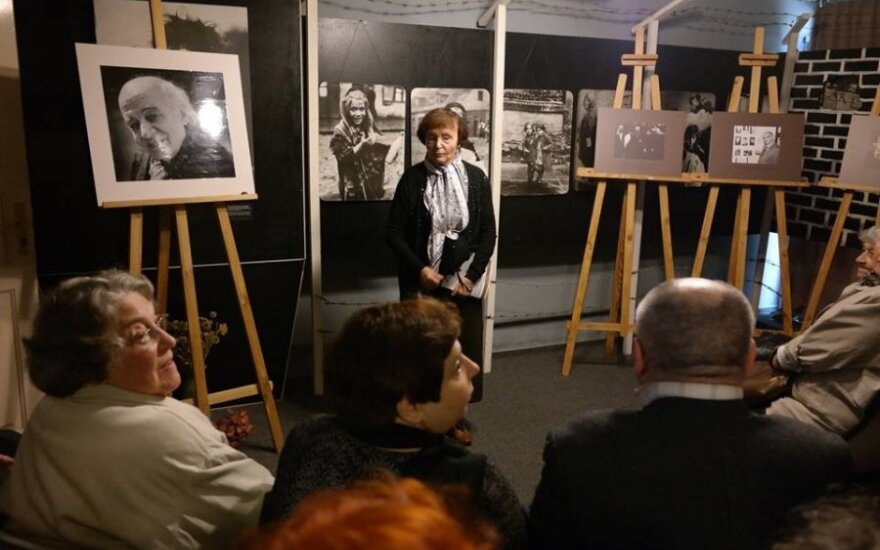 Gelpernas was honored for his efforts as a leader of Kaunas ghetto’s underground resistance movement, Antifašistiše kamfs organizational (Anti-fascist organization).

Head of the Holocaust Exposition, Rachelė Kostanian said, “He was like a captain of a ship. He was almost the last to leave the ghetto. He was trying to save as many people as possible. He had established connections with the partisans in the forest and they had ways to get people there. In the last days, he was sending people by foot, giving them, on a piece of paper, the way. He couldn’t save himself. He was at the liquidation of the ghetto and sent to Dachau concentration camp. He was the last, the captain, almost the last one. He cared about everyone but himself.”

After his liberation from Dachau, Gelpernas returned briefly to Kaunas before moving to Vilnius, where he raised his family. He was a key figure in creating the Association of Lithuanian Jewish Culture and the Vilna Gaon State Jewish Museum. Gelpernas wrote and lectured extensively about the Kaunas ghetto resistance. He died in 1998 and is buried in a military cemetery in Vilnius.

Elvyra Užkurelytė read the preface to a book dedicated to Dmitrijus Gelpernas on behalf of the author, Sara Ginaitė-Rubinsonienė, a former Kaunas ghetto prisoner and resistance fighter now residing in Canada. Publication of the book is anticipated in 2015 said the Holocaust Exhibition Head of Unit Neringa Latvytė-Gustaitienė.

Attendees also visited the museum’s malina exhibit, a reconstructed hiding place created in 2013. Malinas were built throughout the Vilnius ghetto until its liquidation in 1943.

“The word malina [derived from Hebrew] is for hotel. In the ghetto, hiding places were called malinas as a joke, a bit sarcastic. We have made a malina here but it would be impossible to reconstruct a real malina because in every case it would be too luxurious. Malinas were in basements, ovens, sewers, the most unexpected places, wherever people could hide. In our malina, maybe 30 people would be hiding. Malinas were always overcrowded. In people’s remembrances they always say malinas were dark, cold, that there was a lack of space, and a lack of air.” said Museology Specialist Milda Jakulytė-Vasil.

The malina exhibit also serves as a small theater to a documentary based on teenager Ichok Rudaševskis’ 1943 diary entries recounting his experiences hiding in a ghetto malina on Vilnius’ Šiaulių gatvė.

The September 30 co-commemoration of Glerpernas’ birth and the July 1944 liquidation of the Kaunas ghetto occurred a week after a number of other events held in memory of Lithuania’s Holocaust victims.

On 23 September, the anniversary of the Vilnius ghetto liquidation in 1943, the Lithuanian parliament observed a moment of silence and invited witness accounts from Kaunas ghetto survivors. There, Seimas speaker Loreta Graužinienė remarked, “This day is to commemorate the Genocide of Lithuanian Jews, during which, the majority of the large pre-war Jewish community in Lithuania was exterminated.”

On 22 September the Vilna Gaon Jewish State Museum held its fourth annual reading of the names of ghetto prisoners. For four hours, volunteers read names from the 1942 census list of 18,000 Vilnius ghetto prisoners.

The Museum’s Holocaust Exhibit at Pamėnkalnio gatvė 12 is open Monday-Thursday from 9:00-17:00, Friday 9:00-16:00, and Sunday 10:00-16:00. Persons interested in learning more about the museum or volunteer opportunities may write to Milda Jakulytė-Vasil at milda@holocaustatlas.lt.