Louis Garrick | the Lithuania Tribune
aA
President Dalia Grybauskaitė yesterday awarded the Life Saving Cross to forty-six Lithuanian citizens who risked danger to save Jews from probable death in Nazi-occupied Lithuania during World War II. Of the forty-six, only two were still alive to receive the award in person. 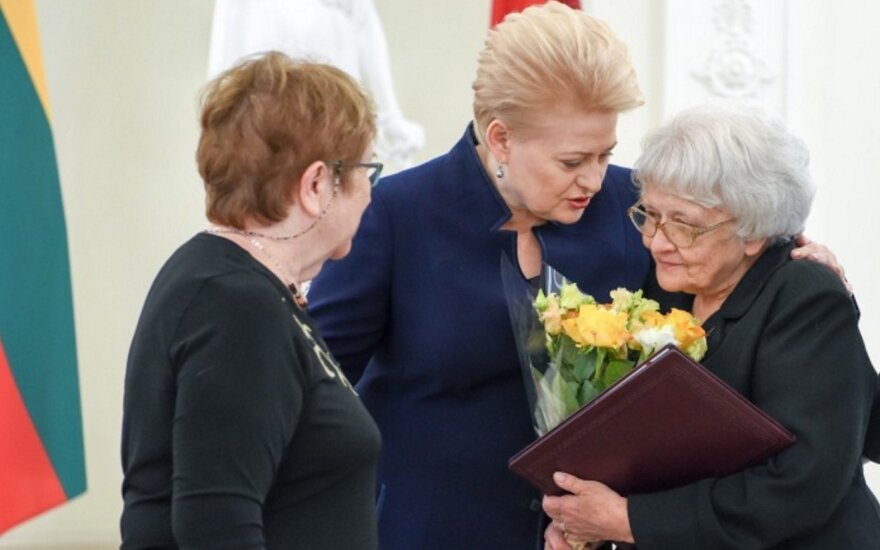 “All rescue stories touch our hearts and souls. They tell of great courage and compassion, readiness for sacrifice to save another human being, to save someone else’s child as your own, and willingness to risk everything that you hold very dear,” Ms. Grybauskaitė told the descendants of the award recipients in a ceremony at the Presidential Palace.

“Those brave men and women could have lived their life without any risk. They could have stayed safe—all they had to do was to watch in silence, or pretend not to see or hear what was going on. But the rescuers saw only one path ahead: to open the door and share their home, bread and the warmth of their heart,” Ms. Grybauskaitė said. “It all happened at a time of a very brutal war. But humanity—in action, not words—prevailed.”

Related articles
Kaunas family to be awarded as Righteous Among Nations
Man of the year of LRT Radio on Jews, Russia and theatre

That brutal time was during Germany's occupation of Lithuania, which began in June, 1941, and lasted three years. Approximately 195,000 Jews were massacred by Nazi occupiers with collaboration from some Lithuanians—more than 90 per cent of the combined pre-War Jewish population of Lithuania and Vilnius, which was located in Polish territory prior to the War.

Commemorations for the dead have been held across Lithuania over the past month at massacre sites, old Jewish cemeteries and in town squares. A memorial march in the town of Molėtai attracted more than 1000 people.

This year's Holocaust remembrance period has had a special focus on those non-Jewish Lithuanians who, despite grave danger to their families and themselves, made the decision to save, hide and help Jews evade death during World War II. Some were intellectuals with an ideological objection to the occupying regime, but many were ordinary people—farmers, peasants—who extended a life-saving hand to their neighbours in extraordinary times. Last Sunday, the Lithuanian Parliament, or Seimas, hosted a conference organised by the Lithuanian Jewish Community dedicated to the theme of rescuers of Jews.

At yesterday's presidential event the Lithuanian Jewish Community's Chairperson, Faina Kukliansky, paid tribute to those who “dared to stand up” to the “brutal and bloody mechanism of fear and manipulation” at play in Lithuania during the War. “Their moral values have made them the best advocates and ambassadors for the country,” said Ms. Kukliansky, who also reiterated calls for a monument in their honour to be erected.

The Life Saving Cross is a Lithuanian state decoration conferred on persons who, despite danger, performed an act of bravery that saved someone's life. Three-hundred-and-forty-five have been awarded since the restoration of Lithuania's independence in the early 1990s. In recent years, most of the recipients have been Lithuanians to who saved Jews during World War II. In 2015, President Grybauskaitė awarded 47 in a ceremony similar to yesterday's; 51 the previous year.

Since its establishment in 2015, Israel's Embassy in Lithuania has held two ceremonies of its own in which 17 Lithuanian citizens were recognised as Righteous Among the Nations, bringing the total number of Lithuanians on that list to 889.

At yesterday's event, President Grybauskaitė also acknowledged the passing of Shimon Peres, the former President and twice Prime Minister of Israel, Nobel Peace Prize winner, and a Litvak born not far from Vilnius. A moment's silence was observed.