Germany could lend Lithuania 1918 independence act, but not hand it over

BNS EN
aA
The president of the German Federal Archives says that Germany could lend Lithuania the original copy of its 1918 declaration of independence recently found in Berlin for a year, but it should not hand the document over to the country. 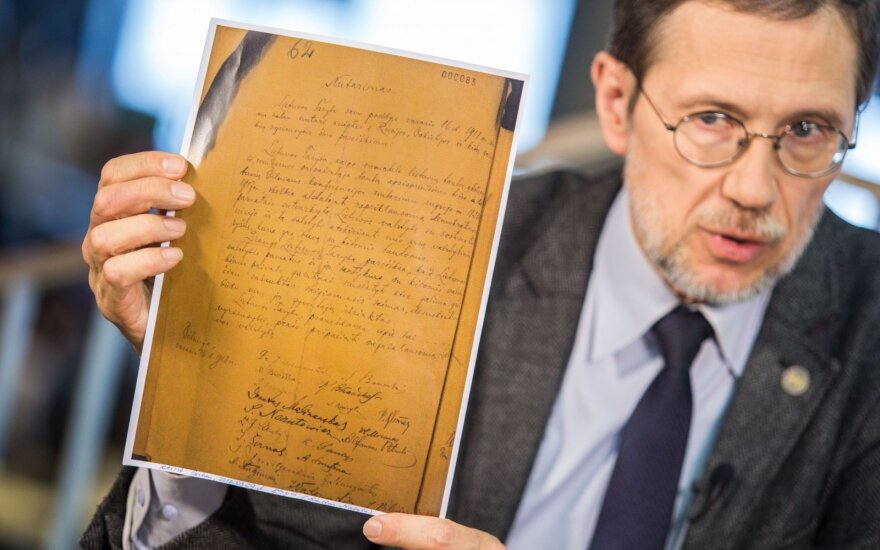 "What seems to be conceivable from my point of view is an official lending, for example, for the period of one year -- the centenary of the independence of 1918," Michael Hollmann told BNS.

"Separating the original document from its context and handing it over to Lithuania, however, would constitute a precedent with unforeseeable consequences for generally acknowledged basic principles of archival and historical work -- not only in Germany, but worldwide," he said.

Liudas Mažylis, a professor at Vytautas Magnus University, found the Council of Lithuania's resolution proclaiming the restoration of an independent state of Lithuania with Vilnius as its capital, written by hand in Lithuanian and German and with 20 signatures on it, in Berlin's diplomatic archive in late March.

Lithuanian President Dalia Grybauskaitė has expressed her hope that Germany will hand the document over to Lithuania as a gift on the 100th anniversary of the restoration of its statehood.

Presided by Jonas Basanavičius, the Council of Lithuania signed the Act of Independence in Vilnius on Feb. 16, 1918. Historians believe that several original copies of the document were signed on that day, but the whereabouts of the others are unknown.

Hollmann says that Germany "perfectly" understands that document is of high value to Lithuania.

"As far as I know, the colleagues of the Federal Foreign Office's Archives acknowledged and underlined that fact by quickly providing Lithuania with a reproduction of best quality," he told BNS.

However, the Federal Archives' president thinks that it would be a mistake to separate the document from the file.

"The letter regularly became part of the Foreign Office's registry, as any letter and its attachments would have, and is now an integral part of an entire file kept at the archives, which it should not be separated of," he added.

In the president's words, archivists are very reluctant to put a price tag on a single document.

"Archivists are very reluctant to evaluate single documents with a specific price. The value of archival holdings lies in its integrity and authenticity, and therefore the German Archival Law states clearly that archival material of the Federal Archives is inalienable. Every user of archival material might find a document of very high personal value to himself - but it is of course impossible to grant every user the right to possess the documents of specific value to him," he said.

Hollmann also doubts that the document could be permanently deposited in Lithuania.

"A permanent depositing of the document in Lithuania would in fact have the same character as an official transfer or handover. I doubt that such a solution would be compatible with German and international law," he said.

Journey of the Resolution

Jurgis Šaulys, one of the 20 signatories of the Council of Lithuania's resolution, handed the copy to Eckart von Bonin on the afternoon of Feb. 16, 1918. The German diplomat sent it to Chancellor Georg von Hertling in a letter on March 22. The document shortly afterwards reached the Foreign Office, were it was registered according to the usual administrative procedures of that time.

After World War Two, the Foreign Office's files were stored and archived by the Allies and were returned to the office in 1950. The 1918 Act of Independence has since been stored in the Federal Foreign Office's Political Archive.

Lithuanian diplomats admit that the document could only be handed over to Lithuania through Germany's political decision in a gesture of good will. Lithuania's expectations have already been voiced at the highest level -- in Grybauskaitė's letter to the German president and during a conversation between the foreign ministers of the two countries. Diplomats have also discussed this issue with Chancellor Angela Merkel's advisors.

A facsimile of the 1918 Act of Independence handed by the German foreign minister to his Lithuanian counterpart is currently on display at the Martynas Mažvydas National Library in Vilnius.

A facsimile of Lithuania's 1918 Act of Independence on Thursday will be handed over to the Martynas...

Lithuanian and German foreign ministers agreed on Friday that an original copy of Lithuania's 1918 Act...

Liudas Mažylis , the man who on Wednesday found what is believed to be an original copy of...

A historical event for Lithuania