BNS EN
aA
Lithuania's Foreign Minister Linas Linkevičius says that conversations with Germany's government over handover of the February 16 1918 Independence Act to Lithuania are going well, downplaying the opinion stated by Germany's head archivist who said that the document could only be lend on temporary basis. 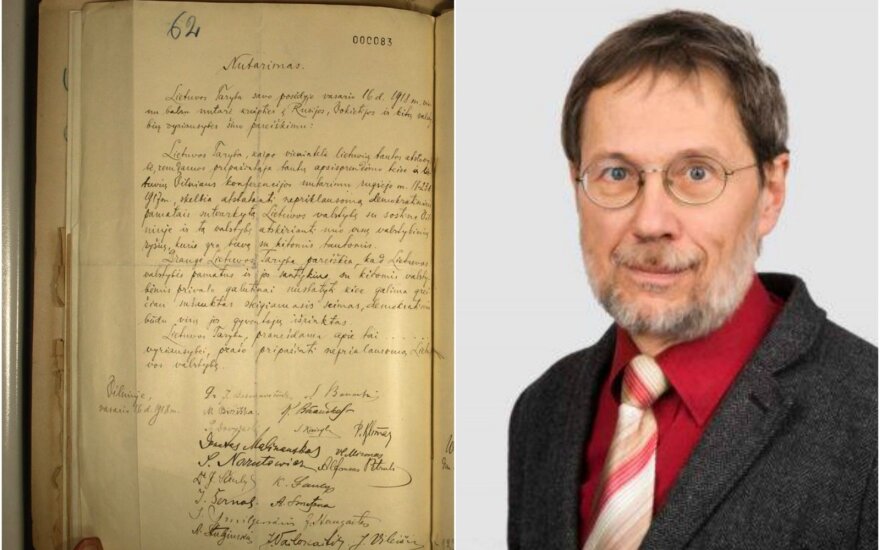 "The conversations are very smooth and friendly, we only need to have some patience and we will see the process through. My advice is to refrain from summarizing conclusions about separate statements by archival officials. The statements may be important, however, it is not a state opinion. There are definitely no reasons to worry," the minister told BNS on Friday.

Michael Hollmann, the president of the German Federal Archives, has said that Germany could lend Lithuania the original copy of its 1918 declaration of independence recently found in Berlin for a year, but it should not hand the document over to the country.

"What seems to be conceivable from my point of view is an official lending, for example, for the period of one year -- the centenary of the independence of 1918," Hollmann told BNS.

"Separating the original document from its context and handing it over to Lithuania, however, would constitute a precedent with unforeseeable consequences for generally acknowledged basic principles of archival and historical work -- not only in Germany, but worldwide," he said.

Liudas Mažylis, a professor at Vytautas Magnus University, found the Council of Lithuania's resolution proclaiming the restoration of an independent state of Lithuania with Vilnius as its capital, written by hand in Lithuanian and German and with 20 signatures on it, in Berlin's diplomatic archive in late March.

Presided by Jonas Basanavičius, the Council of Lithuania signed the Act of Independence in Vilnius on Feb. 16, 1918. Historians believe that several original copies of the document were signed on that day, but the whereabouts of the others are unknown.

Germany could lend Lithuania 1918 independence act, but not hand it over

The president of the German Federal Archives says that Germany could lend Lithuania the original copy...

Lithuanian and German foreign ministers agreed on Friday that an original copy of Lithuania's 1918 Act...

Liudas Mažylis , the man who on Wednesday found what is believed to be an original copy of...

A facsimile of Lithuania's 1918 Act of Independence on Thursday will be handed over to the Martynas...