Christine Neijstrom | The Lithuania Tribune
aA
The Lithuanian filmmaker who opened his tuxedo shirt to expose a Free Pussy Riot T-shirt when he walked the red carpet at the 2013 Moscow International Film Festival is unbuttoning again. On Monday Romas Zabarauskas revealed that he disrobed to finance his next feature length film, You Can’t Escape Lithuania. 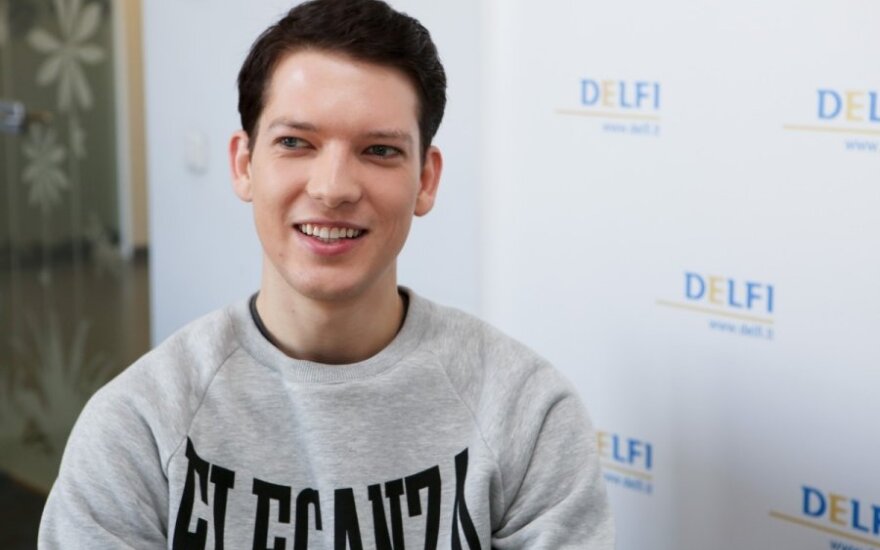 In a glossy video released November 2, Zabarauskas announced, “I am going naked for my film. So the more money you will send me, the more of my body you will see. And if we raise $20,000, I will send a signed picture of me, naked, to everyone who donated more than $50.”

Zabarauskas is not a newcomer to media attention or to developing crowdfunding campaigns to produce his movies.

“There’s no secret that this is a shameless publicity stunt to attract attention to my film and get it funded,” laughed Zabarauskas. He continued, “I’m young. I’m hot and I’ve been to the gym all year. We already did the photo shoot. It’s [the photo] professionally made and artistic. It’s not vulgar.

In addition to garnering almost $7,000 in four days, Zabarauskas’ self-proclaimed publicity stunt coyly bared the underbelly of public discomfort with his playful promise to fully reveal a gay man’s body.

The publication of his press release in several Lithuanian dailies was met with a slew of critical and anonymous comments.

Mouse-costumed comedian Algis Ramanauskas quickly aired a parody of Zabarauskas’ campaign in which he promised to undress for what he called “an even gayer” movie cast entirely of men.

“People are always talking about me but it doesn’t necessarily translate into money, into people sponsoring me, because it’s too controversial,” Zabarauskas said of the parody.

“This stunt is more meaningful because the film is about a fictional version of me. So it is an interesting game in terms of what this film is about. My character is not even a positive character in the end. So it’s a deeper discussion about representation. What limits representation? What limits the LGBT community? What limits LGBT rights? The film itself is a crazy egocentric project, so proposing my naked picture is part of that egocentrism, just another meta-level,” said Zabarauskas. 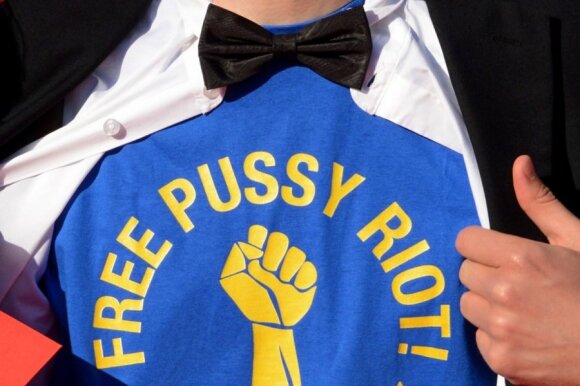 “Romas is asking what it is to be gay in Lithuania, in Eastern Europe. This film will be very open and about him and what it is to be him, or to be a fictional version of him; so, the picture--I saw it and for $50 it is a piece of art—is a nice trick, it is fun and ironic,” said Denisas Kolomyckis who has been cast to play the role of Zabarauskas in You Can’t Escape Lithuania.

Kolomyckis witnessed his character develop first-hand, “Romas was invited to be an artist-in-residence at the Raizvanduarda Cultural Association in Portugal, where I am working as the Artistic Director. Romas proposed to write the script for You Can’t Escape Lithuania. Romas used to work nonstop on the script, and by the end of the month, he wrote it.”

You Can’t Escape Lithuania’s lead actress, Irina Lavrinovic, believes the film will mobilise social change, “The campaign at this point becomes more of a social event. People, by supporting the project, can actually help Lithuania become a freer and more tolerant country.”

“There is a strong social concept embedded in the project itself. The movie, as an art piece, is supposed to be very experimental. In addition, some autobiographical elements in the storyboard leave a tricky feeling about what is real and what is not, where is fiction and where is reality. And finally, it is a rare thing these days that a Lithuanian movie deals with Lithuania as a theme, directly,” said Lavrinovic.

“Lithuania is what I know. I know this context best. I still want to stir things here. I want to speak to a Lithuanian audience and to have a representation of gay people on screen for a Lithuanian audience. Film is a magic institution. It is not a civic institution. It has its divine ways. When you have someone gay on screen you can establish your identity. We need more representations of gay people so that it will become a civic option to be one,” said Zabarauskas.

Zabarauskas is carefully cloaking the details of his script. He shared only a brief synopsis, “You Can’t Escape Lithuania is a feature film about a fictional version of Romas Zabarauskas (Denisas Kolomyckis), a gay filmmaker from Lithuania. Romas helps a good friend, an actress, Indre (Irina Lavrinovic), to escape Lithuania after she murders her mother and steals her money. Romas also takes his hot Mexican boyfriend Carlos along for the ride. On the road, Romas gives Indre an ultimatum: if she doesn’t agree to perform in one last experimental film, he will turn her over to the police.”

“We Will Riot was an attempt to do something more accessible, even if it was still my vision. With the new one, I'm giving myself full freedom - and it's exciting!” said Zabarauskas.

Christine Neijstrom is an unaffiliated and independent contributor to the Lithuania Tribune.