Fact and fiction in the founding legend of Vilnius

ldkistorija.lt
The founding myth of Vilnius has many affinities with legends of Rome and other great cities. Though hardly historically accurate, it was necessary to legitimize the royal seat of a medieval grand duke. 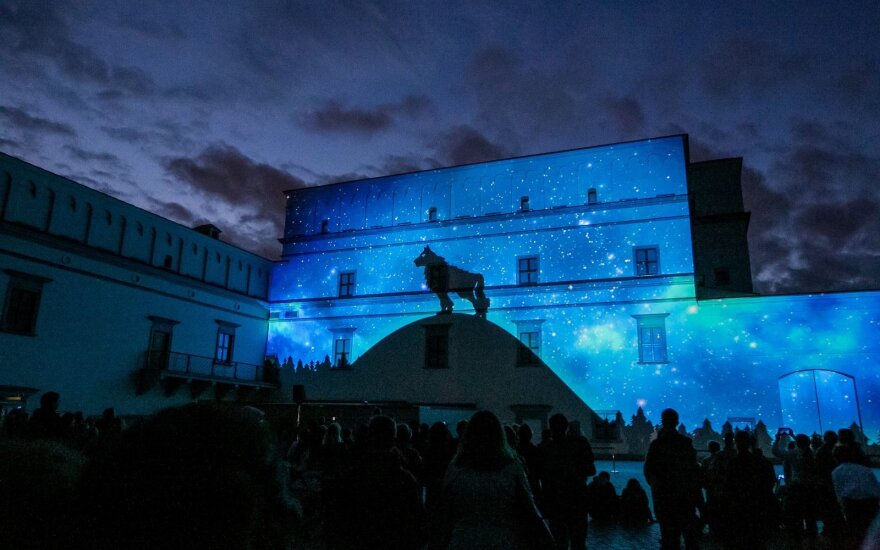 The legend of the founding of Vilnius is one of the most popular narratives of old Lithuania. It was first written down circa the 1520s in Lithuanian chronicles. The Bychowiec Chronicle gives the following account:

"Once, Grand Duke Gediminas left his capital of Kernavė to hunt five miles away, across the Neris River, where he came across a beautiful hill surrounded by oak woods and plains; he liked it very much and he set up his residence there, in the place of Old Trakai; and he moved his capital to Trakai.

"Soon afterwards, Grand Duke Gediminas left for a hunt four miles from Trakai; and he comes across a beautiful hill by the Vilnia river upon which he sees a great beast, a taurus, kills it on top of the hill which is called Taurakalnis (Taurus Hill) until this day. Since it was too late to return to Trakai, he stopped in the Valley of Šventaragis, where they used to burn the first dukes, and stayed to spend the night there. In his sleep he saw on the mountain, which used to be called the Crooked and is now known as the Bold, a great iron wolf howling like a hundred wolves.

"He woke up from sleep and turned to his priest who was named Lizdeika, because he was a foundling from an eagle's nest, 'I had a strange dream'. And he related everything he saw in his sleep.

The priest Lizdeika then said: 'Grand Duke, the iron wolf means that a capital city will be built here, and the howling means that the sound of its glory will resonate across the world.'

And so immediately the following day Grand Duke Gediminas sent for his people and set up one castle, the Lower Castle, in the Valley of Šventaragis, and another one on the Crooked Hill which is now known as the Bold Hill; and he called the castles Vilnius. He founded the city and moved his seat to Vilnius."

This legend was written down in the sixteenth century, so about 200 years after the events it related. The chroniclers fashioned the narrative after to the customs of their times: Grand Duke Gediminas most likely had not been using miles to describe distances. Moreover, Lizdeika is referred to as the high pagan priest.

The part about the sound of Vilnius resonating across the world reminds of the lines in Genesis that tell about the Tower of Babel. The similarity is hardly surprising, since the chroniclers were Christians.

The story about the three capital cities feeds into the archetype that is quite characteristic of the region. Recall the story in the Russian chronicles about the three centres of ancient Rus or the Polish narrative about moving the royal seat from Kruszwica to Gniezno and later to Krakow.

The Lithuanian chroniclers were familiar with the chronicles of Old Rus and with Maciej Miechowita's Polish Chronicle, so these similarities are hardly accidental, especially since they took over the cliché of the founding of castles during ducal hunting parties from the Galician–Volhynian Chronicle.

However, the Lithuanian narrative also bears the traces of old faiths and rituals. The historian of religion Mircea Eliade notes that when one needs a sign from gods, one can make it happen, often with the help of animals that can show a good site to build a temple or a settlement. Oftentimes, he notes, a party chases a wild beast and the place where they kill it becomes the site for a temple.

The narrative of Gediminas is more complex, though. After the Grand Duke hunts down a taurus, he spends the night at a sacred place, the field of Šventaragis, in waiting for a revelation. This is an age-old trope known to religious scholars as incubation (Gintaras Beresnevičius has written extensively about it).

It is found in many narratives. Aeneid, the epic of the founding of Rome, tells about King Latinus brining fleece of a hundred sacrificed rams to a sacred place and waiting there for the manifestation of Faun. Aeneas, the forebear of Romans, did not even need any special ritual - he fell asleep by the River Tiber and the river god Tiberinus appeared before him.

Prophetic dreams are a common trope in narratives about the founding and flowering of cities, states and empires. Rome, Prague, Kiev, Moscow, the Ottoman Empire are just some of them. The founding of Rome is probably the best-known story, especially the part about the twin brothers Romulus and Remus who were nursed by a she-wolf.

Some researchers note affinities between the she-wolf episode in the Roman founding myth and the iron wolf of Vilnius, but the link is probably indirect, since the iron wolf is a common image in folklores of Lithuanians and other peoples. Although the chroniclers, who also advocated the Roman origin myth for Lithuanians, were doubtlessly familiar with the Roman legend and must have been pleased with the similarity.

Religion scholar Beresnevičius has found interesting affinities between the story of Lizdeika, a foundling wizard who was found as a child in an eagle nest, with Siberian shaman stories.

According to the chronicle, Lizdeika was the high priest of the pagans. No one below this rank could probably be trusted to interpret the sovereign's dream. The pairing of a ruler and his wizard is a well-known trope, found most famously in Celtic myths about King Arthur and his wizard Merlin who, like Lizdeika, was closely linked to the forest (he grew up in the woods, according to the legend). Or recall the other famous "dream interpreter" Daniel who explained the dream of King Nebuchadnezzar.

Today, fact and fiction in old chronicles are near-impossible to tell apart with much certainty. Did Grand Duke Gediminas really had a dream and asked his priest to interpret it? Even if that did not happen literally, there could have been a ritual - perhaps a performance arranged with the priests - to mark the founding of a new city. It could have been embellished and turned into a legend that fits well with the first mention of Vilnius in 1323 - its conventional founding year - in the letters of Gediminas where he calls it "our royal seat", that is, the capital of Lithuania. The choice of a new residence and the moving of the royal seat to it needed to be "formalized". And the old religion served that purpose.

In fact, Gediminas moved his seat to Vilnius for perfectly rational reasons. It's strategic situation (suitable relief, on a confluence of two rivers) meant that Vilnius Upper Castle was a citadel, the only fortress in "Lithuania proper" that would not be taken by German knights. The choice would prove to be a wise one, since Kernavė was levelled to the ground during the invasions of the late fourteenth century, nor did Trakai withstand enemy attacks.

Gediminas' choice was down to a combination of military, political and economic reasons. The River Neris, suitable for navigation, would allow the city to grow. The settlement, which doubtlessly had been there before Gediminas moved his court, offered a supply of artisan items and staff for his royal household. As Lithuania was expanding into a big state, Gediminas was probably fashioning his royal seat after other European capitals.

Last week, Vilnius introduced the Good Coffee Map, a new guide to a handful of the city’s top...