Eurovision: What critics are saying about Lithuania's entry

„Lithuania Tribune“
aA
The Eurovision Song Contest kicks off on Tuesday with 18 performances in the first semi-final in Stockholm. Although Lithuania's Donny Montell is not performing his "I've Been Waiting For This Night" before Thursday, Eurovision fans are tuning in tonight to see with whom Donny (or Donatas Montvydas) may be competing with if he qualifies for the finals on Saturday. 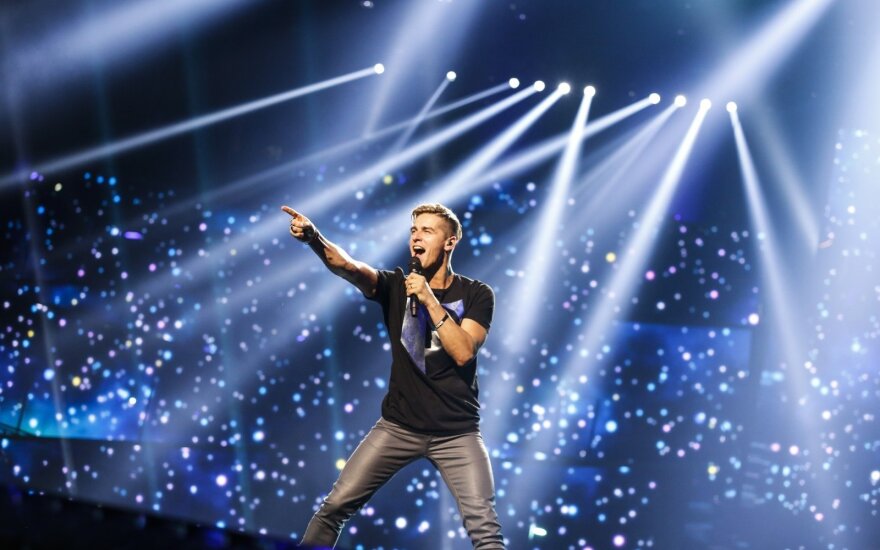 While bookmakers think Lithuania's chances of winning this year's Eurovision are slim, here is what some critics think about Donny's song.

Caroline Westbrook of Metro.co.uk compares the Lithuanian's current performance favourably to his previous go at Eurovision in 2012, believing he has a shot at qualifying for the finals:

"While Love Is Blind [Montell's previous Eurovision song] had a kind of pleasing disco quality, I’ve Been Waiting For This Night is altogether more bombastic, starting quietly and building to a big, stadium rock-style chorus – which basically sounds rather like Eurovision crossed with Coldplay (if such a thing were possible). All of which marks a big improvement on his 2012 effort. Well done that man."

Related articles
What are the odds of Lithuania's Donny Montell winning Eurovision?  (1)
Lithuania's last 8 Eurovision performances: Steadily in the middle

"Well Donny’s previous efforts on the Eurovision stage could well stand him in good stead here (after all he’s used to it already) and the song’s certainly catchy and commercial enough to pick up a few votes. While it doesn’t strike us as a likely winner, it shouldn’t have too much difficulty securing a place in the final – and who knows, we might just be seeing Lithuania on the left-hand side of the scoreboard again. Of course if they do finish higher than we confidently expect lots of wry one-liners about how they’ve been waiting for this night."

"This time he has bought a more contemporary dance floor banger that will surely be picked up by the fanboy press in May. It’s the sort of song that would do well at Melodifestivalen, so it comes as no surprise to see two Swedes leading the writing credits. Despite it being a fairly radio-friendly song, I can’t see Lithuania racing up the scoreboard in May unless they address the dire need for choreography.

"Donny fronted his song in 2012 and the feeling is he’s controlling the artistic direction again this year. Without choreography, Donny’s performance looks rather unrehearsed and lacks the professionalism and star-quality of artists like Saade, Loic Nottet, and more importantly, Sergey Lazerev. Hopefully rehearsals will see a marked improvement.

"Lithuania shouldn’t struggle to qualify from semi-final 2, but once in the final, 15th-20th looks about right provided there are improvements."

Oikotimes.com has this to say about Lithuania's entry:

"This is a strong pop song, with a familiar face. Donny represented his country in 2012. Our grown up boy looks like he has done his homework this time and is looking quite fresh… only problem is that this year we have too many pop songs – and he has no point of difference… He could of course pass to the finals if he dances naked with wolves but I think that idea is already taken. Good luck Donny."

But there's nothing like the British candour to tell you how it is. And according to Jess Denham at independent.co.uk:

"One Direction fans will likely fall for Donny and this soppy pop track about a girl’s smile lighting up his life etc. The rest of us, won’t."

What are the odds of Lithuania's Donny Montell winning Eurovision? (1)

Lithuanians are quite excited about their entry to this year's Eurovision Song Contest, but...

Lithuania is giving a go at impressing Eurovision fans for the 17th time this May. Take a look at...

Lithuania is taking part in the Eurovision Song Contest for the 17th time this year. Donny Montel's...

Lithuania has picked singer Donny Montell to represent the country at this year’s Eurovision Song...

"The Eurovision stage is too small for my talent and ambition. It is but a stepping stone on my way...