BNS
aA
Nijolė Sadūnaitė, 79-year-old nun, dissident and Soviet-era political prisoner, was awarded the Freedom Prize on the Day of Freedom Defenders at a solemn ceremony at the parliament on Saturday. 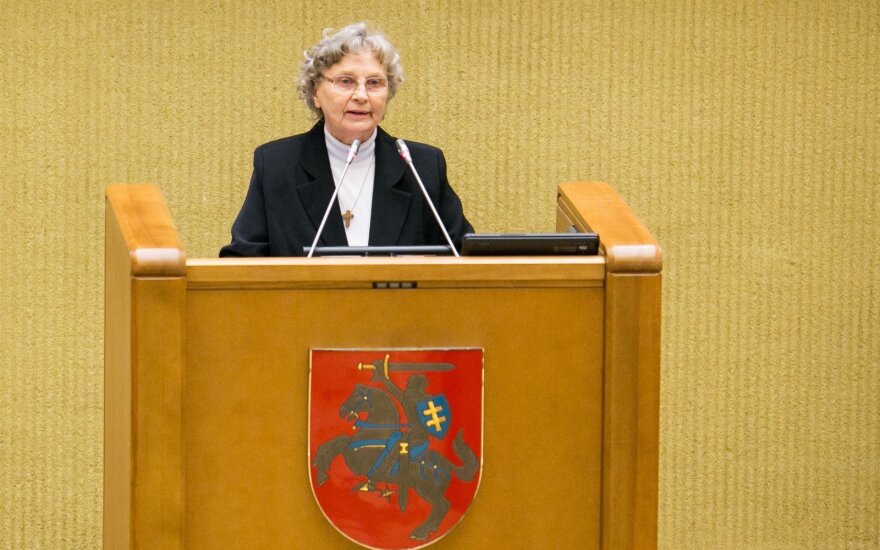 "I sided with the truth during the grim years of the occupation and I am doing my best to side with the truth in the free Lithuania. To achieve truth and justice, I am fighting for freedom from lies, from fear, from persecution of people with different thinking, from conformism and hipocricy," Sadūnaitė said after receipt of the state award.

The winner said today's Lithuania featured a lot of sores and injustice, dedicating most of her speech of the prominent so-called Kaunas pedophilia case. Sadūnaitė said that the state actions in the case violated the interests of the child victim. A few years ago, the girl was taken from her father's family and handed over to her mother amid protests of a huge crowd.

Lithuania's former president Valdas Adamkus said he was happy to see Sadūnaitė live long enough to see the country's freedom, at the same time wishing her "to keep the energy, openness and bite demonstrated in her speech."

In 1975, Sadunaite was convicted for copying and distribution of the Chronicles of the Lithuanian Catholic Church. Sadūnaitė, who became a nun right after school, was sentenced to three years in a labor colony and another three years of deportation.

Upon return to Lithuania, Sadūnaitė again actively joined the publishing of the Chronicles of the Lithuanian Catholic Church and was persecuted by the Soviet security.

On Aug. 23 of 1987, Sadūnaitė along with Antanas Terleckas, Vytautas Bogušis and Petras Cidzikas organized a protest rally at the monument to Adomas Mickevičius to commemorate the Ribbentrop-Molotov pact. After years of suppression, participants of the rally sang the Lithuanian national anthem for the first time in public.

In the Soviet-era Lithuania, Sadunaite was viewed as the most ardent enemy of the communist regime who had been targeted by the Soviet press and attempts of ideological press and a simple defilement campaign to compromise her life and work.

The Freedom Prize was established by the Seimas in 2011 to honor individuals and organizations for their role in defending freedom, democracy and human rights and promoting international cooperation for the cause of self-determination and sovereignty of Eastern and Central European nations.

Nijolė Sadūnaitė lives in a convent outside Vilnius and doesn't hear news very often, as she does...

The Lithuanian parliament decided on Thursday to award the Freedom Prize to Nijolė Sadūnaitė , a...

Opinion: A dissident's Lithuania – then and now

I heard the Lithuanian term for "prisoner of conscience" for the first time as a student at a...