Ludo Segers | the Lithuania Tribune
aA
Secret underground passages, hidden rooms, a nuclear bomb shelter in a theatre, an abandoned bank vault in a building dedicated to science; enough material to serve as backdrop for an intriguing movie. On a cold weekend in Vilnius, it was all part of a two-day opportunity to discover well-known and obscure buildings in and around the Lithuanian capital. 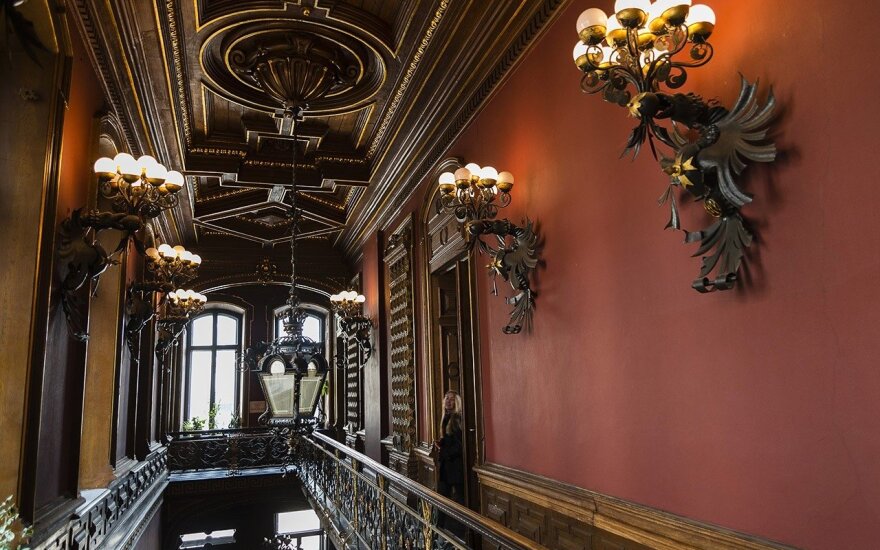 Eros and Thanatos, stairs at the Writers Union in Vilnius Photo © Ludo Segers @ The Lithuania Tribune

This was the second edition of 'Open House Vilnius'. A small army of enthusiastic, dedicated, and expert volunteers showed the ins and outs of some 40 of Vilnius' architectural gems. Many of the volunteer guides are students of architecture and real estate. They had spent months preparing to treat hundreds of visibly delighted visitors.

The in-depth knowledge of the guides allowed for discovering, and in some cases experiencing, these remarkable places. With 40 buildings open to the visitors, one had to carefully plan the weekend's architectural offering.

The Lithuanian Russian Drama Theatre on the corner of Basanavičiaus and Teatro Streets has been around for more than a century. The venue has seen many changes over the years. The place once offered 850 seats, over twice more than the present-day 400. The building saw many changes during its existence. A Polish theatre, an opera house (it had a small pit for the orchestra), a national drama theatre, and a youth theatre. Finally, 30 years ago it became the Lithuanian Russian Drama Theatre. It is slated to close soon for a major three-year renovation. 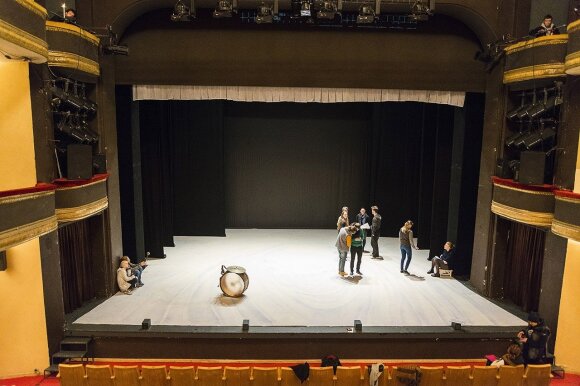 The building has remarkable acoustic qualities that could be experienced from an exclusive loge, once designated for important visitors, but now reserved for the staff attending performances. The guides showed various places behind and below the stage. Most surprising was to find a nuclear fall-out shelter dating back to the Cold War, equipped with gas masks and other protective gear, as well as a sheet to keep a record of hazardous measurements.

The Lithuanian Writers Union building near Gedimino Avenue has been the setting for various other activities, accommodating nobility and merchants before becoming what it is now, a gathering place for writers. In the process, it was designed and redesigned by six architects. The building has a striking beautiful exterior. Inside, the neo-baroque splendour with furnace mouldings, woodcarvings, and ceiling reliefs are a real feast for the eye. 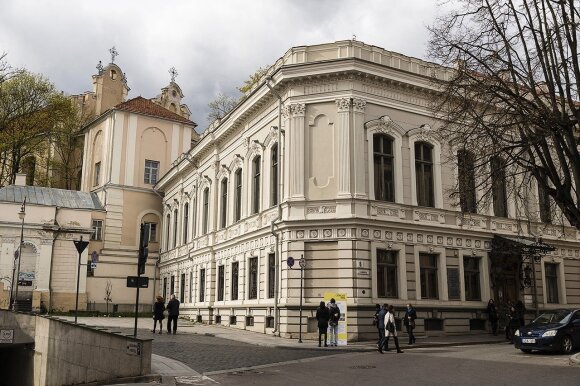 The building boasts a room with spectacular fireplaces, recently used as one of the settings for the BBC series 'War and Peace'. Many visitors were fascinated by a secret passageway that leads from the Union to the nearby church. We were told that the writers call the impressive main stairs Eros and Thanatos, for several love and death stories took place in the building. Clearly, this must be an inspiring place for any writer.

Almost across the street from the Writers Union, the Lithuanian National Drama Theatre is in many ways an example of understatement that took the first visitors by surprise when it opened in 1981. Most of the building reflected the moderation and serenity that are part of the building's reputations.

Before entering the building, visitors were welcomed by the watchful eyes of the “Festival of muses“, a brass sculpture by Stanislovas Kuzma. Once inside, they got a behind-the-scene tour generally reserved for actors and stage and light technicians. The prop room where scenes and props are prepared was a favourite as it allowed visitors to be queens or kings for a unique photo. A peculiar sight were several plaster busts of Lenin laying around as props for a recent theatre production. The huge doors to move decors in and out of the building were pretty impressive as they gave more scale to the behind-the-scene tour. 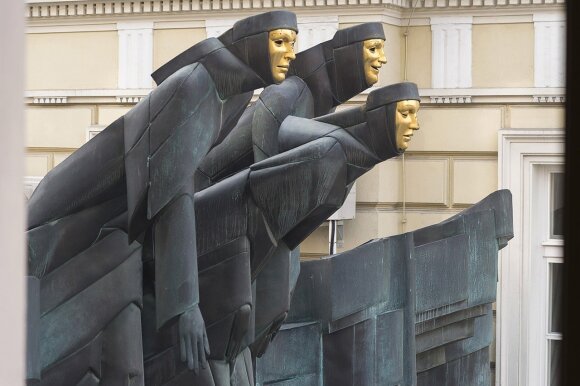 All of the rooms were sparsely decorated, without many details, ornaments and decorative elements distracting the visitor. Apparently, this is what the architects had in mind preparing the spectator for the drama performance. It is noteworthy that the theatre offers on occasion Lithuanian-language plays with English subtitles.

The Lithuanian Academy of Sciences is an early twentieth-century building, constructed in 1909 as a Russian bank. It was considered in those days as the most luxurious financial institution in Vilnius.

Everything in the building has a grand feeling to it, from the staircase at the entry to a conference with a ceiling of 440 m² without additional support. Sadly, as with several other buildings, the Soviets reduced the grand size to create a number of additional rooms. 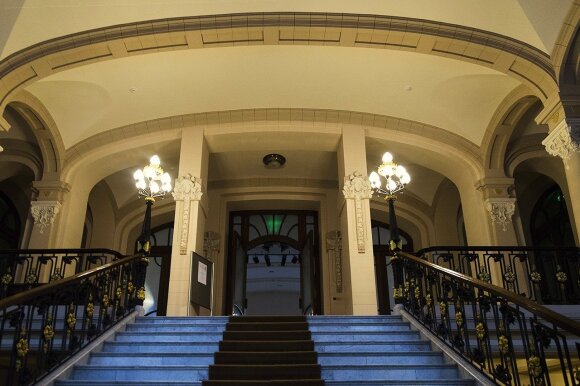 An ingenious ventilation system, well ahead of its time, ensured heating in the winter and cooling in the summer. Today, the building on Gedimino Avenue stands as the only testimony in Vilnius of a well-preserved authentic exterior and interior of that period.

Vilnius' glorious past as a business hub is very much represented in the Merchants' Club. This centenary building on Gedimino Avenue is a fine example of preserving the past and adapting it for the present, thanks to renovation just four years ago. Originally, build about 100 years ago, some of Vilnius most prosperous merchants would use the place to do business, entertain customers and their families. One of the first buildings to have electricity in the city, it had two generators to ensure that moving pictures could be screened without interruption. 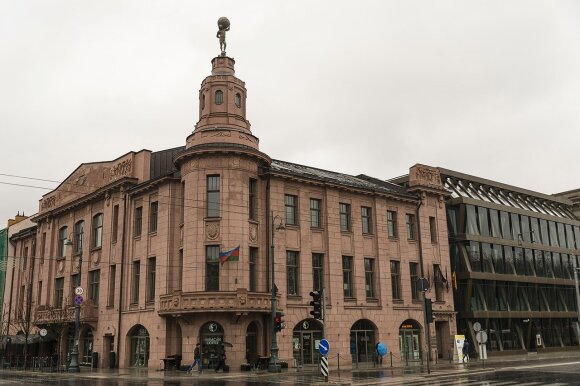 That same room still sports a bas-relief of Mercury looking down from the ceiling, two screens and the same sound system build into the walls, a revolutionary feature several generations ago. The architects in charge of the restoration preserved as many authentic features as possible, including decorations, the original shape and place of the rooms. A visitor can let their imagination run free and imagine what life was for a selected few just a century ago.

The tours were free of charge and open to everyone. Several of the popular buildings required registering in advance and were fully booked. Hopefully, there will be a third edition and those interested may already mark that in their calendar for next year.

Baltic pavilion in Venice to showcase architecture of shared aspiration

A development plan for the Oldtown of Vilnius has raised concerns among local residents fearing that...

On this day in 1323, Grand Duke Gediminas , the ruler of Lithuania at the time, wrote a letter that...

Historic and iconic buildings in Vilnius open their doors this weekend

This year again, Open House Vilnius invites all those interested in design and history to visit...