(2)
A conference on Holocaust education was held at Vilnius city hall on 17 April. The conference was the final event in the "Being a Jew" project's series of events this year marking Holocaust Remembrance Day. 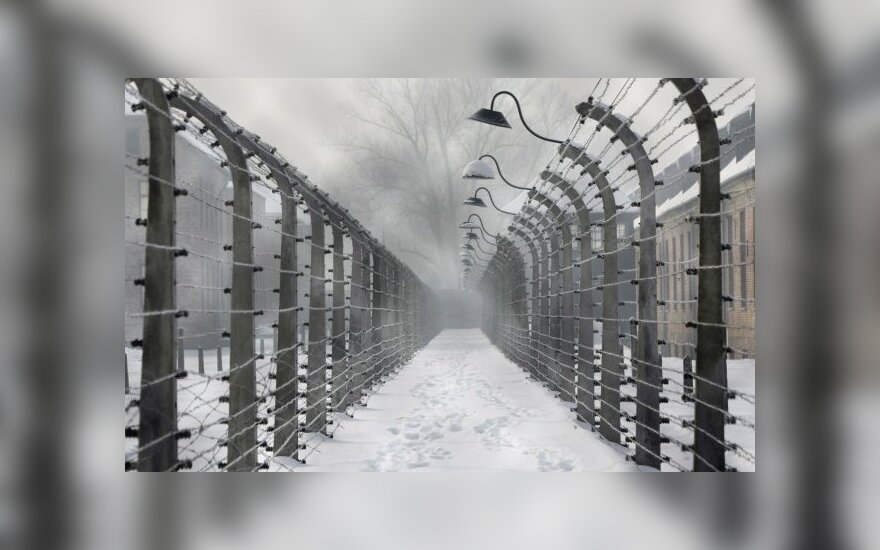 Writer Tomas Venclova, who authored a controversial article "Jews and Lithuanians" back in 1975, spoke about what has and what has not changed over the intervening 40 years.

"Officially it is agreed that the Holocaust is a great evil, a special day is allocated for remembering it, but at the same time there is the official attempt to justify and even canonize people who were complicit in the Holocaust. Commemorations and memorial plaques are also dedicated to them. So this should properly be called a form of national and state schizophrenia...

"The attitude spreads among us without utterance: we mark the Holocaust because the international situation demands it, but we mark our Lithuanian heroes of 1941 because our national honor demands it. In my opinion this demonstrates the quite pathetic state of thinking in our society,” Venclova told the audience inside the conference room at Vilnius city hall.

Venclova also heaped scorn upon the theory of a "Double Genocide", widespread throughout Lithuania.

Professor and Holocaust historian Saulius Sužiedėlis provided a litany of specific historical facts and figures showing the scope of the mass murder in Lithuania.

"The summer of 1941 was the very bloodiest page in the history of Lithuania. We shouldn't call it 'the tragedy of the Lithuanian Jews', but must call it instead the mass crime of the destruction of the Jews of Lithuania. A crime in which participated not hundreds, but thousands of Lithuanians. Unfortunately, this wasn't, as is often claimed, a small breakaway part of the nation, but included representatives of all the social strata. The participation of local collaborators and anti-Semites in the mass murder of the Jews during World War II aided Berlin's task to a remarkable degree," professor Saulius Sužiedėlis said in Lithuanian.

Dr. Dovid Katz of DefendingHistory.com listed what he believed were the main problems connected with the dominant view of the Holocaust in the Baltic countries.

"State-sponsored bodies in the Baltics are often obsessed with 'fixing the Holocaust', at least in the sense of equalizing the Holocaust with Soviet crimes to the point where there were two Holocausts — double genocide, 'equal evaluation of totalitarian regimes' — or none at all, 'complicated times when everyone was killing everyone'.

"The reasons behind such efforts include: 1) ultranationalism, wanting to have a perfect national record of victimhood, a nonsense when all nations on the planet have many stains in [their] past; 2) anti-Russianism, the rational and correct fear of the current unpredictable, aggressive, dictatorial bear of a country to the east combined with the irrational and incorrect idea that falsifying the Holocaust and World War II history is going to help matters; and finally 3) good old East European antisemitism, 'those Jews were all Communists, and got what they deserve — ah, but we love today’s Jews from America, the West and Israel'," Katz told the audience in Vilnius.

Dr. Efraim Zuroff, addressing the audience via prerecorded video, said: "There is no question that there was a nationalistic element to the commission of the horrible crimes of Holocaust in Lithuania. Yes, it is good to be a patriot. But there is such thing as too much patriotism, patriotism that motivates people to kill other people who are not of their ethnicity. These problems are not unique to Lithuania. These problems are endemic throughout the Baltics, in Ukraine, in Croatia, in Belarus, and they have to be faced honestly. Unfortunately, the failure to put a single Nazi criminal on trial was a very unfortunate failure, a failure that future generations of Lithuanians will very deeply regret, but it only means that the process will take longer. My hope is that the truth will finally be taught here and will be put into textbooks, into ceremonies, and the process of healing and reconciliation will begin, all of which will make the world a much better place."

Project organizer, producer and writer Rūta Vanagaitė told conference participants she undertook the project because Lithuanians still think of the Holocaust as a foreign tragedy, by far the majority of residents of Vilnius had never been to Ponar and also because when she was reading through case-files on political prisoners in her own family, she discovered evidence some of them were quite possibly involved in the Holocaust. "If there are such people in my family, then there surely are in other Lithuanian families as well. The time has come when it's no longer up to Jews to remind us of the dark passages in our history, but for us, for Lithuanians, to discover and judge the history of our families, our people and our country without beautification and decoration, without suppressing facts which make us uncomfortable," Rūta Vanagaitė explained.

Polish delegate Piotr Kowalik, a Holocaust educator from the Museum of the History of Polish Jews in Warsaw, summed up the significance of the Vilnius conference by calling it "a wonderful opportunity for Lithuania to begin a public discussion of her past, a discussion which, while painful, is necessary for making a better future."

Conference participants adopted an appeal to the ministers of education of the countries of Central and Eastern Europe, expressing concern over the state of Holocaust education in these countries and rejecting attempts to legitimize through legislation the so-called "history policy".