Creativity and boredom in a Lithuanian town coping with globalisation

Daiva Repečkaitė, LT Daily
aA
Having joined the eurozone this year and successfully advertised its natural and urban wonders, Lithuania has become a new darling of international travel 'listicles'. Its brushed-up capital, ambitious start-ups and emerging foodie hotspots make many visitors wonder if this is really one of the poorest countries in the European Union. Much of the country's hardships, however, have been cushioned by de-industrialised peripheral towns – like Alytus. Having lost most of its industries, the town is looking for new, global inspiration.
Sekite svarbiausias naujienas socialiniuose tinkluose! 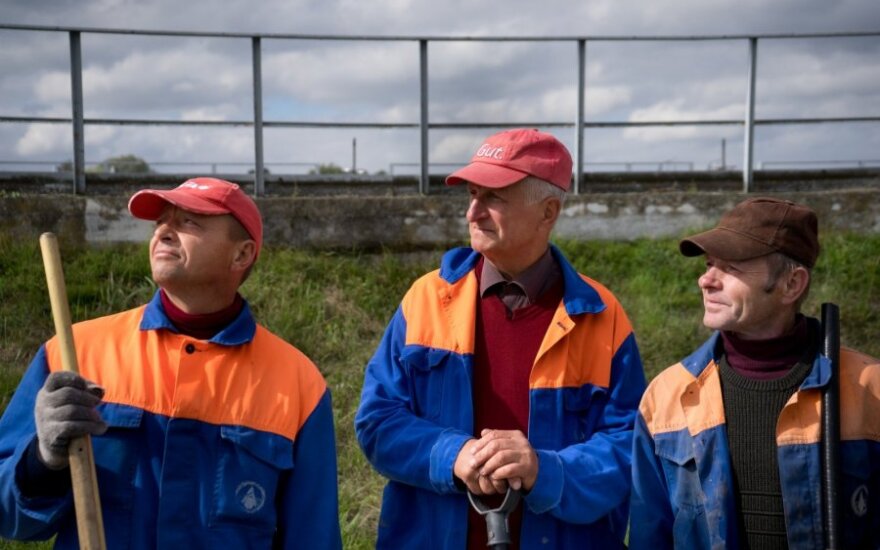 De-industrialisation was the most painful for older workers. The employment service has directed these men to do community service at the local water supplier (photo by Dalia Mikonytė)

“I feel good here because all my friends are here, but when I grow up, I'd rather move to a larger city. When I grow old, maybe I'll come back,” said Milda, an eleventh-grader in Lithuania's sixth-largest town, Alytus, as she tries to perfect her sketch at a local art school. She is well aware that students and young professionals flee to larger cities or other countries in search of better pay and a more exciting life.

Related articles
Employment in Lithuania up 0.2%
Essential provisions of the Law on the Legal Status of Aliens, which are favourable to foreign investors

Lithuania lost one-seventh of its young population (aged 14-29) during the crisis years (2009-2013) – the Department of Youth Affairs cites unemployment and low wages as the main reason. Alytus became an icon of globalisation challenges. At 19%, it has the highest unemployment rate in Lithuania. Since 2000, Alytus has lost wood, meat, milk and grain processing plants, several construction and transport companies, and a textiles factory that once employed 6,000 workers.

“The bankruptcies were the most painful to people who had worked in the same companies for 20 or 30 years and suddenly had to be retrained. Young people, on the other hand, are not afraid of changing themselves and their skills set,” said Jolanta Griškonienė, who leads the town's Youth Employment Centre. However, she is positive that the collapse of industry in Alytus has taught its youth “a lesson of flexibility and initiative”.

Kornelijus, who studies tourism and hotel administration in the UK, can cite statistical data about his town by heart. “It was once the third-youngest city,” he said, regretting this is no longer the case. “We have a good swimming pool and an amusement park; we will soon have the longest bicycle path in Europe, but we lack hotels, bars and clubs,” he said. He dreams of opening a 'normal' bar himself.

For Kornelijus and his friends, 'normal' means classy – not the kind where their less educated peers hang out. Yet they admit that without educated youth, such a bar would hardly survive. The demographic decline has halved the number of students at Alytus College – for aspiring entrepreneurs like Kornelijus this is not good news.

Nearly 60% of university students from Alytus region move to Vilnius. Major cities and towns are populated with practically oriented universities of applied science, which enable young people to study closer to home, but even among Alytus natives who choose this path, only one in four stays at home – unlike in larger towns. “They are compensating the decline of local enrollment by attracting foreigners,” said Ditė, who studies in Vilnius and only returns to Alytus for short visits. She likes Alytus, but it is not where she would build her future. 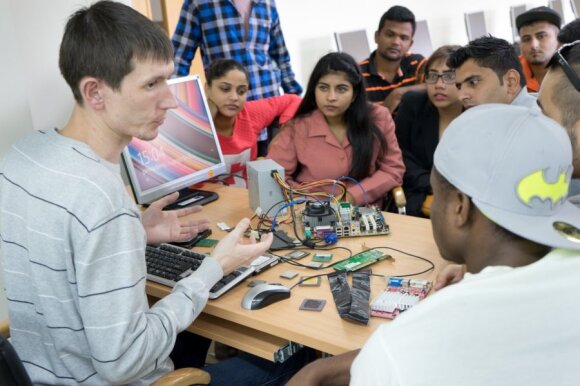 Teachers are like our parents,” says Anmol from India, who came to Alytus together with her cousin (photo by Dalia Mikonytė)

Yet Alytus has rather unlikely new patriots. “I like it here so much that I would like to study here myself. Their learning is very practical,” said Nargiz Ismayilova from Azerbaijan, enchanted, as she observed how her son Polad was learning to assemble a computer at Alytus College. “He will learn the skills on demand – vehicle diagnostic, lasers and website design. He can integrate anywhere,” she said. Polad is studying information technologies in English, and his classmates come from India, Nigeria and DR Congo.

Alytus College has become an island of diversity, as demographic decline pressures local schools to look for alternative ways to survive. “Alytus is my second home now. I'd love to stay here. There is everything I need, and I prefer it to more crowded cities,” says Harsimrat from India. Enrollment Manager Irena Ivanauskienė proudly tells of how her students, whom she knows by name, get involved in the local community, “Our Congolese students also play in the local school's band.”

“It is very peaceful here, there is no racist issue,” said Kayode, who came to Alytus from Nigeria. He would like to return to his country for work, but his co-nationals in the Business Management programme would rather stay. They regret that Lithuanian laws regulating residence permits for non-EU nationals are strict.

Attracting fee-paying students like Harsimrat and Kayode is a survival strategy for peripheral educational institutions. India and Nigeria are already among top-five 'sending' countries for foreign students in Lithuania, who still amount to less than 6% of all students. Three times more Lithuanians go to study abroad. According to the Study in Lithuania agency, full tuition fees at Lithuanian universities range from €1,000 to €8,300.

“One must adjust to the cultural differences, for example, that students are late for classes or can't understand assignments,” admits associate professor Rita Petrauskienė, who strives to bring her multinational class to a common standard. Despite the challenges, the newly gained international popularity of the college sustains academic jobs like hers. Once there, international students also need dormitories, coordinators, and translators.

“In Alytus [Africans] can feel at home. Vilnius is like a caricature of London, but Alytus is more like Africa,” jokes Redas Diržys, the principal of Alytus Art School, who is trying, in his words, to educate free thinkers in his home town. “I want [foreigners] to create something authentic around themselves, to be themselves rather than integrate,” he said.

On the main square of Alytus, the walls of the local theater, an imposing building, are full with posters of upcoming shows. Giant chess are waiting for enthusiasts. Smooth sidewalks are ready for cyclists, and local cafes are half-empty. Residents may be overflowing with creativity, but healing the wounds of industrial collapse takes a long time.

Employment in Lithuania up 0.2%

In the third quarter of 2015, the employment growth rate in Lithuania was 0.2% compared with the...

Essential provisions of the Law on the Legal Status of Aliens, which are favourable to foreign investors

Amendments to the Law on the Legal Status of Aliens, that came into force at the beginning of 2017,...