BNS, ELTA
Nine special information stands to mark the 25th anniversary of the Baltic Way have been unveiled near the roads Vilnius-Panevėžys and Panevėžys-Pasvalys-Riga in Lithuania on Friday. 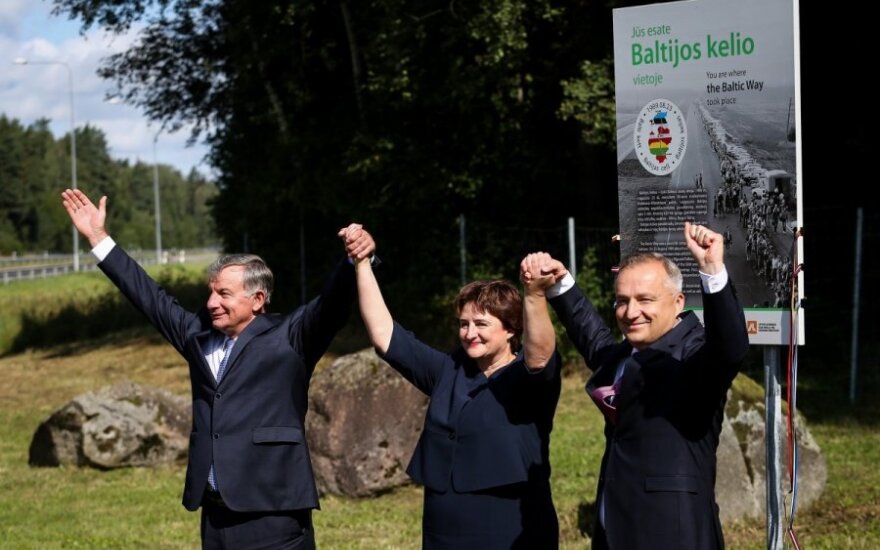 The stands were installed at drivers' rest areas.

Speaker of the Lithuanian Seimas Loreta Graužinienė and Minister of Transport and Communications Rimantas Sinkevičius attended the unveiling of one of the stands.

"25 years ago, a live chain of people joined Vilnius, Riga and Tallinn. From the youngest to the eldest, two million people in Lithuania, Latvia and Estonia joined their hands to show the world their unity and wish of the Baltic States to be free. Let us never forger that wonderful feeling of unity and togetherness," Graužinienė said.

All in all, 23 information stands have been installed in the Baltic states, including 10 in Latvia and 4 in Estonia.

On 23 August 1989, the Baltic nations expressed their resolute determination and will to be free and restore the independence of their states. About two million people joined hands in a live human chain stretching 620 kilometres from Vilnius through Riga to Tallinn. The peaceful rally drew the attention of the world. In 2009, the Baltic Way was included in the UNESCO international register “Memory of the World”.

The 25th Anniversary of the Baltic Way will be commemorated on Saturday, President Dalia Grybauskaite will attend official events and the solemn flag raising ceremony of the three Baltic states in Vilnius Cathedral Square.

"The Baltic Way is a living legend. Twenty five years ago, all three Baltic nations unanimously and boldly declared that they would strive for freedom. We showed the world that the occupants had not broken us. We restored our states and made a huge progress, therefore let us be proud of our history. Let freedom echo from Vilnius to Tallinn," said the president.

According to the president, today Europe once again faces brutal force and candid intentions to destroy aspirations of a mature and sovereign state. The situation in Ukraine calls for the same unity, courage and resolve shown by people who stood in the Baltic Way.

On Saturday, Lithuania, Latvia and Estonia are going to mark the historic anniversary. The president will see off participants of the Baltic Way in Vilnius Cathedral Square, she will also inscribe her wishes to Lithuania and future generations.

At noon, near the White Bridge in Vilnius, President Grybauskaitė will announce the civic initiatives' day "Lithuania is What You and I Are" (Koks tu ir aš - tokia ir Lietuva). Seeking to demonstrate solidarity with Ukraine and mark its Independence Day, school students will form a heart formed from the colours of the Ukrainian flag.

In the evening, the president will attend a solemn Baltic states flags' raising ceremony.

Opinion: The Baltic Way, a policy of memory and cooperation (1)

I have to confess, that generally, I don’t like the term “ Baltic States .” This term references...