David van Roon, the Lithuania Tribune
aA
The first screening of the BBC’s War & Peace in Vilnius this Saturday saw some of the heavy hitters of the Lithuanian film and culture industry mingle with the British BBC crew. With the BBC having shot this major production in Lithuania and the implementation of new tax incentives, the country’s film industry is seeing a surge. 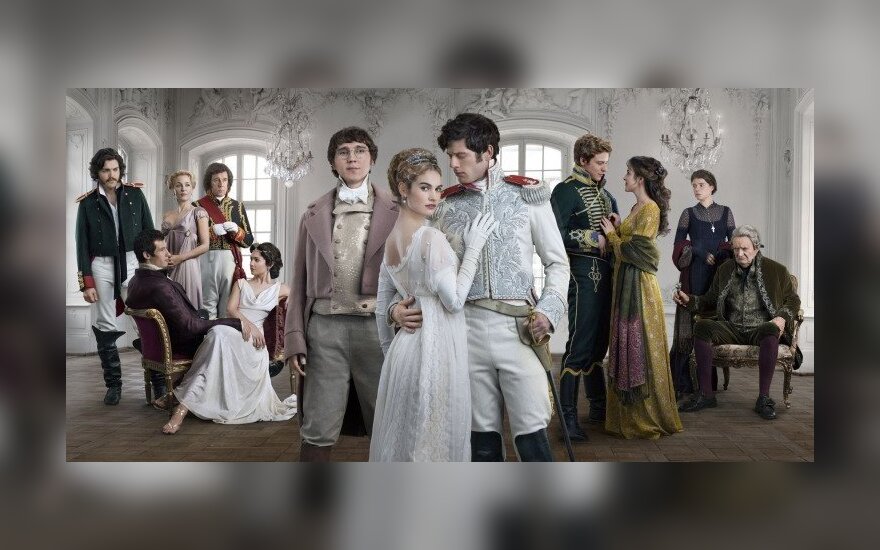 The cast of BBC's War and Peace

Some 500 Lithuanian cast, crew and other people who worked on War & Peace attended the screening of the first two episodes at Forum Cinemas Vingis. For most of them, it was the first time they saw the series. The adaptation of Tolstoy’s epic has been lauded by critics and the public alike in the UK since its first episode aired there earlier this month.

Twenty BBC crew members, amongst them director Tom Harper, flew to Vilnius especially for the Lithuanian premiere. Over the six months of filming, the crew had lived in apartments throughout Vilnius. ’It is a bit like returning home,’ said Harper. ‘There is a whole lot of places we’d regularly go. Places to get food, places where we’d get a drink, places where we’d film. It’s great to see these all again.’

Related articles
War and Peace director Tom Harper: ‘I felt like an army general myself, but with less severe consequences’
Funding for Lithuanian filmmakers to increase in 2016  (2)

Before the screening commenced, Tom Harper and producer Julia Stannard took the stage and thanked the people who had filled up the theatre, for their help and support. Harper said War & Peace was the ‘largest project I’ve ever worked on. I want to thank the crew here, because without them I couldn't have done it.’ Stannard added that those gathered in the theatre formed the most passionate and talented group of people she had worked with.

The Lithuanian film industry already has seen a surge since the news of War & Peace being shot in Lithuania was made public earlier last year. One of the many points of consideration for film teams in choosing a location is the tax structure in that country. With a new income tax law amendment that the Seimas voted on three years ago, Lithuania now has more favourable conditions for filmmaking. Figuring out the tax incentives for War & Peace still was hard work for the team at Baltic Film Services, but the success has created a precedent for future productions to be started here.

The audience watched the screening breathlessly, recognising many of the scenes they had worked on as well as places they lived in and walked through. It was only at the end of the second episode that the crowd burst into applause. A reception followed where the BBC crew mingled with the Lithuanian crew, costume makers and the likes of Minster of Culture Šarūnas Birutis and former mayor of Vilnius Artūras Zuokas. Some of the other attendants included Director of the Lithuanian Film Center Rolandas Kvietkauskas, set designer Aleksandra Jacovskytė and multiple producers from Baltic Film Services.

Tax incentives were an important reason why the BBC chose Lithuania as a base for the shooting of War & Peace. It was, however, not the only reason, explained Harper. “It wasn’t any one particular thing that made us choose Lithuania. It was the combined effect of many different factors that made us see this was the right location.” Harper went on stating that he was very much impressed by the Lithuanian crew and in particular the costumes’ department. All of the costumes seen in the series are made by Lithuanian seamstresses and tailors.

War & Peace, with a budget of 21 million euros, is the most costly BBC production yet. About 7 million was spent directly in Lithuania. The six-part series will start to air here at the end of January.

Funding for Lithuanian filmmakers to increase in 2016 (2)

The Lithuanian Film Centre is set to increase its funding and support for Lithuanian filmmakers to...