Bugatti car riding through the streets of interwar Vilnius

Ričardas Žičkus,
DELFI EN
aA
A Bugatti car, riding through the streets of Vilnius, undoubtedly attracts attention of the passers-by. Automobiles made by Ettore Bugatti have always been appealing technically and aesthetically. Interestingly enough, people could see a Bugatti in Vilnius 80 years ago. 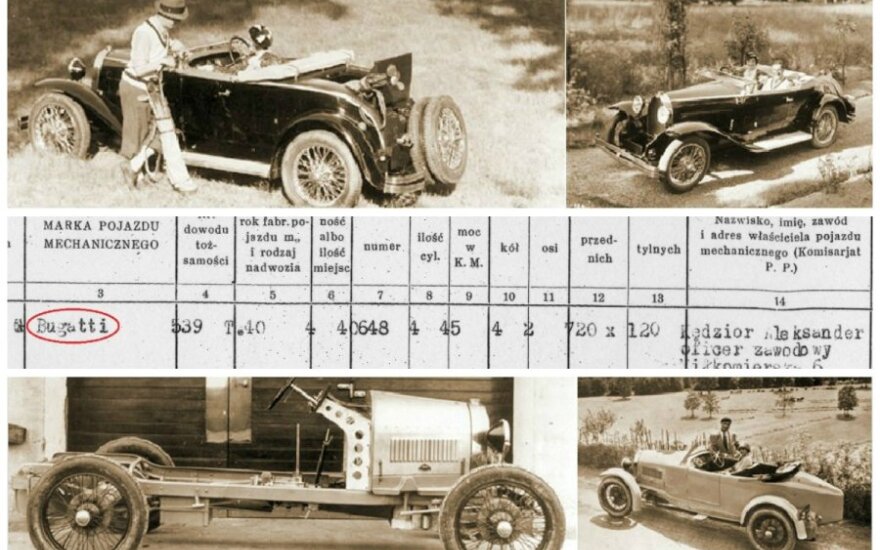 While I was looking for some information about the automobiles of the inter-war period in the Lithuanian Central State Archives, I came upon a document named “Bugatti”. Although I have been interested in the history of cars for a year now, I was still very surprised. I went through every single line written in that document: it turns out that in 1935, a Bugatti Type 40 with an engine number 40468 passed a technical inspection in Vilnius. At that time there were only 259 automobiles registered in Vilnius.

In the mid 1920s, automobiles created and produced by designer and manufacturer Ettore Bugatti became famous for their sporting success (e.g., Bugatti Type 35, the most successful racing model) and remarkable design. Bugatti cars were never mass produced, unlike Ford, Chevrolet or Citroen. Ettore Bugatti devoted most of his attention to sporting and Gran Turismo type cars. Also, he never forgot his luxurious customers, to whom he designed cars with different sized motors. All in all, those were expensive cars.

So, what was the Bugatti Type 40, produced from 1926 to 1930, like? According to the information from the Lithuanian Central State Archives, it was a four-seater car. This means it was not a sporting, but rather a Gran Turismo type of car. The Bugatti which was riding in Vilnius had a four-cylinder, four-stroke engine with a displacement of 1496 cc.The engine was an SOHC design and produced 45 hp (at 4500 rpm).

Who owned this car? At first I thought it belonged to an extraordinary resident of Vilnius. The name in the document was Kedzior Aleksander, who lived at Ukmergės 6 and kept his car in a garage across the street at Ukmergės 5. When I looked him up on the Internet, I found him to be a high-ranking officer of the Polish Army, the leader of an artillery division in Vilnius. In 1937, he became a military attaché of the Republic of Poland in Spain and probably left Vilnius to pursue his new position riding Bugatti T 40.

There are no pictures of the actual automobile, so I am enclosing some images from online sources to help imagine how similar cars looked back then.

Ričardas Žičkus is the transport curator at the Museum of Energy and Technology.