(1)
Vaidotas Žukas
aA
Small wooden eggs brought by Bishop Matulionis to his nieces as souvenirs from abroad, Christmas decorations cut out from paper by him, an intricate double altar also made by the bishop, his embroidered initials on the surplices and the jacket lining. 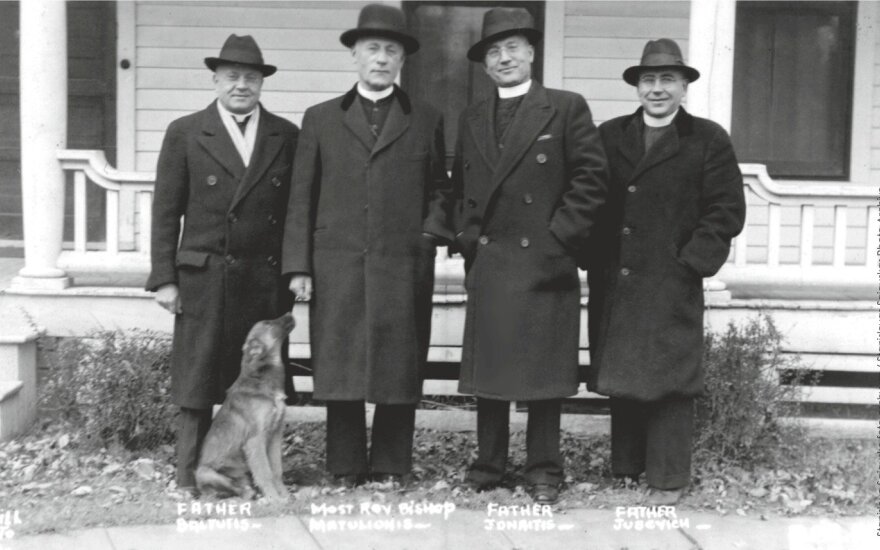 The photos are courtesy of Prof. Stanislovas Sajauskas and Eugenijus Peikštenis, the closest relatives of Blessed Teofilius Matulionis, and the Lithuanian Central State Archives (LCSA). For example, there is a large photograph from the LCSA, in which all the Lithuanian political and church elite of the time inspects the Eucharistic Congress parade in Kaunas on July 1, 1934 from the stairs of St. Michael the Archangel Church. Everybody with a little knowledge of the inter-war history and the ability to decode the arrangement of people in the photograph, will see how poor were the relations between President Antanas Smetona and the Lithuanian Church, between the Lithuanian State and the Holy See, as Nuncio Antonio Arata was seated farthest from the president and the archbishop of Kaunas – next to Bishop Matulionis who had just returned from his imprisonment in Soviet Russia.

The exhibit also features inter-war postcards sent by Teofilius Matulionis to his relatives from Berlin, Alexandria, Rome, letters he sent from the prisons of Orsha and Vladimir (1947-1953) with many cross-outs by the prison censors, letters written in Lithuanian at the Special purpose institution – Potma Home for the Disabled in Mordovia ASSR (1953-1956), after the death of Stalin and the bishop's amnesty.

Teofilius Matulionis did not write his letters in standard Lithuanian (and it is amazing!). He wrote in the Aukštaitian dialect and included many words borrowed from Latvian and Russian. Errors of a holy man are just as holy and should by no means be corrected.

The exhibition Unarmed Truth features a few small but fancy exhibits, given to Bishop Teofilius Matulionis after his return to Lithuania from imprisonment in Soviet prisons and labor camps in 1933 or brought back from his trip to America in 1934-1936.

All these prayer notes and ribbons travelled in the bishop's luggage around United States and across the Atlantic Ocean, were brought back to Kaunas in 1937 and remained there during the first Soviet occupation. Finally, when Teofilius became bishop of the diocese, they were taken to Kaišiadorys where they stayed until his return from deportation in 1956. They were not found during the KGB searches in Birštonas and Šeduva after bishop Matulionis' death in 1962, and spent another 55 years in the private archive of his niece Marija Bendoraitiene. Until this year.

The exhibition Blessed Teofilius Matulionis – Unarmed Truth at the LFI's House of Perkūnas in Kaunas will be open from May 4 until the beatification ceremony on June 25.