Ludo Segers | the Lithuania Tribune
aA
A group of young people going on an art discovery trip through Vilnius on a rainy October day. Perhaps a regular sight in Lithuania's capital, but this was one with a difference. "Art in my town", was for deaf and blind people, a group all too often marginalised in society. 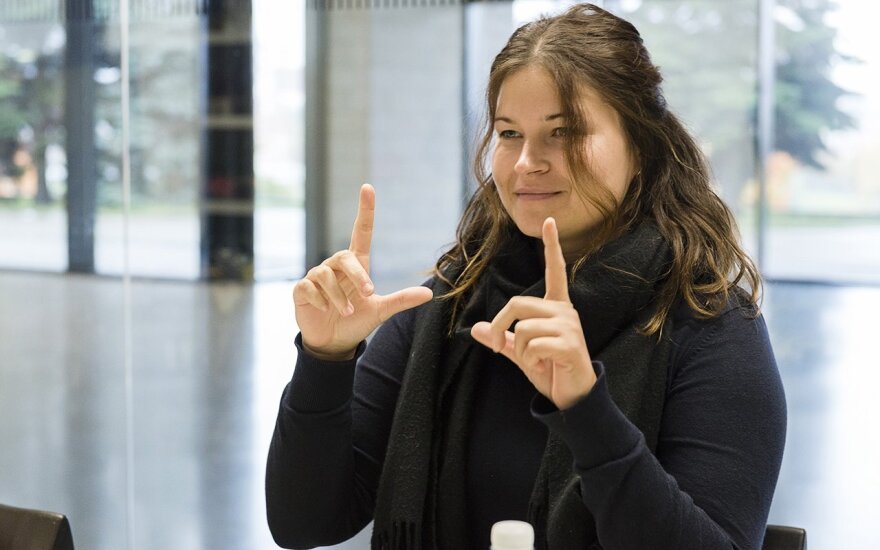 The project, the brainchild of Magdalena Verseckas of Surdologios centras, was different in that participants were actively involved in the workshops, being able to touch and smell. In the first part the participants learned new aspects of artworks by having direct contact with the sculptures in Vilnius and Kaunas. Using all their senses, they learned to appreciate the creative process and explore materials, textures and the environment, through the movement the participants experienced forms, analysed emotions and were able to share their experience.

In the second part of the workshops, the participants got some hands-on experience and saw their creativity turned into the creation of their own pieces of art. The participants loved this experience, in particular, and inquired about more of these workshops in the future. The hands-on workshops took place in the National Gallery of Art (NGA) on the right bank of the Neris.

At the NGA, Eglė Nedzinskaitė, curator of educational programs, said, ''The project "Art in my city" empowers deaf and blind people to feel as citizens of the city: not only to discover the art in the city, but also to think how to make public spaces more of them own.'' She added, ''during the workshop, the participants engaged in a discussion about the art in public spaces of the city, and their suggestions. These are models are worth paying attention to, if we want public spaces to become friendlier for the citizens of various needs''. A very topical issue indeed, not just for city planners.

Magdalena Verseckas of Surdologios centras, the developer and manager of the project was visibly pleased with the cooperation with the NGA. She said, ''I'm very happy to have had the cooperation with Eglė Nedzinskaitė and Povilas Šnaras, educators at the National Gallery of Art.'' She added, ''They are so creative and they love what they do and this makes their creative art workshops so attractive for participants''.

Asta Zinkievičūtė and Anastasija Zimina, the sign interpreters were also pleased with their role in this project. This was different from most of their daily activity. ''It was a practical oriented activity, making the story about sculptures and monuments coming alive'', said Ms Zinkievičiūtė. She added, 'Making art accessible and interesting for the participants in spite of being challenged with some of their senses.'' The project, created by Surdologijos centras in cooperation with National Art Gallery was partially financed by the Lithuanian Cultural Ministry saw a series of six creative workshops in Vilnius and Kaunas organised for deaf persons. There were three groups of seniors, one for youth, and another one for children. In addition, there was also a workshop organised for blind youth.