the Lithuania Tribune
aA
An estimated 300 ultra-nationalists marched in Kaunas on Independence Day chanting anti-refugee slogans and celebrating what Jewish groups say are Nazi-collaborators who were leading Lithuanian figures in the interwar period. 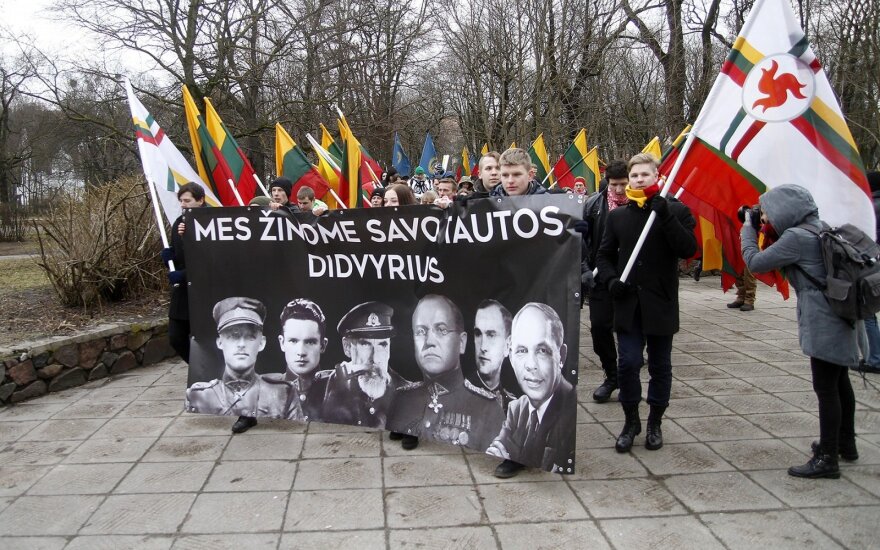 The marchers' key slogan was “Lithuania is ours” and some carried a poster showing key Lithuanian interwar political and military figures with a slogan “we know who our heroes are”. In a statement released before the march, the organizers said the event would "pay tribute to Lithuanian heroes who are constantly smeared by enemies of Lithuania".

Jewish commentators described the marchers as neo-Nazis because the interwar Lithuanian figures that the marchers claimed are national heroes they said were proven Nazi collaborators.

The march was met by a number counter-protesters, some of whom were members of anti-neo-Nazi organisation Antifa Lithuania, holding a placard saying “Lithuania is not the Third Reich”.

"The slogan of the march is 'Lithuania is ours', since we can see a complicated geopolitical situation, a complicated situation in the EU which is essentially on the brink of disintegration. Hordes of hungry and angry migrants are knocking on the gate. So we want to note that Lithuania is the home of our nation, a piece of land we have to respect, love, and fight for," said Julius Panka, the leader of the Lithuanian National Youth Union.

Talking about the supposed threat that refugees posed to Lithuania, Panka said that "rapists" and "idlers" would not be allowed to enter the country. Later, the marchers performed a small scene showing migrants enslaving locals.

The march was heavily policed all along the route to the Kaunas Historical Presidential Palace in the Old Town. The march ended in laying flowers at the monument to former President Antanas Smetona.

The march was observed the famous Nazi hunter Efraim Zuroff and Jewish Yiddish philologist David Katz to express their disapproval of it.

The Jewish community’s umbrella organization in Lithuania did not make any public statements regarding Tuesday’s events, leading Zuroff to criticize the group, with which he has previously engaged in several public clashes.

In a February 16 op-ed in The Jerusalem Post, Zuroff explained that while these marches were initially held in a “blatantly anti-Semitic” manner, in recent years the “anti-Semitic content [has been] far more subtle... around the issue of Lithuanian complicity in the Holocaust, which the nationalists persistently refuse to acknowledge.”

“There were the usual nationalistic slogans and they announced that they are honouring the heroes of Lithuania who are being discredited by the enemies” of their country, Zuroff said. “All of those are people who murdered Jews during the Holocaust,” he said.

The issue of Lithuanian complicity in the genocide of its Jewish population has been a topic of intense public debate across the country in recent weeks following the publication of the book, Our Own: Journey With an Enemy, written by local author Ruta Vanagaitė and Zuroff.