(1)
BNS
aA
Staff members of the Lithuanian Special Archives have found another original copy of the Declaration of the Council of the Movement of the Struggle for Freedom of Lithuania, signed on Feb 16, 1949, while looking through recently received new documents of Lithuanian freedom fighters. 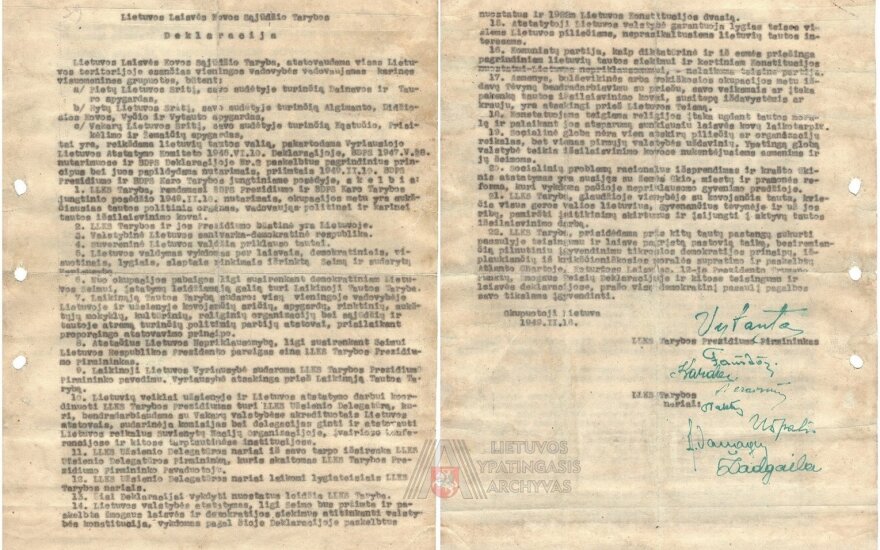 The discovered document is the declaration's machine-typed carbon copy and the text is identical to the other original text kept at the Lithuanian Special Archives, with only the arrangement being different.

"The signatures are original, so it's obvious that more than one copy was printed and signed," the Lithuanian Special Archives said in a statement.

Up until now, the only known original copy of the declaration was included into the Lithuanian national list of UNESCO's Memory of the World Register.

On Feb 16, 1949, the Council of the Movement of the Struggle for Freedom of Lithuania, which led the armed resistance to the Soviet occupation since 1949, signed the declaration expressing the will of the Lithuanian nation to restore an independent democratic state.

A total of around 4,000 pages of various documents of Lithuanian partisan units were found and handed over to the archive by a private person in late 2019.

All Lithuania has celebrated its national day on February 16 . On this occasion we would like to...

The Los Angeles International Airport in the US will light up in the colors of the Lithuanian flag for...

In the twentieth century, most of Lithuania underwent seven currency changes, not counting a stretch...