aA
"American Songbirds“ is a project of seven musicians which will finish European tour in Lithuania. 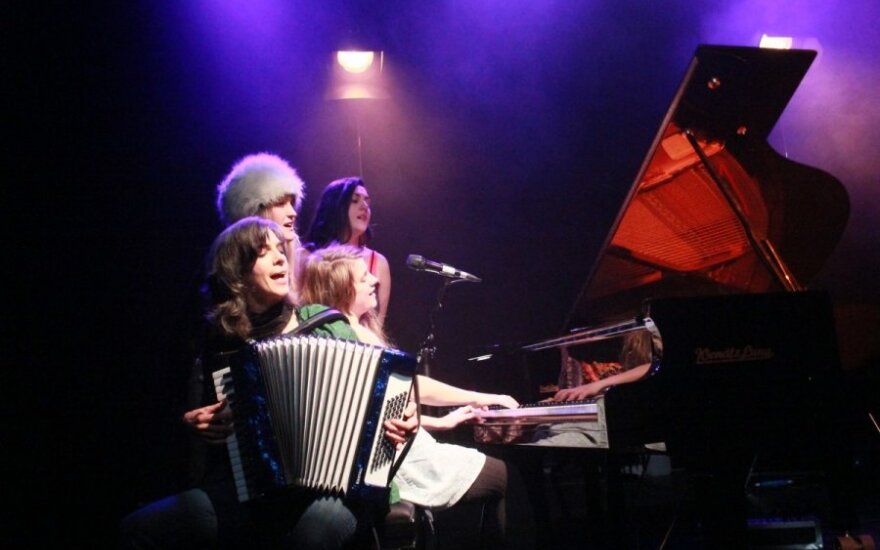 No continent has influenced the tradition of singer-songwriters like North America.

“American Songbirds” offers listeners the chance to discover four wonderful new singer-song-writers. Each of them have their own distinctive styles, and accompany themselves on diverse instruments (cello, accordion, piano, claviola,and guitar) in four 35-minute sets. The songbirds whisper, sigh, growl, and cry their feelings into the microphone: beguiling, fascinating, and beckoning the listener into their separate musical worlds. Discover our four songbirds:
Ashia & Bison Roug, Rachelle Garniez, Kyrie Kristmanson and Daisy Chapman.

This beautiful woman presents an entire world of sounds and voices, which she melds, with her cello, into a kaleidoscope of songs.

All this is carried by a voice, which can effortlessly glide from dramatic depths, to a throaty alto, to a heavenly-soaring soprano. In her net, she catches every listener with her mix of cabaret-like sassiness, diva lyricism and playful chanson. In the US, Ashia belongs to the league of closely-watched younger talents like Joanna Newsom, Regina Spector, and Amanda Palmer, who are mentioned for their mix elements of Classical and Pop. Ashia has performed with Cirque du Soleil.

Rachelle Garniez is described as “another kind of Diva”, and as a “certified free spirit” by Billboard Magazine and The New Yorker magazine. “Romantic, rhapsodic, and occasionally very funny” The New York Times describes her unique, lyrical, and melodic story-songs. Through the years, she’s played with a wide variety of bands: Rock, Blues, Country, Latin, Klezmer, Jazz and Tin-Pan-Alley classics. Her unparalleled feel for the song proceeds from all these influences, and “wanders through the genres, leaving sweet ruins in her wake (The New Yorker). Rachelle already has 5 CDs published under her own label Real Cool Records, in the USA. In 2009 she recorded “My House of Peace” as a single, published by Jack White on his Third Man Records label.

Kyrie writes and sings her own songs accompanying herself on guitar. These songs have been described by Canadian music experts as “unusual and unique” and “refreshing and engaging”.

Her songs are influenced by contemporary Folk, Medieval music, as well as Pop and Jazz, yet they transcend all categories. According to the Canadian music magazine “Exclaim!” she “answers the question of how Bjork would sound if she were a swamp-boogie queen with a jazz upbringing”. She has enchanted audiences at the London Jazz Festival, as well as support for Emily Loizeau and Sophie Hunger, among many others. Her recordings feature spare acoustic guitar, chirping crickets, and filigree percussive elements. A breezy jazz trumpet delivers the smart accessory to the perky singer, who delights in philosophizing on the beauties of Nature, mysticism and spirits.

Daisy has proved herself as a talented and shrewd songwriter in demand. Two albums have been recorded by renowned producer Ali Chant at Toybox Studios (PJ Harvey, Gruff Giant Sand) including her latest release, “Shameless Winter”.

Daisy’s powerful vocals have been used by the likes of John Parish, for his film work, as well as a handful of TV session work. Her piano style and versatility was noticed by UK prog rockers Crippled Black Phoenix, and for two years Daisy travelled as pianist/BVs with the band on tours covering every corner of Europe as well as a short trip to China.

Daisy has supported well known artists such as Howe Gelb, Karima Francis and Jenn Bostic as well as booked her own tours in the US and Poland, not to mention label tours across Germany, twice a year since 2009.