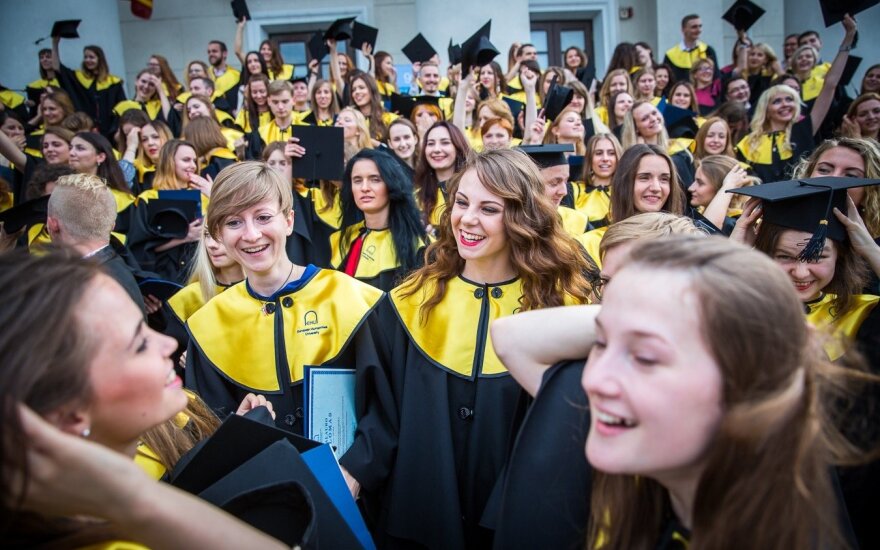 The commencement ceremony took place in the very heart of Vilnius Old Town - St. Catherine’s Church, which was reconstructed in 18th century by Johann Glaubitz, founder of Vilnius Baroque School. EHU remains committed to both the European tradition and Belarusian roots, which is why the ceremony venue was very symbolic - it is here, in the old town of Vilnius, the Belarusian national revival began.

EHU President Prof. Anatoli Mikhailov, graduate of EHU BA program "International Law" (Class 2009), a specialist in the field of space law and present member of EHU Governing Board Artiom Anisimov and Acting Chair of the EHU Governing Board Anne Lonsdale addressed the graduates in their welcoming speeches. Artiom Anisimov wished the graduates to be confident in the face of future challenges and always remember their alma mater: “I became of the first EHU Class in Vilnius – we were just preparing foundations for our University after its re-location to Vilnius. Today I see the largest ever class, which is the brightest evidence, EHU genuinely forms European future of Belarus. Do not lose your ties with Alma mater – together we will create even better EHU for the prospective students, who are starting EHU studies on October 1”.

The results of the annual voting for the nominees of EHU’s Distinguished Alumnus Award were presented during the ceremony. This year for the 4th time in EHU history the award was presented to Yeahor Zakharko (BA “Cultural Heritage and Tourism”, 2009). Yahor was rewarded for his contribution to the implementation of cultural and musical projects in Belarus, the largest of which is Mirum Music Festival – the biggest music event in Belarus.

The previous academic year was a landmark for the entire EHU academic community. In March, 2016, EHU celebrated the 10th anniversary of its operation in Vilnius, Lithuania. The total of 2,787 alumni have graduated from EHU since its establishment in 1992 in Minsk. 1,953 of them graduated after EHU’s relocation to Vilnius. According to the latest alumni survey, 62.2% of EHU graduates permanently live in Belarus, where they returned to after graduation. 83.3% of them have permanent jobs, which fully or partly correspond to the direction of prior studies at EHU.

On the same evening the EHU Alumni homecoming took place in Vilnius and welcomed over 200 alumni from EHU classes of all times.

Lithuania's government on Tuesday made the final decision on handover of state-owned premises in...

EU pledges to continue support to EHU in Lithuania

The European Union (EU) will for now continue support to the European Humanities University ( EHU ), a...